When my parents first got to Lisbon, we really had very little in the way of concrete plans set for the next 2 weeks. Initially, my mom and I planned to take the brunt of it, and the she got really busy with school and passed the task to me, and then I, knowing my lovely mother would want more input than she cared to admit, decided we would just “play it by ear” and plan as we went. That turned out to be a great idea, as it was that mentality that led us here. Originally, in our basic sketch of the trip, the plan was to head north and then take on the south, lounging on the beaches just before they arrived back home. Thankfully, our lack of concrete planning gave us the mobility to look at the weather, head south first and on our way up to Porto, stop in Serra de Estrella. It was my mom’s suggestion, and it turned out to be a highlight of the trip for all of us.

When we left Sagres, we took the back roads north, following our gps with limited success through beautiful farms, and ultimately, cork forests. The trees were BEAUTIFUL and made me really happy we had opted for a car rental instead of trying to take public transportation, as we were able to dictate our path by the scenery, and not necessarily the quickest route. We had decided to drive 3 hours (which took us almost 4.5) that night after recognizing an Easter morning/mass, and a hike around Sagres would leave much of the day depleted for getting to our next destination. We ended up staying in this little rustic farmhouse in the middle of a very rural area south of Lisbon by about 2 hours. We were tired, and not expecting much from our stay as it was simply meant to be a stopping point before our journey the next day, but once again, the people of Portugal showed their true colors and made our stay quite memorable.

As I mentioned, Google maps seemed to be bugging out for some reason, and while it got us CLOSE to our final destination, we couldn’t find it. The “address” had no numbers (not google’s fault!) and after driving around in circles for a bit, we ended up calling our host who came with her dad (who spoke no English) to pick us up. Minutes after walking in the door, she was back donned with beers and sparkling soda. She had left fruit and snacks and overall, just made the place feel really warm. We stayed up for a few hours, calling the boys to wish them a happy easter and hear about the delicious feast they had cooked up for themselves (while we ate kettle chips, cheap (yet delicious!) wine I had picked up from Aldi, beer and cheese), checked in on my grandpa, who had just had his 2nd knee surgery, and called to leave a message with my Aunt Lisa who was scheduled for major surgery the next day. The next morning after showers and coffee, we decided to head out. My dad really wanted to say goodbye to our hosts before we left to thank them for the great stay. We ended up talking (through translation from his daughter) with the man for almost 40 minutes, and were given a bottle of Moscato as a gift from him as we were leaving. Again, unbelievably thankful for his kindness and warmed yet again by the Portuguese, we were on our way.

Driving north, we decided to stop at Fatima for a few hours because it was something my dad really wanted to see. It was not quite what I expected, but it was quite well organized complete with a walking “Pilgrim tour” which led us around the compound, to a museum, various sanctuaries, a church and a candle prayer station. We stopped for lunch (one of the best we had had yet on the trip) and had traditional Portuguese grub – my parents some sort of creamy beef with mushrooms and fries, Kevin and I something akin to Grandma’s pot roast and another pork dish, which we split. On the road again, we headed a bit east as we prepared to climb Serra de Estrella with our 4 cyl. Toyota Yaris.

When I put in the address for our next location, I will admit, I didn’t do great work. Over the course of the last 8 months, the importance of double checking the location and confirming with the Airbnb map had become abundantly clear, as there were multiple times on this trip when the two locations were literally miles (if not hours) away from each other…and yet…I knew better, but I simply dropped the address in anyway, and off we went. Up, and up and up and up we went. Winding around crazy corners, making jack-hammered 210 degree turns up the mountain as oncoming traffic zoomed upwards, we (in the back seat anyway) were all pretty much scared shitless, not only that our car would literally not make it up, but also that my dad (who honestly did a spectacular job of driving the entire time) was going to run us off the road gesturing like crazy at the beauty surrounding us. It truly was a spectacular, spectacular drive (despite my mom inhaling sharply and gripping the back seat every 20 seconds, scaring me half to death). After almost an hour of driving (what felt like) only UP, we finally made it to our stop, only to walk in and learn we were an entire mountain range OVER.

So off we went, yet again, this time going down, down, down – only to (again!) go up, up, UP. Only this time, it was getting dark and we had virtually no cellphone signal in the mountain range.

Not that I was ever TOO concerned (no surprise there, right?), although I did feel quite bad about the whole thing, we finally pulled into our not-so-humble-castle-like-abode with dark skies and nothing but stars above us about an hour later. You know, you look at photos of the place online, but really nothing can translate just how cool (or lame) something is until you actually see it for yourself. It turns out, this place was incredible and right out of a storybook. Unfortunately, due to my mistake, our host had to leave to take care of business in the next town over and had to drive back to meet us about an hour later. He told us where to find the key and to “make ourselves comfortable” in the giant cave/castle that was all for us. We opened a bottle of wine we had and some crackers and waited for him to come back. After a bit, he came back and after apologizing a great deal for our tardiness, we unloaded our stuff and were given a tour around the place. Again, it was awesome. Apparently various Portuguese writers had holed themselves away here using the space to write novels and poetry, which was not surprising if you saw just how inspiring this place was. He had made this (really strong yet) amazing cheese for us and left another bottle of wine for us to enjoy, and was on his way. We stayed up, snacking on anchovies, cheese and pasta (which we had picked up from Lidl a few hours before). It was a great night.

We woke up the next morning and decided to have the breakfast he offered us the night before with a German couple who were staying in a much smaller house below us (which sadly, I seem to have no photos of!).  We feasted on local cheese and sesame crackers with honey. 4 types of breads, homemade jams, 2 different types of amazing tea, coffee and an egg dish made by the chickens living on the estate. We talked and talked to the German couple and had a really perfect morning. After breakfast, we checked out where they were staying – which was WAY smaller but AMAZING. Their place had access to one of the natural pools cascading down through the valley that you could only get into from inside the house. It was awesome.

After breakfast and our tour, we decided to go hike around and explore our surroundings. We ended up hiking down to the valley and spent the afternoon jumping rock to rock and swimming in the frigid mountain water. Kev was the first in (no surprise there) but my dad quickly followed. I didn’t post pics of him in the water, as I’m sure I’d never hear the end of it. My mom read while my dad napped and Kevin and I explored and played cards on the flat rocks. Not to be outdone by the boys, I stripped down and jumped in the freezing water too (if only for a few seconds). It was a perfect afternoon. Hiking back up the hill, we found a geo-cache (my dad did :)) and headed back for some reading by the fire, lengthy conversations about how to streamline my dad’s technology usage in his office and drink the Moscato from our previous host. All in all, Covilha and Serra de Estrella turned out to be an unexpected highlight for all of us, and one we would have never had had we planned our trip out before we came.

Mom testing out the Moscato. 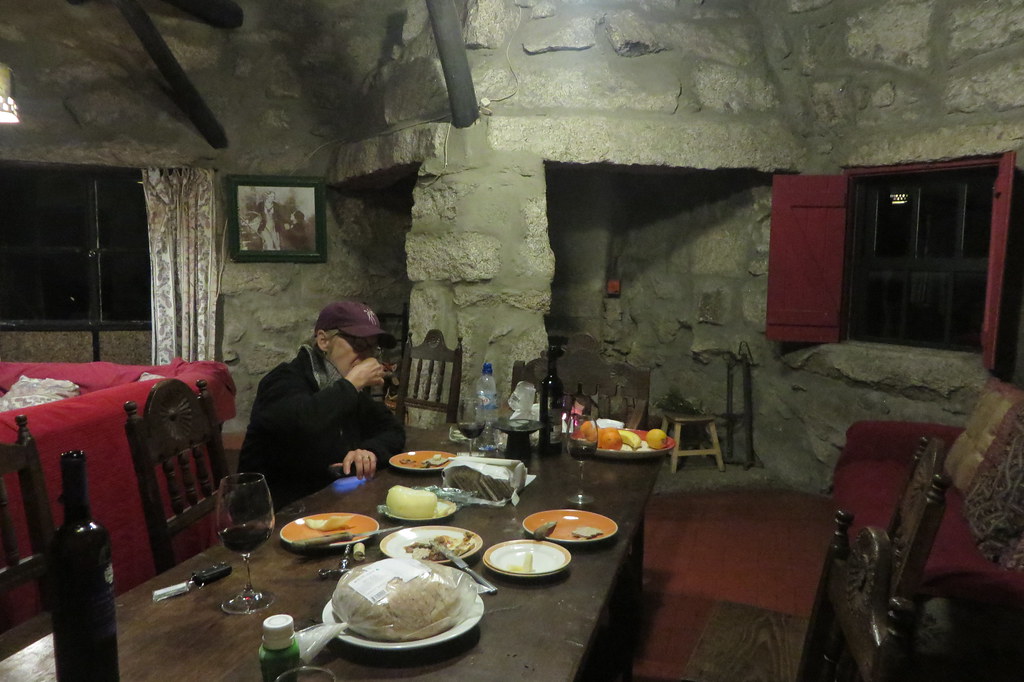 Morning reading by the fire. 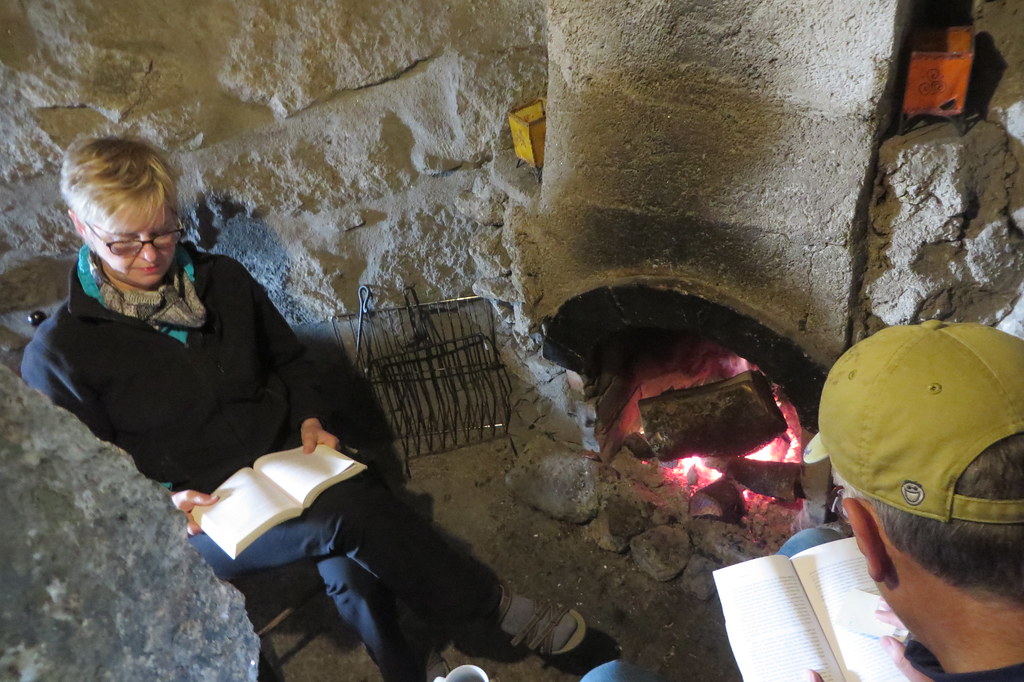 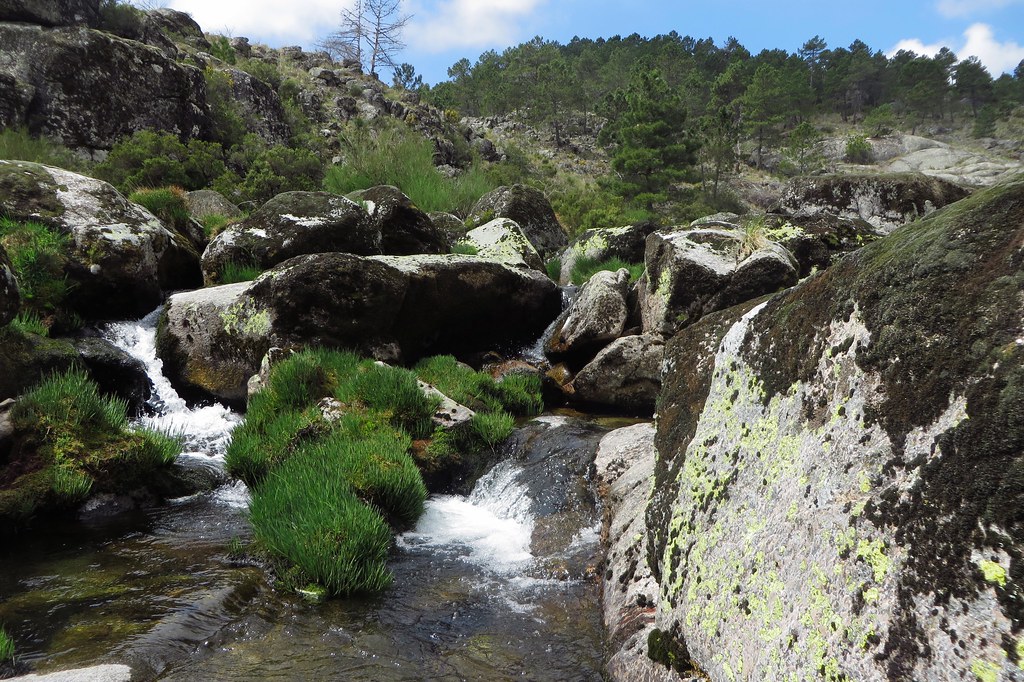 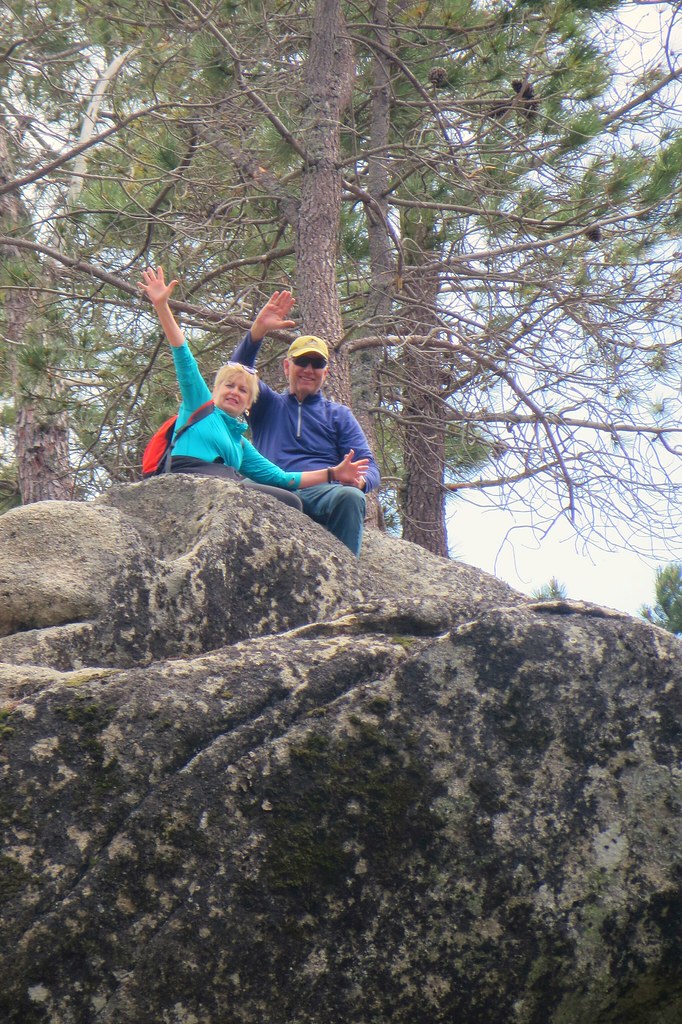 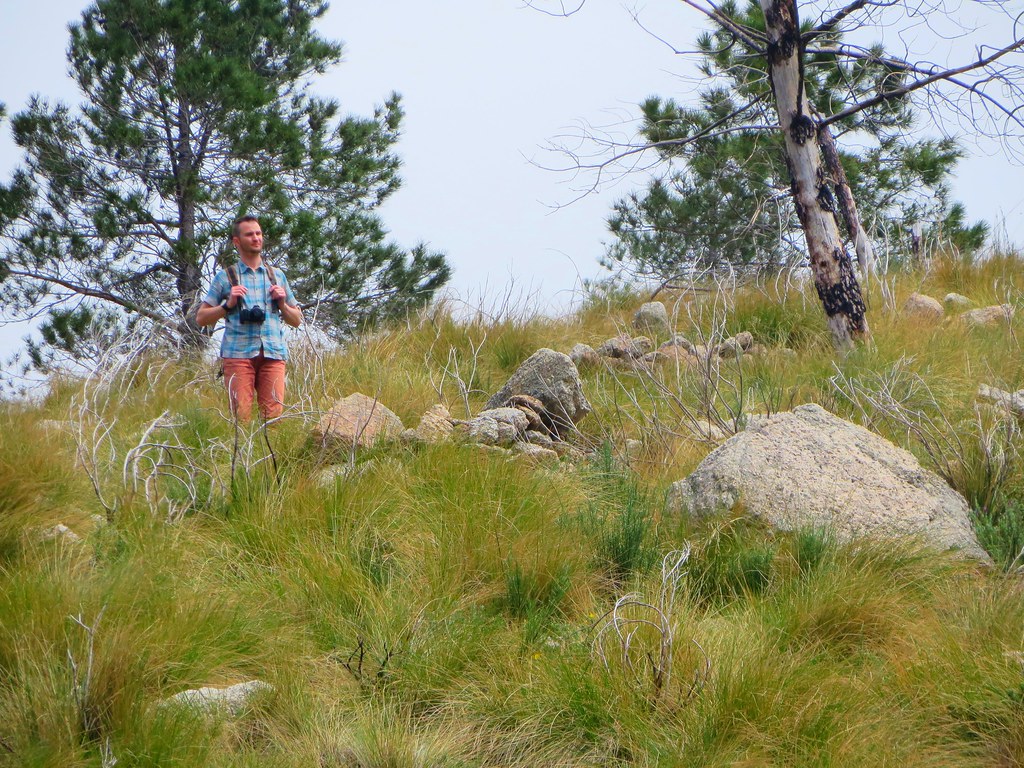 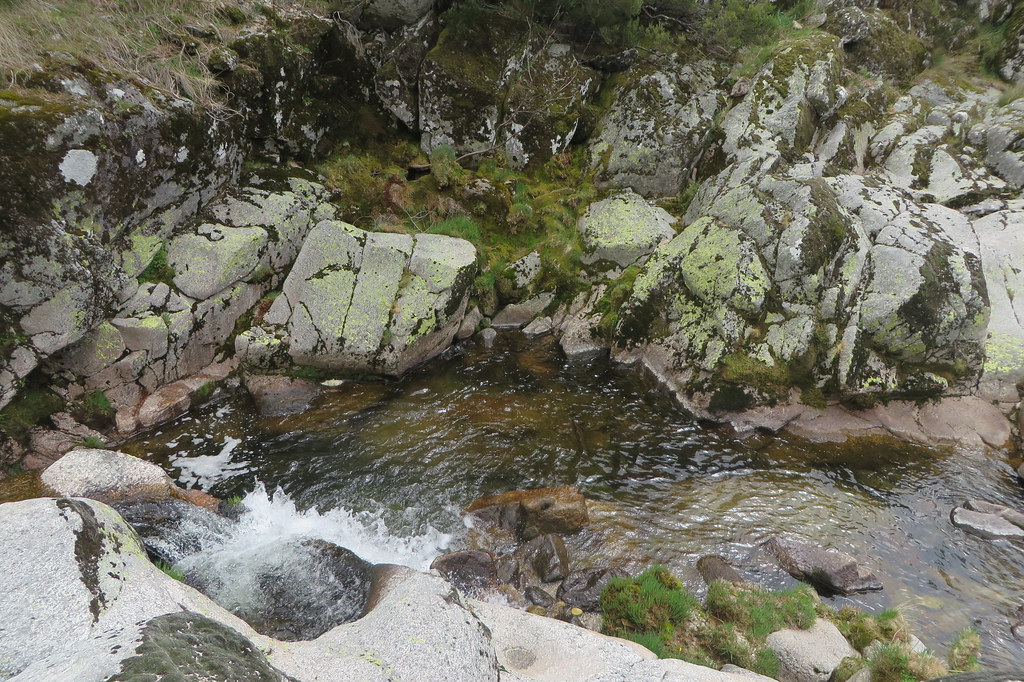 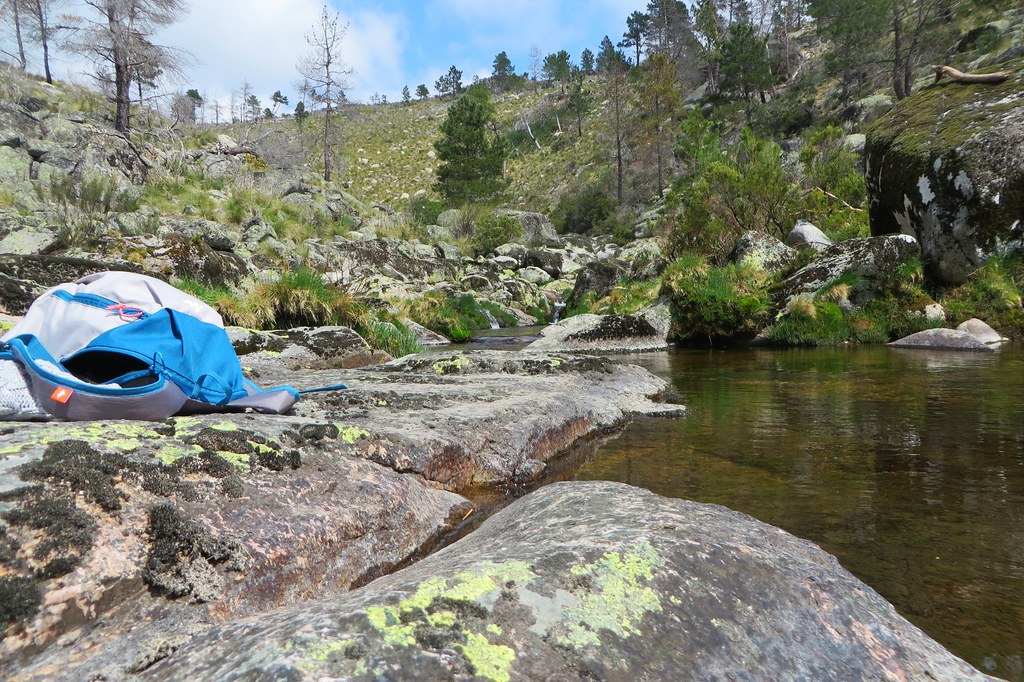 Showing how tough he is. 😉 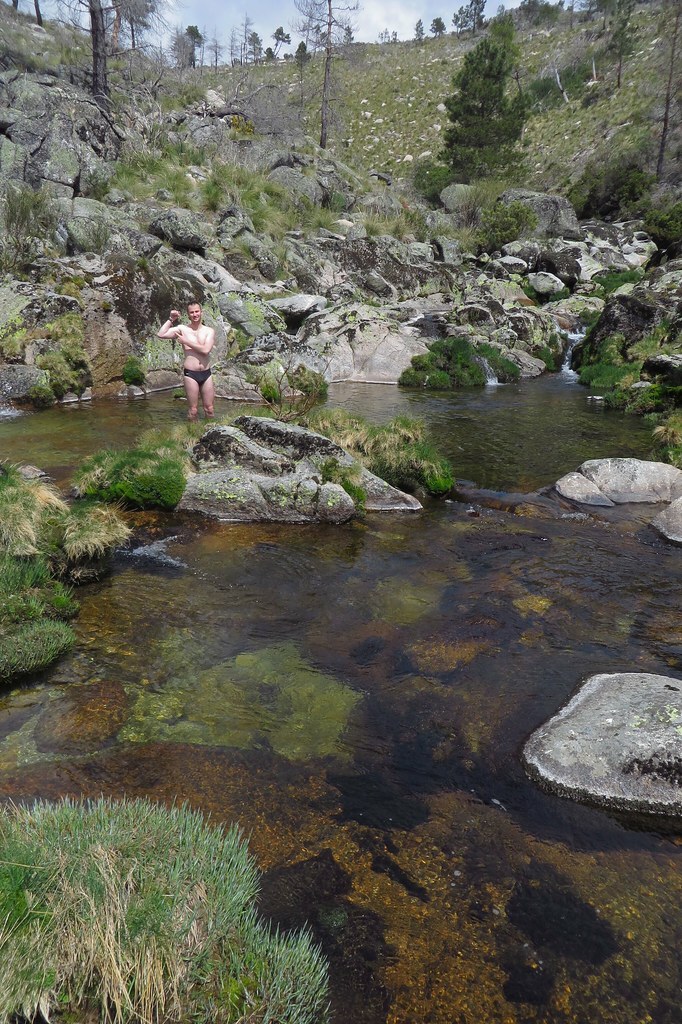 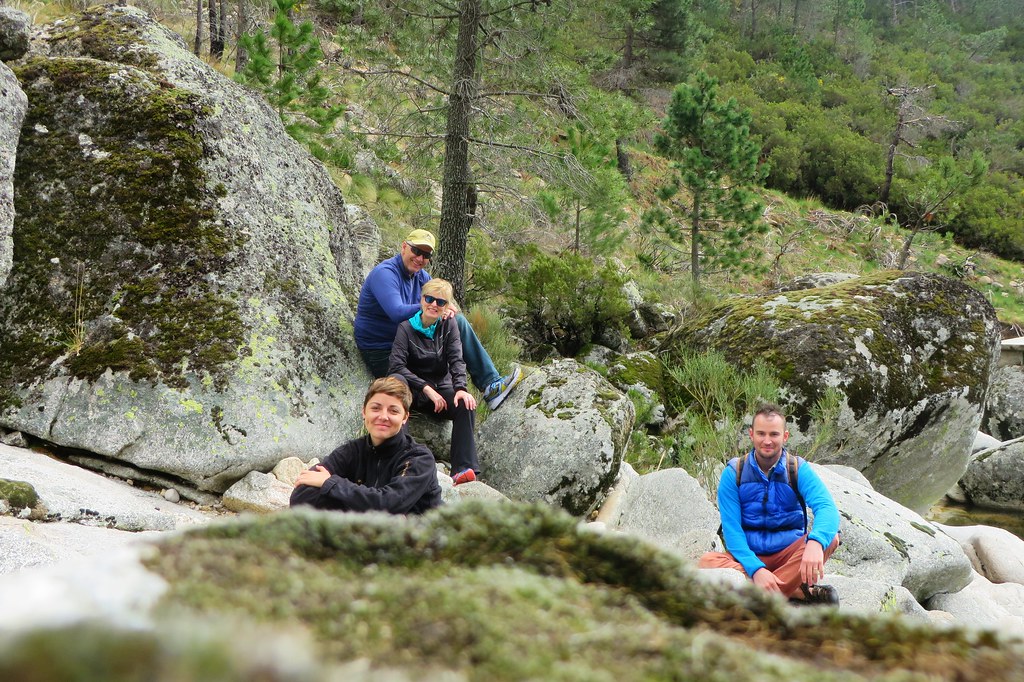 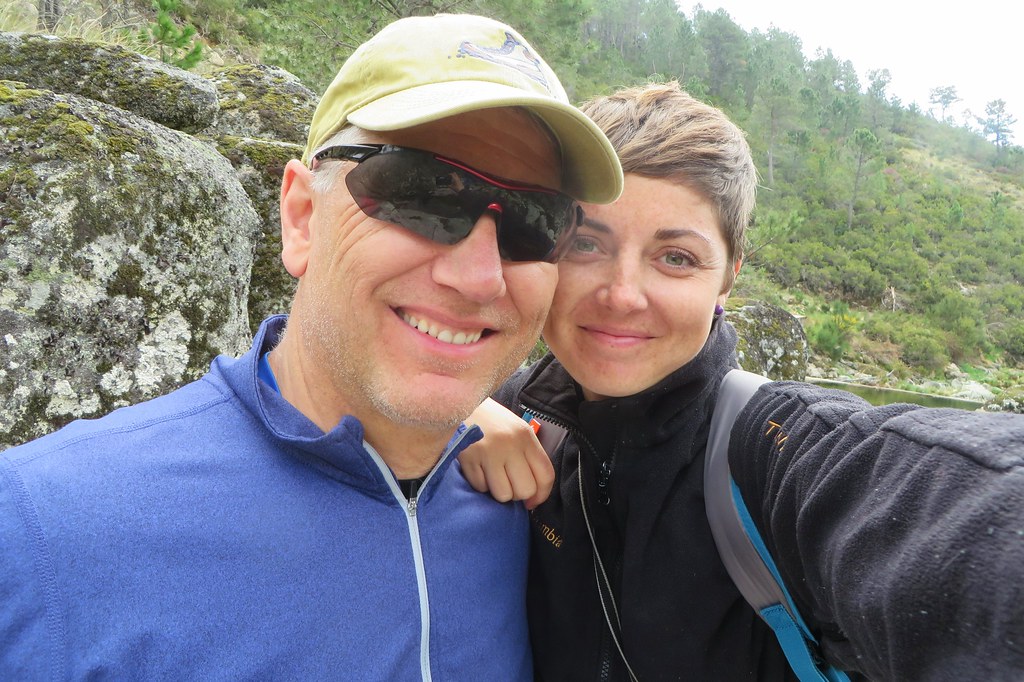 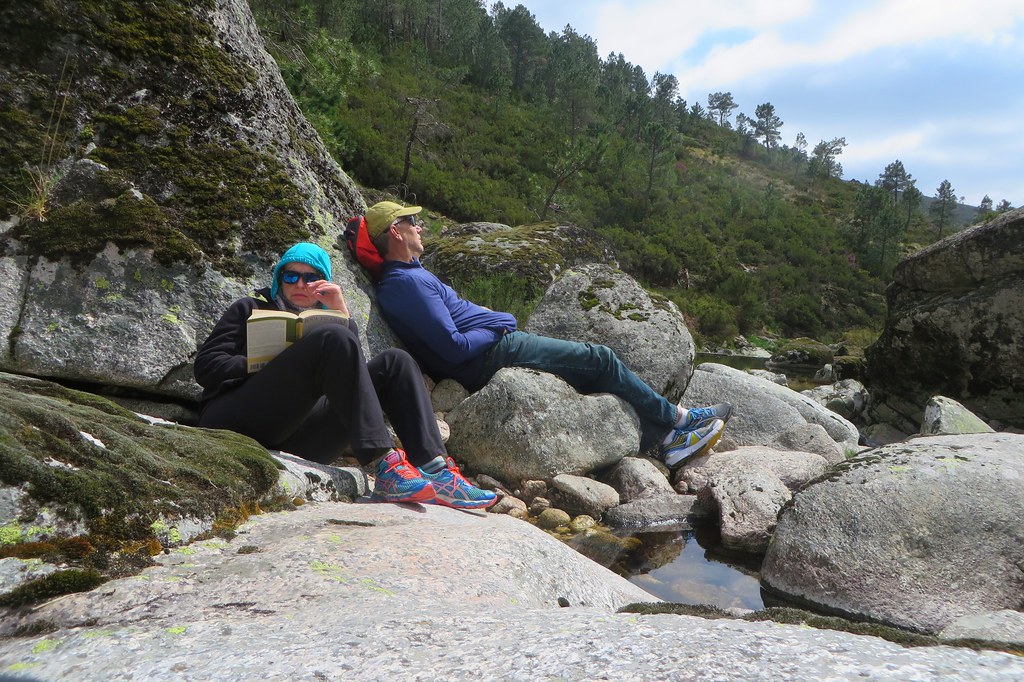 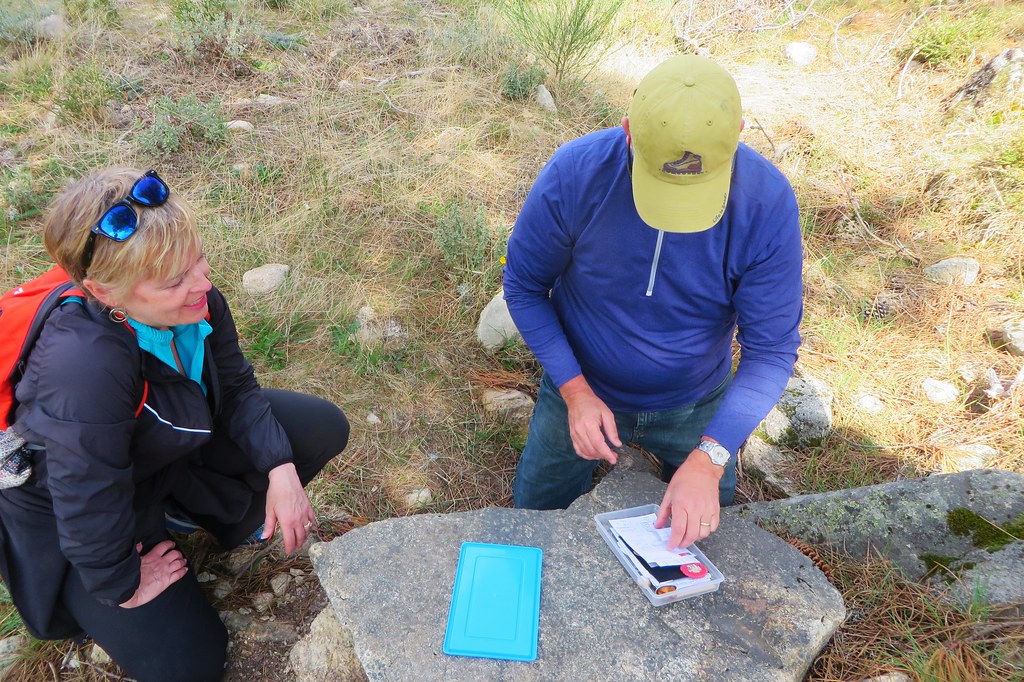