From France, we went to Amsterdam via bus which was uneventful. Lindsay slept the whole way, I did some programming stuff, I got a coffee, and we ate great salads that we bought at a grocery store in Paris (mine was some sort of smoked salmon + rice + wasabi mayo, Lindsay’s was some sort of quinoa/hummus/edamame something-or-other).

We arrived in Amsterdam around 8 in the morning and took a train from the bus station to the central train station. One pretty nice thing is we had some random guy come up to us and give us a train ticket that was good for a week (though only during non-rush hour) for free. I think he was a fellow backpacker. It was nice of him. 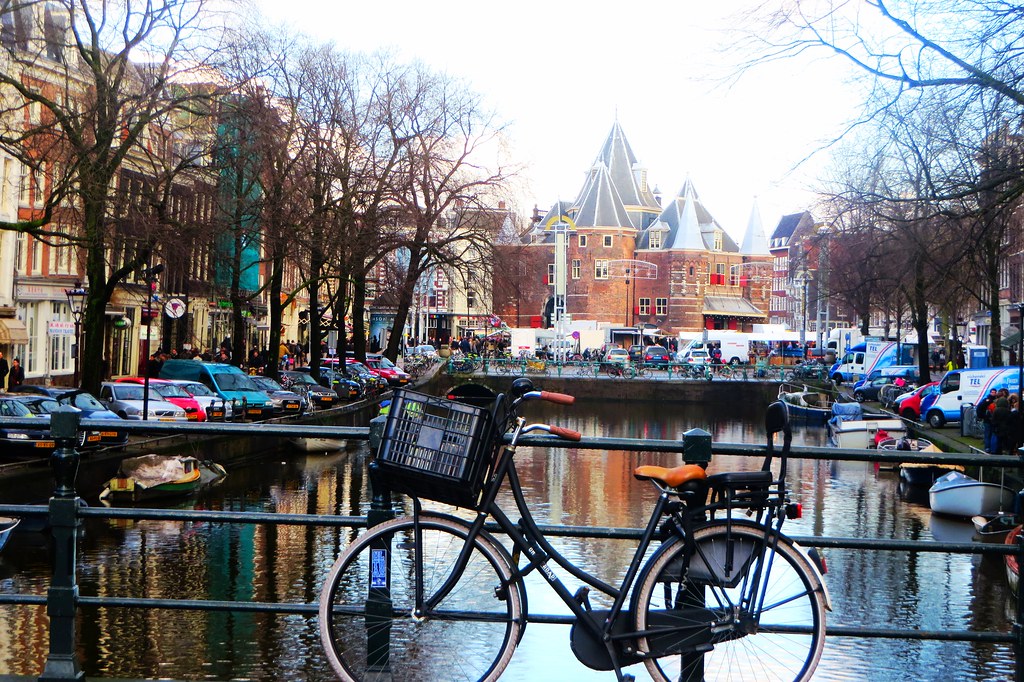 Amsterdam is a city that I really like, and Lindsay also really likes now. She says it’s the most beautiful city she has ever been in. Grated, she still hasn’t been to all of Europe yet, but still, I have to agree, it is pretty beautiful. For me, having never been to any of the Nordic countries, I imagine this is a taste of what it would be like. Everything is sort of, I don’t know, Ikea-ish, but in a super quality sort of way.

The food was great, there were bikes and young people everywhere, it was super walkable, and the Anne Frank museum was worth the trip alone (according to Lindsay). I didn’t go to the museum because she bought a special “Anne Frank tour” ticket online, and there only happened to be one ticket left during the days we were there. She had read online that there is typically a line wrapped around the building that people stand in for hours to get in (which it turns out there was, in the sleeting/snowing/crappy weather), and to avoid that, and get the most of her visit to the museum (she was really interested in it for her teaching stuff) she bought the ticket for herself and I decided I’d go hang out and do something else, which I felt good about. 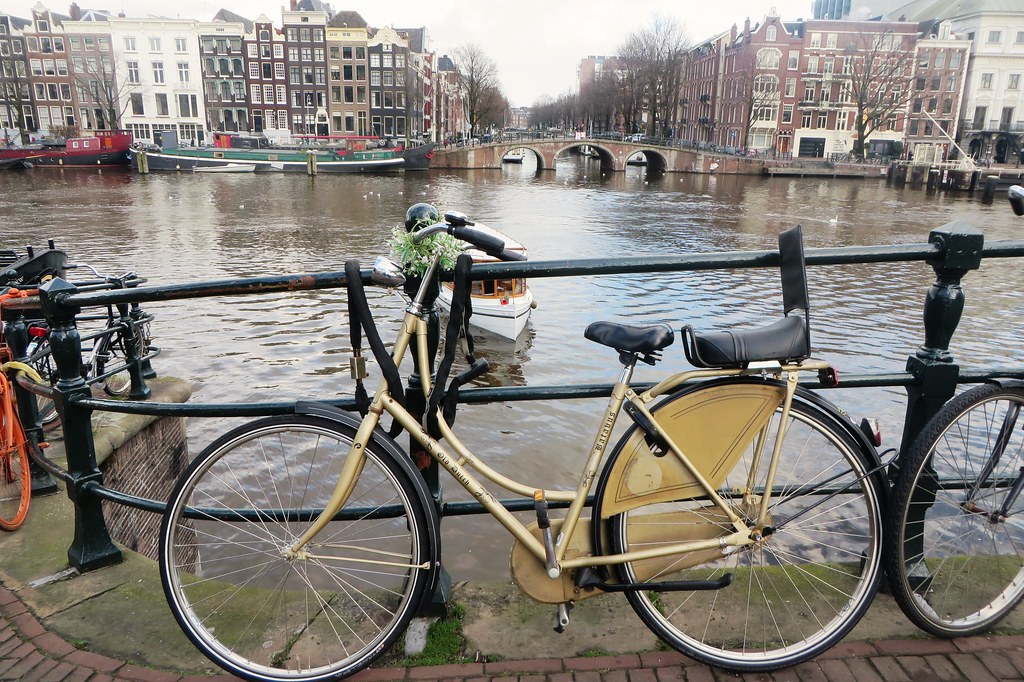 So, below is a random picture that doesn’t really demonstrate what I’m talking about (in regards to the awesomeness of the city) unfortunately (we didn’t take many photos on account of there being a lot of snow/sleet and trying to keep the camera dry), but basically Amsterdam has what I imagine is a taste of what some of the Nordic countries have. BTW, I know we would both love to go to Iceland, Sweden, Norway, Finland, etc, one day. 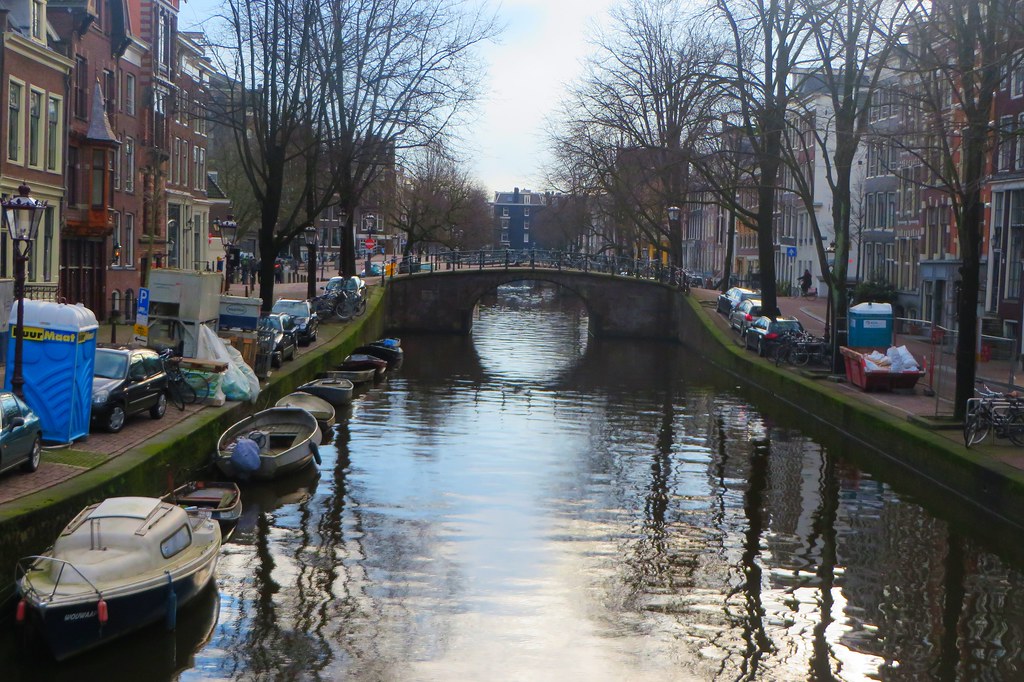 Anyway, upon arriving in the city proper we walked a kilometer or so to our hostel. This hostel happened to be Intersail hostel, which is a boat. I sadly didn’t get any pictures inside of the boat/ship, but it’s pictured here on the right side (you can’t see it super well :(). 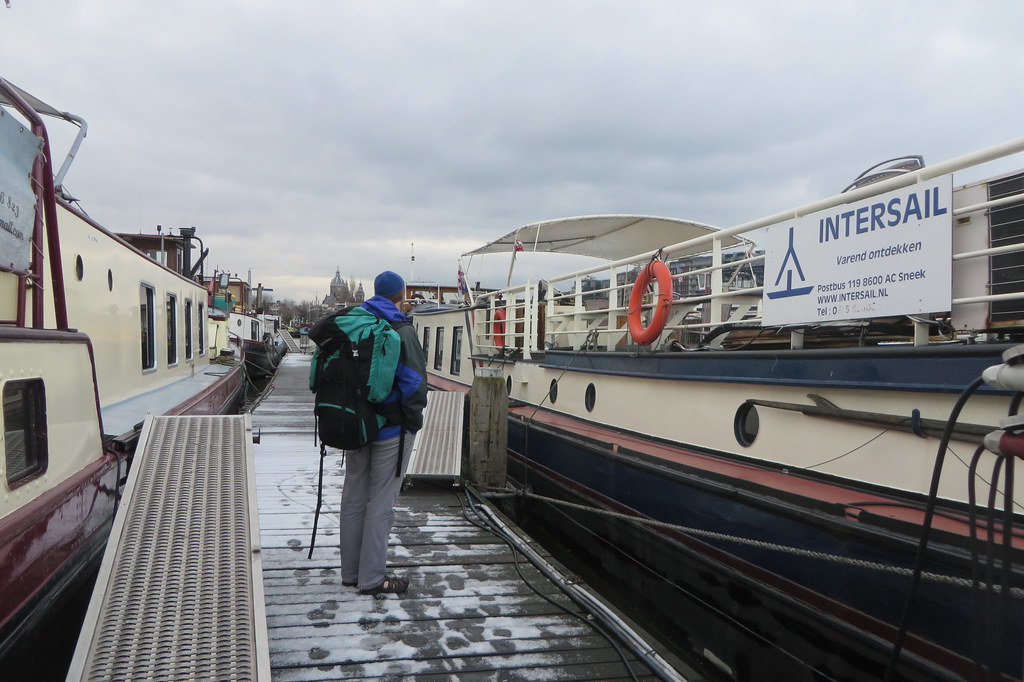 Before I type more, let me say that I agreed to not bitch too much about Intersail Hostel here. Lindsay told me “two sentences max as this is water under the bridge, and isn’t what we really care to remember about Amsterdam”, but it’s going to be a few more than that. I’m typing this out mainly in hopes that if somebody ever googles for Intersail Hostel Amsterdam Reviews they might find this and at least know what happened!

When we arrived at Intersail to check in, I was told by Christian (sp?) that we had booked two rooms. I said, “I don’t think so.. I’m pretty sure I only booked a single room for two nights!” Christian, being a nice guy, said, “hmm… ok!” and showed us around the boat. You can see me in this exact moment: 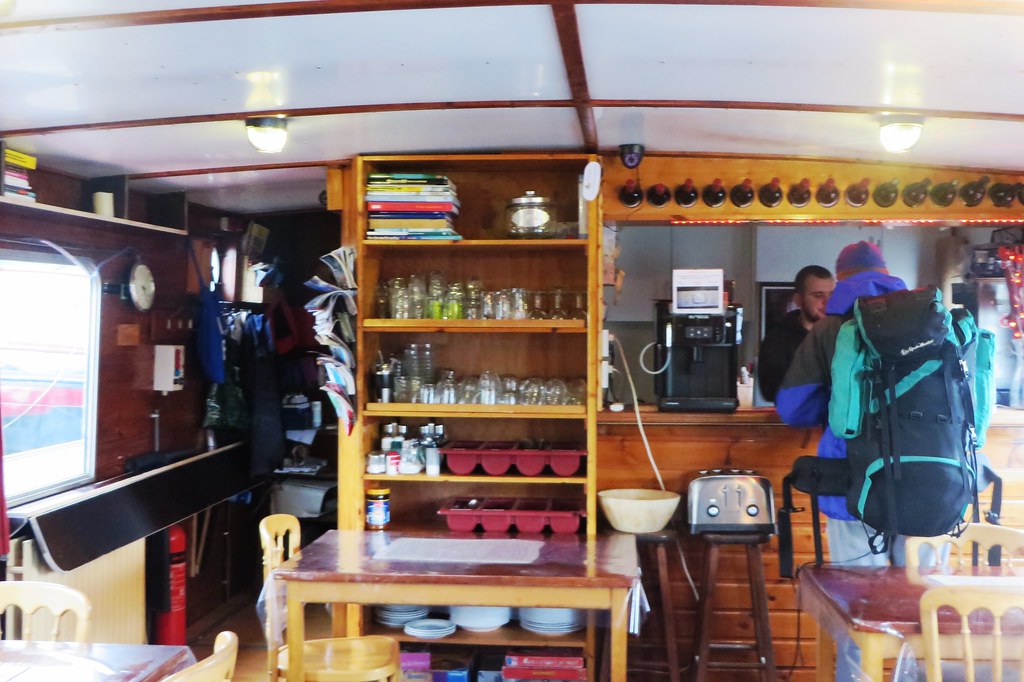 Click here for more about this, if you are bored or want to hear me bitch

Anyway fast forward a few hours, I came back to the hostel and Christian told me that he had talked with the manager/owner, Tommy, who had told him that no, I had in fact booked two rooms and that I needed to pay for the second room. At this point, I figured, “oh shit, maybe I messed up and booked two rooms somehow!” and so I got out my laptop and double checked. I checked my email (where I had a confirmation email from hostelworld.com showing the correct 1 room x 2 nights reservation, and only one!), I logged into my hostelworld account and verified that I only had a single 1 room x 2 nights reservation. I checked my bank account and verified that I was only charged the amount shown on the other communications/records (email, hostelworld.com account, etc) for the deposit for the 1 room x 2nights. I showed all of this to Christian, and he said he’d call the manager (“Tommy”) who was on vacation to let him know.I want to be clear that I did and have sense absolutely racked my brain to try and figure out if there is somewhat I could have made a mistake and booked a second room. I tried to think of any way I could have made a mistake, because I WANTED to find out that I had made a mistake so I could just pay some money and be done with the whole issue. “Damn, I made a mistake, I guess I’ve learned not to do ______ from this experience. Oh well.” But I could not figure out where my mistake was. And I can’t. And not a single piece of evidence I can find points to any sort of mistake on my part!

The next morning (our first and only full day), Christian told me that he had talked to Tommy, and Tommy said that he had two separate bookings from hostelworld.com and that, unfortunately I’d have to pay for the room for the first night (60 euros). Now, I’m not one to generally get angry, and I’m guessing for most anybody reading this the scenario I’ve setup wouldn’t make you feel angry, but to be told that I was going to have to pay some relatively large sum of money for something I had seen no evidence (despite my best efforts) showing any fault on my part, I was super pissed!

I told Christian (who for the record was a super nice, quality, cool dude who I felt super bad about him being in the middle) that I was sorry, but I just wasn’t able to pay for something I had no evidence of having agreed to pay for, and that if I needed to I would leave the hostel if they wanted to refund me (else I figured I could always take it up with the CC company worse case) but I was sorry but I just wasn’t going to pay for something I didn’t agree to pay.

So, Christian ended up calling Tommy (in Thailand) and have him talk to me on the phone about the whole situation. Now, for the record, I imagine a hostel like Intersail gets a pretty mixed crowd and I don’t think that Intersail, Tommy, or anybody else was trying to screw me out of 60 euros, at least not on purpose. I said as much to Tommy. I ended up spending an hour talking with Tommy, walking him through all of the emails/account info/etc that I looked at to figure out what had happened, the process I went through on hostelworld.com, etc. He requested that I send him a copy of my bank statement (which I did, despite feeling annoyed to say the least to be agreeing to such a request!), emails, a screenshot from my hostelworld account, etc. I did all of this. And I told him that I would happily pay for my mistake, but he’d have to have hostelworld.com contact me and tell me exactly how I had made this mistake (because again, I just don’t see how it’s possible).

Anyway, that’s where it’s been left. I’ve recently emailed Tommy again to ask him for an update because I wanted to leave a (generally positive, the hostel itself was great, Tommy himself was even a pretty nice guy, and Christan, our host, was super nice and friendly) review. So we’ll see.

We were in Amsterdam for 1.5 days. It was amazing. We ate more fries with mayonnaise then I can believe. We walked around and explored the city. Lindsay bought “cute boots” at a flea market. She went to the Anne Frank museum and ran around the water canals.  We ate pizza. We met a bunch of cool people and drank beers and chatted in the hostel. 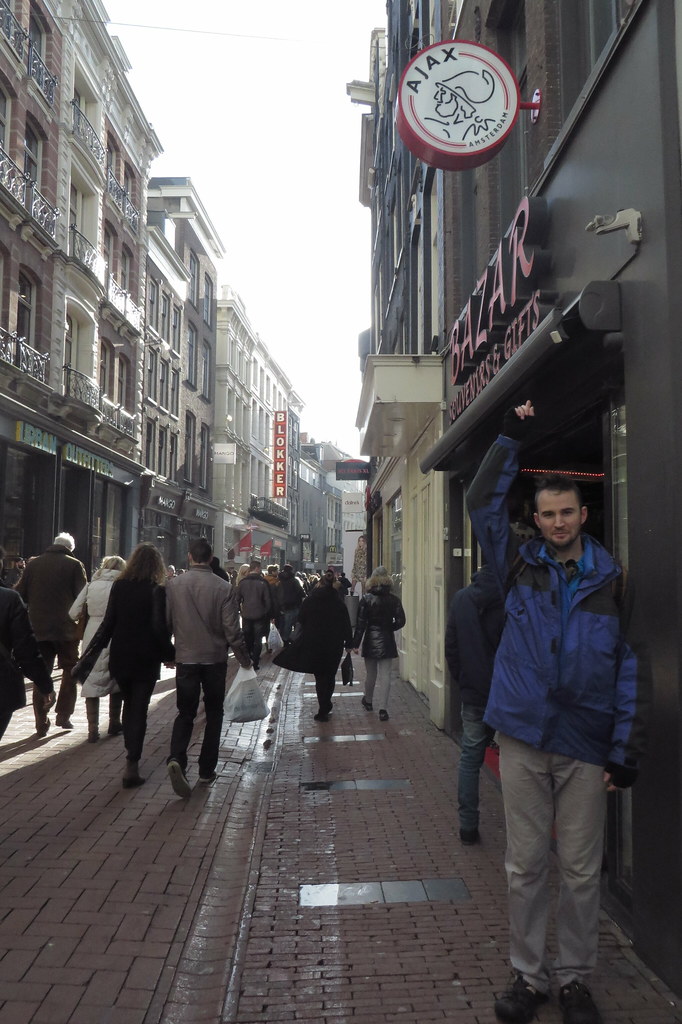 We ate little “pancakes” with syrup on them 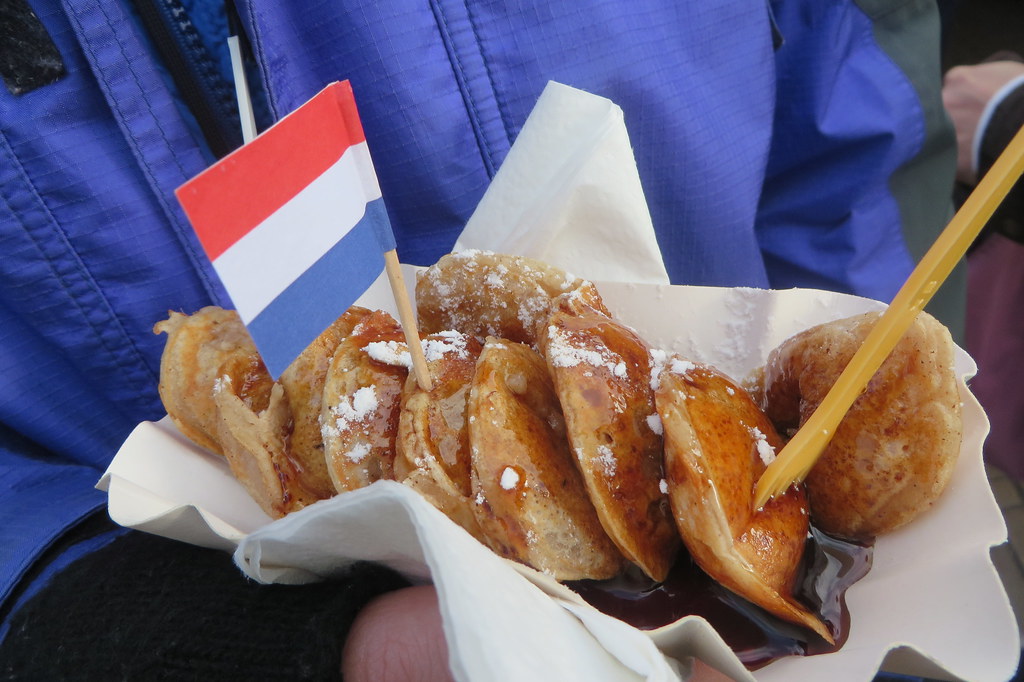 We watched the sunset on the water 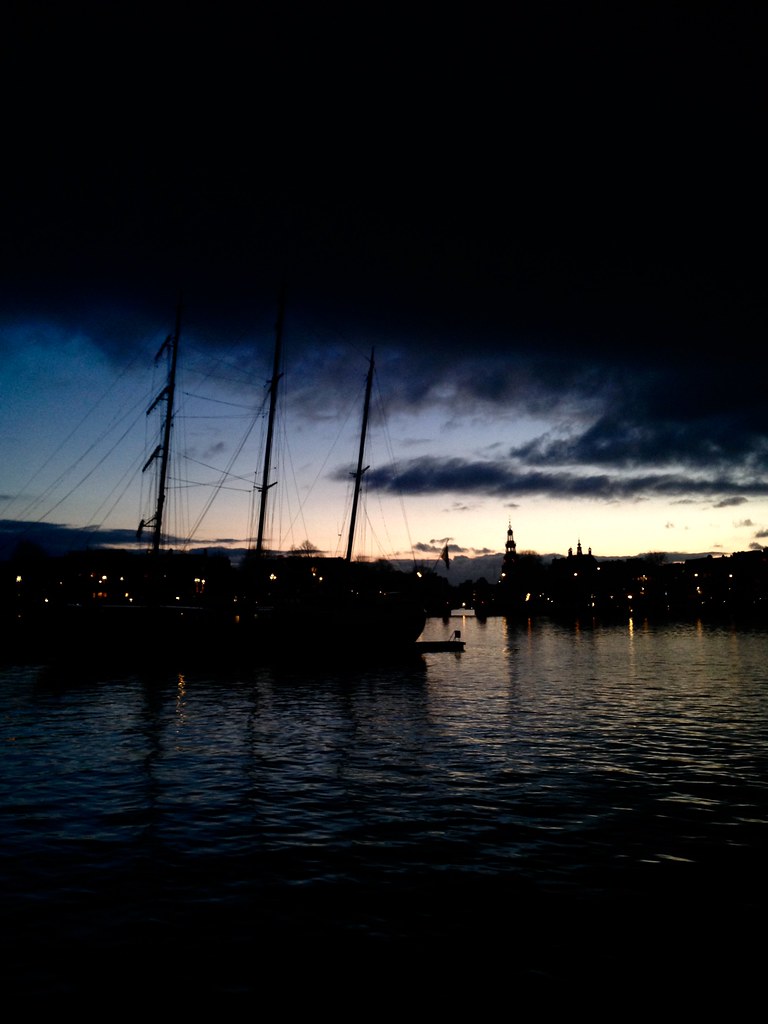 We ate from one of those FEBO machines, even though I completely forget that they were a thing until I saw them. 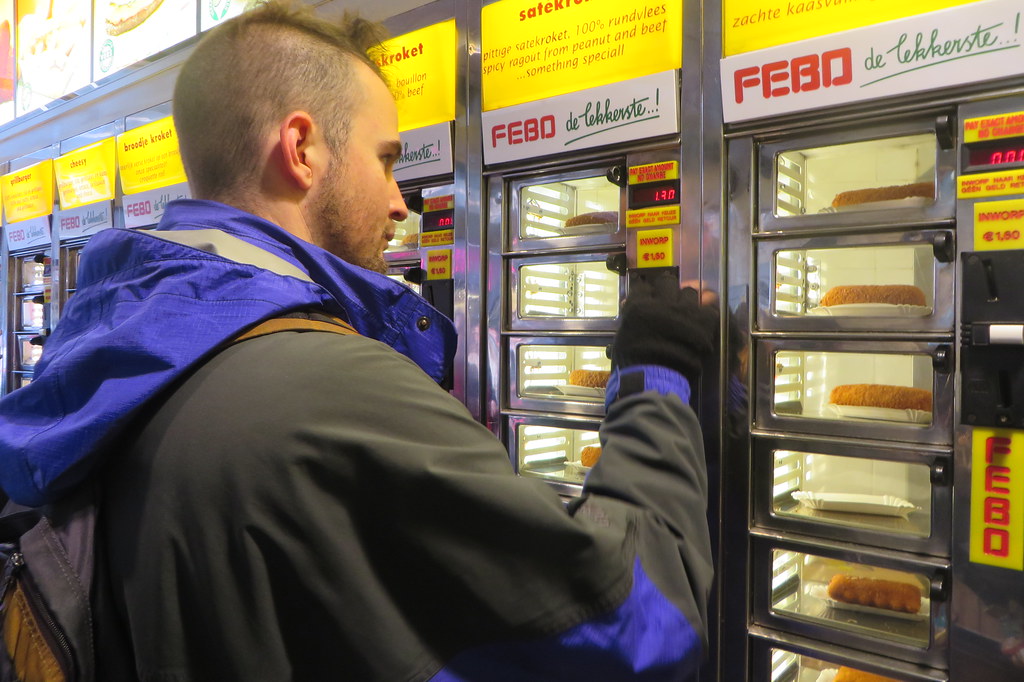 We ate a TON of stroopwafels, which (hello Mom, if you are reading this!) my Mom loves, or at least used to love (though I don’t you’ve made them as much the past few Xmases? Perhaps they are a ton of work, if I recall correctly). They have since become Lindsay’s favorite sweet treat. 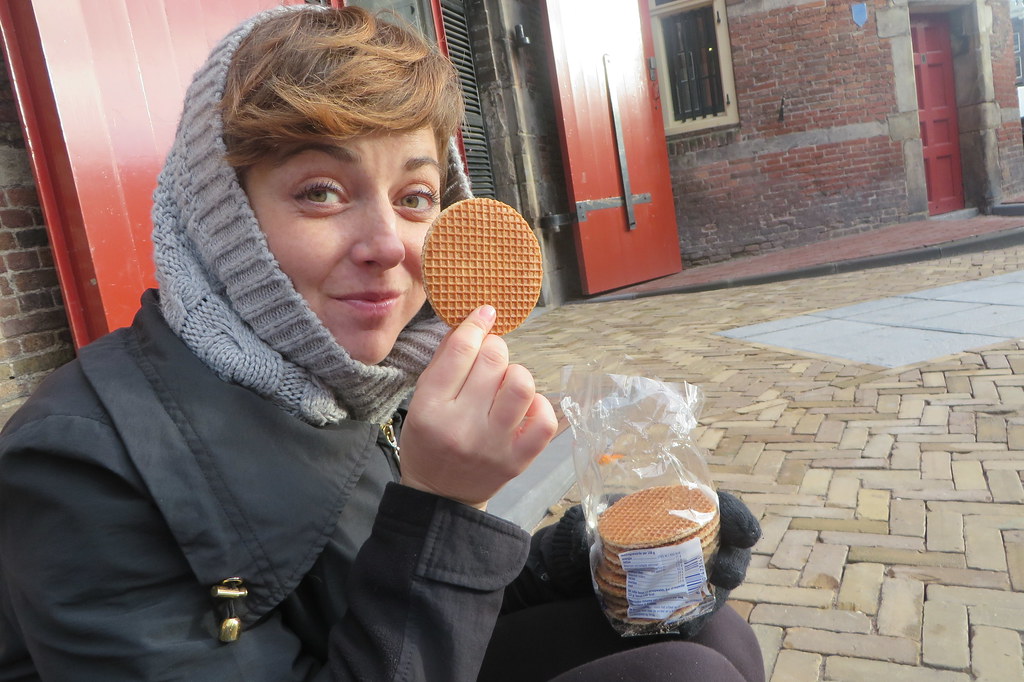 And, although Dave may not be reading this, I thought of Dave (who I went backpacking with through Europe in 2003 for 5 weeks after high school!) and found Vla, which many people don’t believe exists (I’ve even talked to people I’ve met from the Netherlands who have no idea what I’m talking about). It’s basically drinkable pudding, by the way, and I think it’s great. This container was like, USD 0.90. 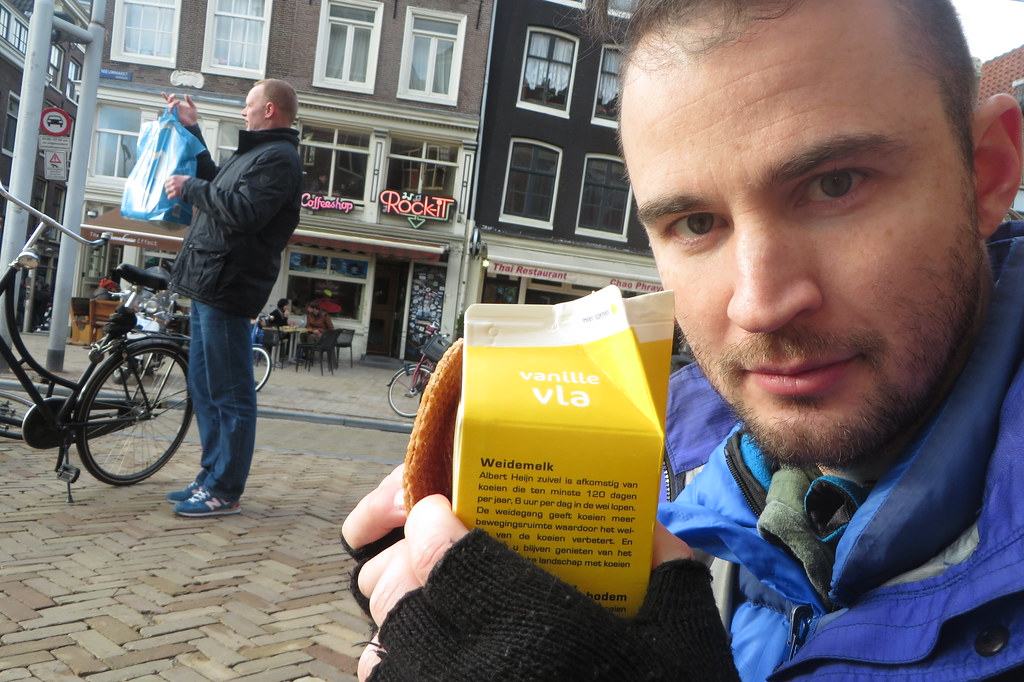 We also did a lot of the standard Amsterdam things, like walking around the Red Light district which was as surreal as ever. Honestly I enjoy it because it’s such a surreal experience and at least in my life it’s a pretty strange thing to be walking next to a family with kids who are on their way home, past windows with nearly naked people in them. 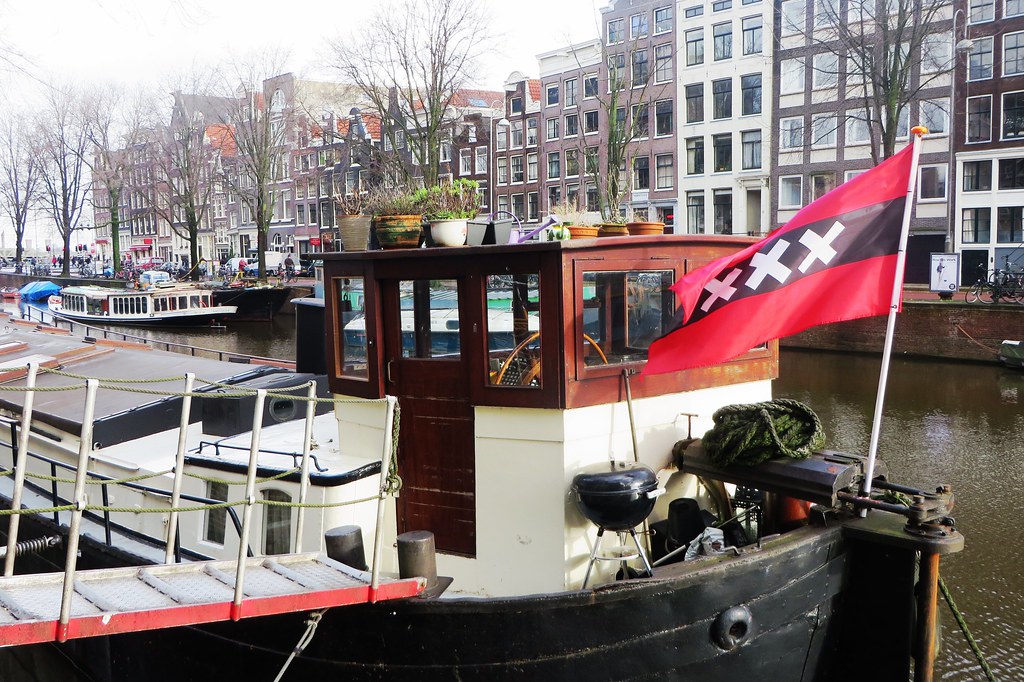 I feel like I’ve done a bad job explaining our time in Amsterdam. I’m sorry.

It was short, it was beautiful and special and different from other cities. The food was great, the Anne Frank museum was great (again, according to Lindsay).

And then, after this crazy terrible blog post, we flew from Amsterdam to Zagreb, Croatia.