Well, we’ve done it. We are on the road. Currently writing this blog post from my cousin Alicia’s kitchen table [edit: this isn’t actually correct any more, but I wanted to finish this post and post it for historical purposes anyway – we’re now in Sault Saint Marie].

The past few days were a bit of a whirlwind, although that’s a bit of a cliche. I think. Honestly, maybe it’s not, I don’t know.

Let’s call it a whirlwind. Basically, I worked up until Monday, June 30, and cleaned and packed. And when I wasn’t doing that, I was saying goodbye to great friends/people. The weekend before we left we painted the walls in apartment, fixed holes, replaced blinds, etc. Frankly the entire process was a little frustrating as we moved into our apartment taking over somebody else’s lease and the apartment was never cleaned or painted originally. Much of the paint on the wall was pealing, not because of our use or misuse, but just because the paint had been applied poorly some 4+ years ago. One night we were up until around 1 am painting walls. It got to the point where we literally DUMPED paint from the bucket onto flat surfaces (like our lofted bed) and rolled it smooth. And I replaced two different sets of blinds, which, let me tell you, was a pain in the ass. In the future, at least in my own house, I’ll buy the $15-$20 blinds instead of the $5-$7 blinds as they are about 5x more difficult to hang. Anyway, we packed our car. The car packing has been a bit of a touchy issue between Lindsay and me. In short, I wanted to have lots of room in the car so we didn’t feel like we were totally crammed in, Lindsay wanted to save money by getting more stuff in the car. We had more arguments then I’d care to admit about the car, over a greater period of time then I’d like to admit, but in the end we got everything fitting. We basically have the car packing down to a science, and at least the camping stuff we need on a daily basis (tent, sleeping stuff, cooking equipment, and food) is easily accessible.

I’m going a bit out of order here (it’s been really tough to sit down and write anything!), but basically after work on Monday we had one last night in Oakland. We had a sushi dinner at Ichiro, our favorite local sushi restaurant, and spent a few last hours cleaning and doing a check out with Dan, the manager at our apartment. Then we went to bed. The next morning we hit the road. 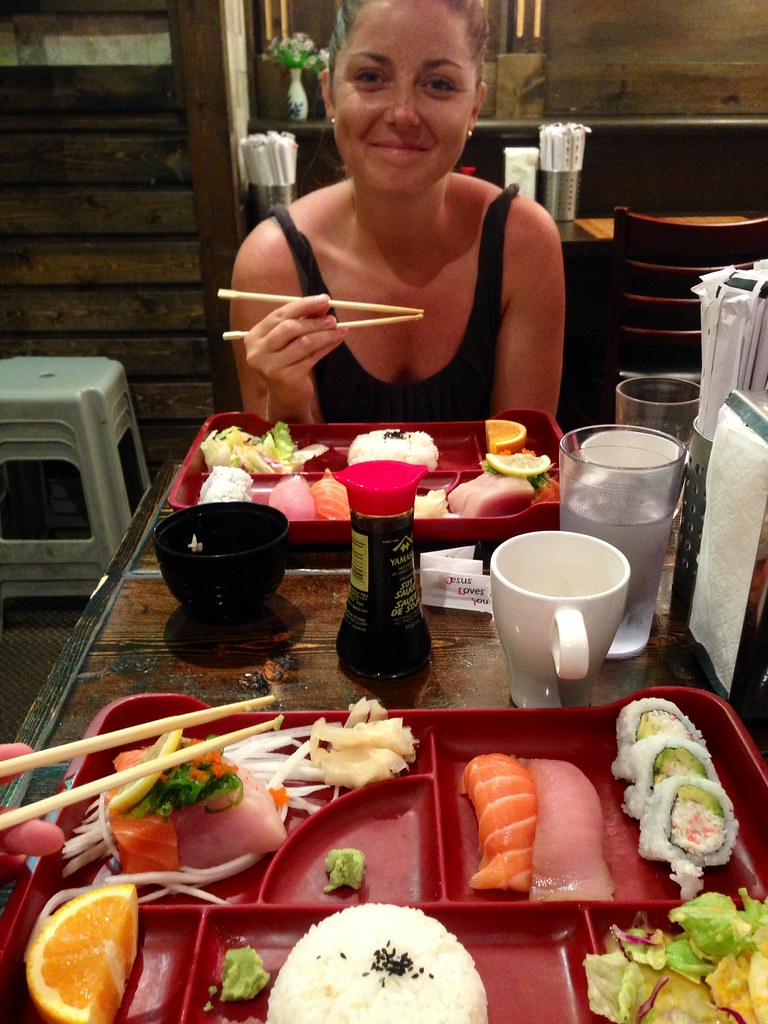 Not that interesting, but I have to say that at no point during all of this did I feel particularly emotional. Which is sort of sad really, because generally I’m a very emotional guy. I think the sad truth is I had SOO much going on in my head, so many little stresses (health insurance while traveling, figuring out what to do with our mattress before we left, money, canceling various things, etc, etc). I regret not having had the chance to “mourn” the loss of our life in Oakland. Since leaving, I’ve felt a bit of sadness from time to time, but I think that might just be the tip of the iceberg, so to speak. Oakland was such an amazing place, and I have so many amazing memories. I still can’t think of a better place to live.

Anyway, the first place we stopped on our road trip was Portland, Oregon to visit my family (Aunt Kim, Alicia, Justin, Jack, Charlie, Andrew, and Malia). We spent two and a half, three-ish days there and had an awesome time. My cousins (though I hope one day I might be called Uncle Kev) Jack and Charlie are awesome little kids and I’m very happy to have been able to see them for a second time. We went swimming, drank coffee, drank beer, etc. A very nice time. We started our real trip in Seattle – we camped in a pretty great campground called Saltwater State Park, which was great. On a whole, of the places we’ve camped so far, this was probably a nicer campground – we’ve for various reasons ended up camping at a lot of RV Parks which are generally flat, ugly places (that are easy to get to, relatively cheap for tent campers, and most importantly close to the cities we want to visit!). Seattle was great. We did a bit of research on the different neighborhoods within Seattle so that we could get a feel for the different areas within Seattle. We went to perhaps 4 or 5 different neighborhoods, walked around in some, etc. A highlight for us was Green Lake, which was a place for “power singles” and “power couples” (I mention this because I thought it was funny), had a really amazing lake (the neighborhoods namesake). It’s a bit tough to tell you how great Green Lake was, but it was just a super busy, high energy lake. Lindsay (or maybe me) described it as Lake Merritt with a nice beach and a raft with a high dive in it with swimmable, warm water.

Next up was Vancouver. Which we loved. Vancouver was very much a West Coast city, and especially as we drive East across Canada it becomes more and more clear there there is a different between a West Coast city and a Mid-West city. I’d say Vancouver is a city that we could very much live in. For one thing, it seemed really well organized, and clean! One of the small strange things that stuck out to me was that every garbage can in the city had a nice, high quality garbage bag in it. Coming from Oakland where garbage bags were done away with and in their place heavy duty inner garbage cans were used, I appreciated this. I’m not sure trash bags are as efficient, but even the garbage seemed cleaned. Vancouver also felt very multi-cultural. There were TONS of different accents and languages that we heard walking around.

It’s a bit difficult to explain how Vancouver felt. We were there for two days. It felt very different from the US, but I can’t say if that was all in my head or not. Everybody we talked with was friendly, and the place felt like it was healthy without being over the top or preachy about being organic or vegan or etc, etc, etc. The other thing that was a big confusing was that there were SOO many people outside in bathing suits, on the beach, etc. From what I understand, the weather in Vancouver is generally worse then that in Seattle, but we didn’t get a good sense of this because it happened to be an incredibly nice few days of weather when we were there. Even on a weekday, it felt like a busy day in the busiest of beaches. I went swimming (twice!) in the ocean, and Lindsay ran and swam both days we were there. This was all in Stanley park, which was great, if anybody ever visits.

Parking in Vancouver was generally a bit of a chore. Actually to the city planners credit, it was pretty impressive that when downtown we almost always ended up easily finding parking, but never at a place that wasn’t pay by the minute. This was something else that stuck out to me.

I visited the Maritime Museum, which I really enjoyed. One thing I’d like to do more on the trip is visit museums, but that can be a bit difficult with a dog (it’s HOT outside, so we can’t just leave Sai in the car unless we happen to find covered parking), but I was very happy to visit this museum. The Roch, which is a famous ship, was there, as well as a much of displays about various ships/tugs/etc that came out of Canada.

We camped at an RV park in Vancouver, the first of many to come. This is a bit sad, that we are camping at so many RV parks, but oh well! At least we were close to the city.