Today, I woke up and decided to run the Barcelona marathon.

I don’t say that to brag, but it did feel quite a bit like that, if I were to be honest. Last night at around 7pm, Kev and I saw a sign advertising the race. I was a bit bummed, as had I known, I might have trained (I’d like to think so anyway :)) or done something to prepare for it, but I didn’t, and it was starting in about 12 hours from the time I saw the sign.

I woke up this morning and thought, “what the hell. I’ll just go enjoy the crowds and run as far as I want, and then stop” assuming it was going to be a 12-15km kinda run, as the MOST I have run on this trip was 9km. So we got up, walked to the subway, gave my biggest supporter a kiss, and I squeezed my way through the crowds to the starting gates. I didn’t register (obviously, it was closed) and so I was quite self-conscious the entire time about getting booted off the course. Thankfully, there were close to 20,000 people there, so I was able to remain pretty inconspicuous.

As we were running, I settled myself behind the 4’30 min mile markers and kept a slow but steady pace. I had no idea how far I was going to run, and just wanted to keep a normalized pace for as long as I could.

I couldn’t help but feel floored as to what a BEAUTIFUL city Barcelona is. After minutes of arriving at the bus terminal, Kev and I felt that this city had an unbelievable energy and life to it, and we loved it immediately. Running by Gaudi’s cathedrals, seeing the futbol stadiums, the unbelievable coastline and enjoying the sun – truly the city could not have looked more perfect if it tried.

Every 5km there were “refueling” stands supplied with oranges, nuts and water for our disposal. There were bands (most playing old school American tunes, which was awesome) seriously at every turn, dancers, Spanish guitarists, and unbelievable crowds the ENTIRE way. I have never seen anything like it. It was amazing, and truly such a testament to the people of Barcelona.

Around kilometer 20, I started to get CRAZY sore. My knees felt like they were going to fall off, my hips were tight, and my (stupid) Merrel “minimalist” shoes (which are NOT the shoes you want for distance, pavement running) where making the tops of my feet ache. I decided, okay, 21km = half marathon, that’ll be it.

Well, I got to km 21 and thought, “well, I’m already this far…now I’m literally stepping closer to the finish line with every step…” so I kept going. I have to say that at this point my time was 1:54. Despite the cheering crowds, honestly from km 25-35, I was really in a ridiculously rough state. It was here, that I must mention a few things….when I ran my first marathon in Bangkok (under similar circumstances) my mind was CRYSTAL clear. My body (knees) was aching like crazy, but my mind was in this “you are accomplishing a life-long goal. Keep going. This is nothing…” state for almost the entire race. I was never so confident in the power of the mind, and how our body really will do anything if we tell ourselves we can. That was NOT the case today (at least not during this 10km stretch). Minute after minute, I contemplated stepping off the course, and simply walking back to where I was going to meet Kev – but for some reason, I didn’t. I felt grumpy, sore, and honestly kinda sad.

probably contemplating walking next to this guy at this time

Around mile 21 though, my world started to change. First of all, one of the corner bands started playing “Proud Mary.” Instantly, I flew back to my time with my nearest and dearest friends, David, Maj, Jenn, Olga (and a couple other coworkers) who busted out some serious moves to this song for our talent show last year. My spirits began to rise as I smiled and laughed, and sang it word for word until I couldn’t hear any more.

Seconds later, I turned my playlist back on, only to find “Aint no Mountain High Enough” blaring from the speakers. This song always reminds me of my mom and brothers, as I have countless memories of singing at the top of our lungs in the living room, BLARING it from the speakers, Kyle running around looking for homemade microphones of candle sticks, forks, stirring spoons or whatever other object might be laying around for us to use. Again, I started laughing and my spirits lifted.

Next, “Aint too Proud to Beg” and right after “Dancing in the Moonlight,” Sean and my favorite songs. I have perfectly clear memories of picking him up when he was in middle school (and I was a big bad senior in my rinky-dink Ford Ranger truck (complete with red pleather seats, mind you) honking to the beat of the ENTIRE song in the line of parents picking up their kids, trying to embarrass him (which never worked, and he only would roll the windows down and sing as loud as he could as we drove away).

Next up? “Wannabe.” and BOOM. I was back at our Senior Night with my besties, Court, Les and Laura, dressed in ridiculous getups in front of a green screen, doing everything in our power to lighten a difficult time in one of friend’s lives by singing and being silly.

Next? Missy Elliott’s “Work it”. and BOOM! Again, instantly transported back to 14, with another one of my best friends at the time, rollerblading to boys’houses we had crushes on, and getting ice cream from our local ice cream parlor.

At this point, I was still in a LOT of pain, and while my spirits were MUCH brighter, I was still in a bit of a fog. Next on the song list, “Rather Be.” I just found out about this song, but could not get over how perfect the lyrics were for this time in my life,

“We’re a thousand miles from comforts. We have traveled land to sea, as long as we’re together, there’s no place I’d rather be.”

All of a sudden though, among the THRONGS of people, there was Kev. Just sitting there, cheering all of the runners on. And, I started crying. With a HUGE smile on his face, he jumped up and started running alongside me, lifting my spirits with every step. My biggest supporter and #1 fan. I could do this.

For the last 2 km, as I quite literally hobbled to the finish line, I was bombarded with memories of my Dad signing us up for the Bobby Crim when I was just 7 years old, and all of us running together as we crossed the finish line, or the countless XC races he cheered me through in the freezing rain, as he told me to “push the hill!”. I was reminded that the hat that I was currently wearing was one my mom gave me after she and her best friends (Jan and Kathie) completed the RIDICULOUS feat of walking a marathon one day and a half marathon the second day, for Breast Cancer, and how unbelievably proud I was of them. I remembered running through the streets of San Francisco, with one of my dearest friends, Emily dressed to the nines in whatever ridiculous outfit we could think of for Bay to Breakers. I remembered my dad preparing for his marathon which he ran for my grandma and her battle with Lupus. I remembered getting a call from my best friend (the non-runner!) after she finished her first half marathon in Colombia and how infinitely proud I was of her. It was minutes before I was about to cross that I truly reflected on all of the people who have helped me get here. Running this marathon, or not, these people and countless more helped me learn how to make small goals to accomplish even bigger ones. These people have given me the confidence to even CONTEMPLATE such a feat – and I realized and appreciated just.how.thankful. I truly was to them.

It was about here, 100 feet from the finish line, that I got yanked off the course for not having my bib (despite trying to tell the guy that it was “con mi esposo!” He didn’t buy it, but that was fine. Looking up at my time 4:20:25, I realized I had surpassed my initial goal of the 4:30 group and felt like gold. 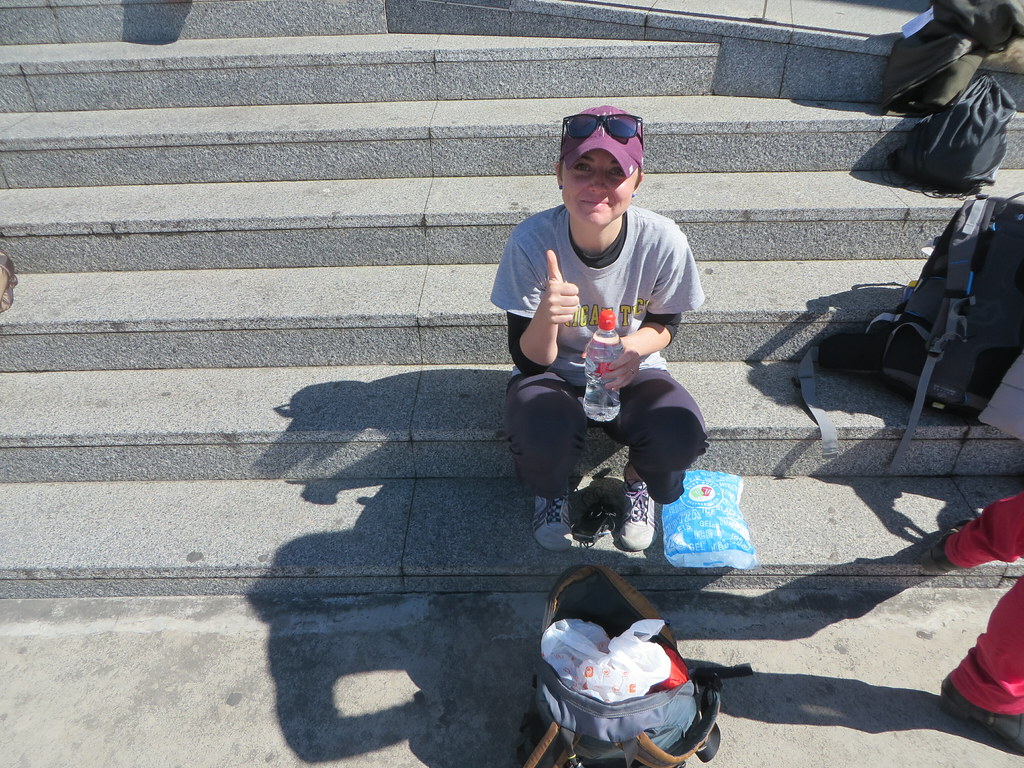 Minutes later, Kev caught up to me, armed with bags of ice, anti-inflammatory cream and H20. Again, my biggest supporter. As we sat on the steps talking about the run, I couldn’t help but to feel like “Damn, that was something, but this was nothing….” totally clear-headed, and feeling remarkably loved. 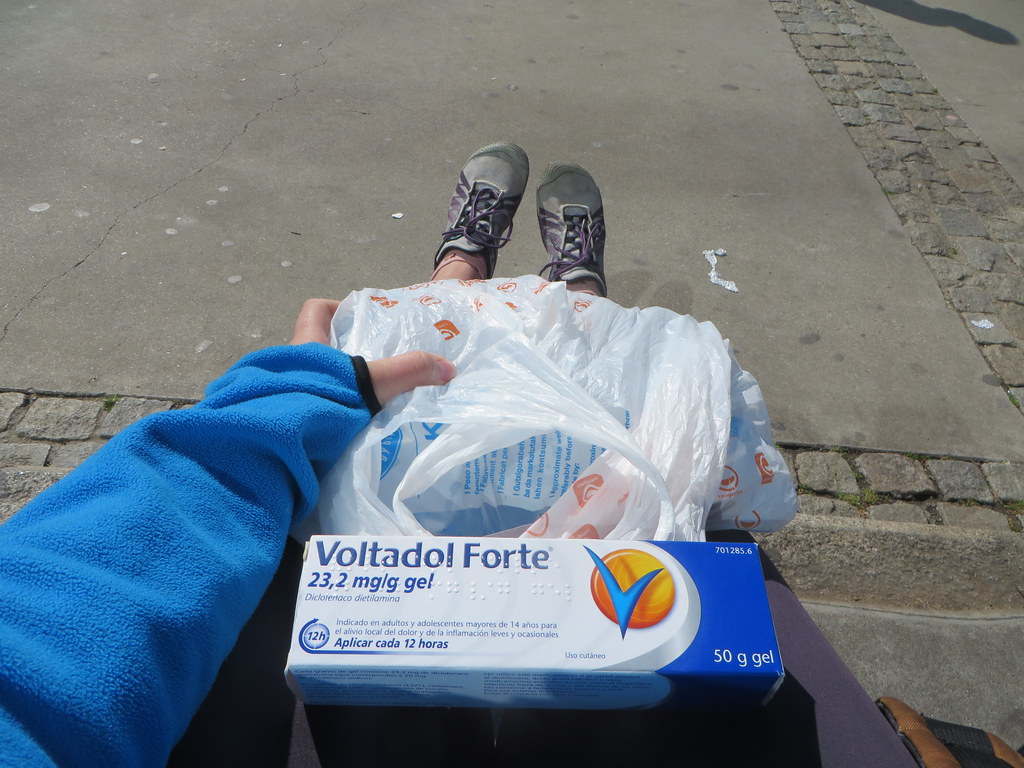 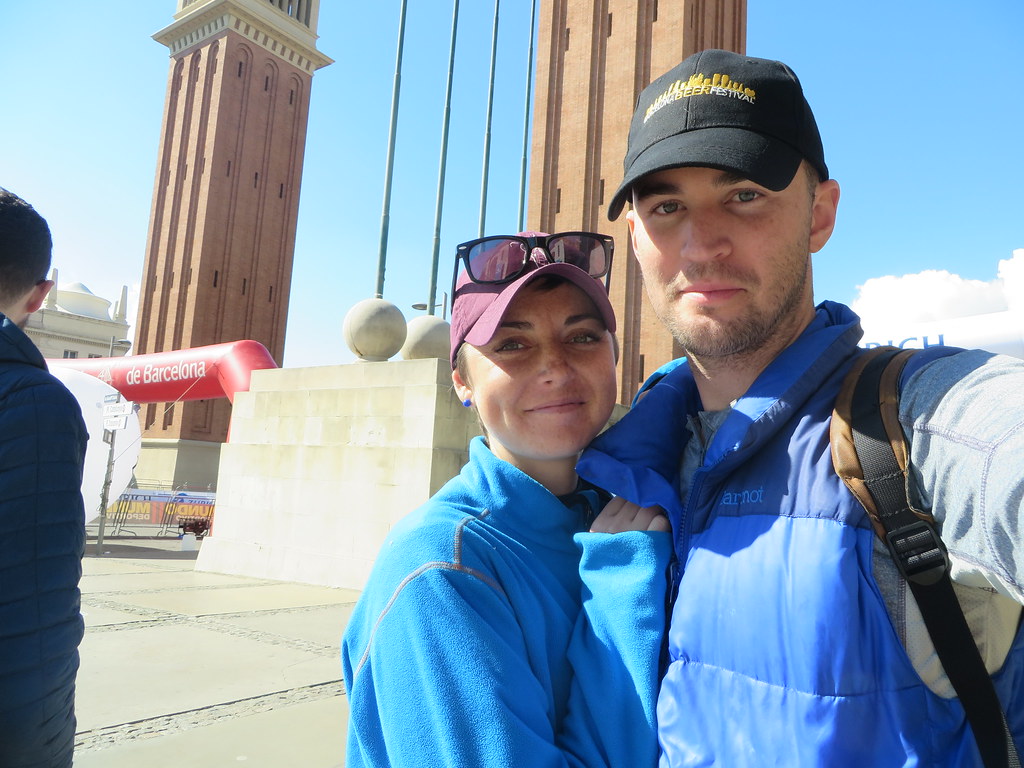 Lindsay- I love ya girl. You brought me to tears with a huge smile on my face as I read this blog. Your spirit of life is incredible. Keep doing what you are doing- these memories are invaluable treasures. So proud of you!!!

THAT, was probably the best thing I’ve ever read. SO very proud of you.
xoxo

Lindz,
The way you found strength through mantras, songs, memories, and the sight of your love is truly remarkable. You ran a MARATHON…in Barcelona! Thank you so much for sharing your reflections on such a monumental venture <3

That oriental foot you ate the night before must have been amazing. Please have some in Portugal when we see each other in 2 weeks and bring some home for our races starting in May. I am Not surprised you ran the race or frankly any thing you do. You have a wonderful way of taking seemingly simple steps at a time and turning them into cherished experiences, not only for yourselves but for the rest of us. I am glad you had Kev there and always. I love you.

Yahoo!! I LOVE it!! What a BLAST! I am celebrating, cheering and yelling, while I was reading this…thank the Lord for Rock and Roll : )
Can’t wait to see you and hear more of your fabulously amazing adventures, love to you both xox!

You my friend, are such an inspiration! You always amaze me with these crazy long runs…as running is one thing I cannot seem to get into. Maybe someday.;) I’m so very proud you woman! So glad some of our great memories helped get you to the finish line. Love you!!xoxo

[…] if you haven’t read yet, Lindsay decided to run a marathon. I won’t bother telling the story again, other than to say I was and am quite impressed with […]

Lindsey,
Wow, so proud of you and so happy for you! It made my day. Uncle J