First, as a few of you know, Lindsay and I are leaving the Bay (at least for a while) and moving to India. “Moving” is admittedly a slightly strong word, as we have no intention of staying permanently, but we are going for a year. Or up to a year. At this point we have very few details as far as what we’re doing in India, but we know this: July 1st, we’ll get in the car and drive from Oakland, CA to Vancouver, CAN (Canada!). From there, we’ll drive across Canada over the period of a month, until we get to Quebec City, Quebec. From there, we’ll go back down through Canada to the US, where we’ll end up in Grand Rapids, MI. We’ll spend the rest of August in Michigan with our families (and I’ll be trying to work as much as I can, if possible). Then, September the 3rd we’ll fly from Chicago to Mumbai! And that’s about the start of the India trip. I’ll post a lot more soon about more details that we do have (our rough Canada camping plan, etc) soon.

But for now, the start of the India trip…

Today was a bit hellish. Not really, all in all, I had oatmeal which I really like, and I got a new battery for my Nintendo DS (thanks Nick). I’m trying to catch them all in Pokemon Black at the moment.

But let’s go back in time, to a simpler time..

The time is last week. I had just gotten done spending days researching Indian visas and navigating the very terrible visa websites. See, the thing is, India outsources the visa application processing to a company. As of today, that company is BLS. As of next week (and this is critical!), it’s a different company. Apparently BLS had many complaints against it, so India cancelled their contract and moved to a different company.

Here is our application (well, part of it), which was one of five or six documents we needed to have ready. 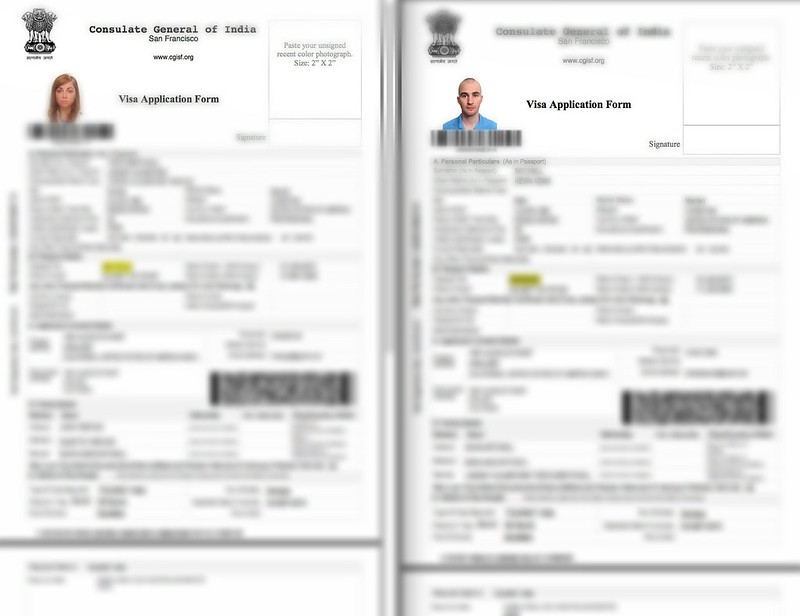 Because of this switch to a new company there was/is uncertainty in how BLS (the current company) would handle this trade off, what would happen if you were midway through the visa process when this transition happened, etc. I thought long and hard about this, but decided that I would rather just take care of everything asap. By “everything” I mean “getting our visa.” We are applying for 5 year multiple-entry visas, which means (long story short) that getting the visa early is not a problem. A 6 month tourist visa is good for 6 months from the date that the visa is issue, and technically the 5-year visa is “used” starting the day it’s issued, but we obviously won’t be in India for 5 years!

Anyway, the BLS website is incredibly confusing, but after spending some time reading and re-reading all of the various instructions on the website I got together what I believed to be all of the paperwork for our visa. I made an appointment (also confusing) and went to the BLS office in downtown San Francisco on Geary. I waited in line for a while, but ended up having no problems.

Until a few days later, when I got an email telling me that I needed to submit an additional document for processing. Basically, the visa application (a from supplied by the Indian government) had a field in which to put the address of your “sponsor” in India. I didn’t realize (and ultimately this is my fault) that the form automatically truncated the address I copy/pasted, and “Mumbai, India” was cut off. So, I had to resubmit the application.

This involved filling out a new application, which wasn’t so bad. Then printing everything out. Also not so bad. Well, as I mentioned it was a bit stressful know that the company I had given 300 bucks to and had my passport was going out of business completely in a few days time, and the website now looked like this: Anyway, I filled out the form, and immediately the next day went into BLS, making sure to get there at 8:30AM. This was on a Wednesday. Well, I get to the front door and what do I see, but this sign: Of course there was no notice that BLS would be closed on Wednesday on the website, and what’s more, this was one of the last THREE days the office was open, period. Before the limbo/uncertainty while switching visa processing over to the new company. I was very sad at this point, as I had really tried to do everything “right”, but kept having random problems. Also, though I’m tired and it’s a bit difficult to explain the feeling here, a number of the employees working at BLS actually came up to the door while myself and another person were outside talking about how bummed we were that it BLS was closed. The employees were, from what I can tell, trying to get into the office for one reason or another, but the door was locked. So they were pounding on the door trying to get somebody to let them in, but it didn’t seem like anybody was in the office. It was just a strange feeling, being locked outside of the office with the people who worked in the office, on the side of a busy street in San Francisco.

I tried to get more info about what would happen, when we should come back, if I would have enough time to get my visa processed before switching over to the new company on Friday, etc. They (understandably) told us (as they were calling people and banging on the door) that they weren’t sure what would happen, that they themselves didn’t have jobs anymore at the end of the week, and that they couldn’t tell us anything. Not particularly reassuring. I asked if we’d at least be able to get our passports back, the person I was speaking to said “I don’t know,” which was awesome! They advised me to come back the next morning, early. The office doesn’t open until 9, but they said to get there by 8:30 for sure.

Luckily, being the nerd I am, I got to the office at 7:45 AM the next day (45 minutes before recommended!), Thursday. One day until BLS shut down. And I’m very happy I did, because already that early in the AM, this is what I saw: After waiting an hour and fifteen minutes for the office to open, I took care of things relatively quickly. Despite the less then ideal experience I had with the BLS and the general Indian visa system, the people at BLS were very friendly and were as helpful as I honestly think they could be. I gave my documentation to a very nice lady, who told me that I would more then likely be OK. She said that if the Indian consulate didn’t finish processing my visa by the time BLS closed for good, then the new company (Cox and Kings I think is the name) would more then likely get my passport and send me an email to pick it up.

Luckily, that never happened. Friday, the next day, around 1pm, Lindsay and I both got emails telling us that our visas were processed and ready for pickup. Marc, being the nice guy he is, let me leave work early (around 5) and I headed to BLS as fast as possible. The office was packed, and seem on the brink of chaos. This was, literally, the last 30 minutes of BLS before it closed for good. I’m very, very thankful, that I was able to get our passports back, barely.

You can see they had already posted the sign up saying that the office was closed. And here are some of the people waiting. edit: turns out I think we made the right choice to go with BLS. Looks like the new company is currently having a rough time! http://www.sfexaminer.com/sanfrancisco/outsourced-indian-visa-company-angers-crowd/Content?oid=2806904

edit again: And a video showing the continued chaos: http://www.nbcbayarea.com/news/local/New-Indian-Consulate-Service-Sparks-Frustration-Over-Delayed-Visas-261037461.html

3 replies on “We’re going to India: Part One – India Visa Hell with BLS in San Francisco”

India! Awesome. Hope we can catch a beer if we’re both in Michigan at the same time this summer.

Kevin! I am very very pleased and excited about a) this blog b) this trip c) that you did EVENTUALLY work the visa thing out. <3

Wonderful post. Glad you pulled it off with a lot of determination and some luck, hurrah.!