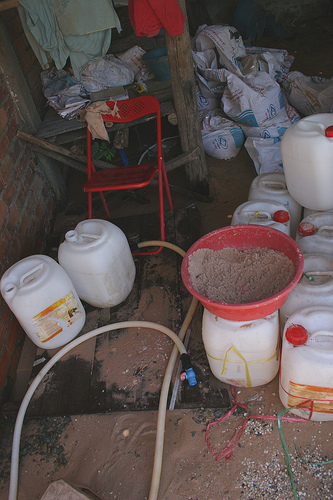 well, is everything we hoped it would be and more. as i’m sure my previous posts made clear, the first few weeks were somewhat trying, but since we’ve been in Siem Reap, things have been nothing short of awesome. kev and i both just finished up our first week of volunteering, which we both found to be extremely fulfilling (for lack of a better, less cheesy word). kev worked at a place called TrailBlazers, which builds really simple water filters for people in remote villages allowing them to have access to clean water. just to give you an idea…inside of a 2ft high, rectangular cement box, was the filtration media, which consists of a layer of gravel, a layer of course sand, and a layer of fine sand. there is a plastic diffuser plate above the water level to avoid disturbing a “bio-layer,” which holds key bacteria essential for removing biological pathogens and parasites found in the water. he woke up early every day and went and scrubbed out giant plastic containers, sifted sand and rock, and then washed the sand for the filters. it was quite a “grassroots” organization, but the work they were doing was quite incredible. with the most meager of supplies they were able to send these $45 filters off to villages for free, thanks to volunteers and a little hard (if not monotonous) work. in the mornings (from about 9-12), while kev was at work, i hung around, went running and explored the city via bike. when he’d get home, we’d normally head to Lucky Supermarket, a new and very exciting edition to Siem Reap (it’s the only supermarket in the city, and opened our 2nd day here), to buy some of the cheapest lunch meat, bread and, on a day we felt like splurging, cheese, they had for lunch. by the time we cycled back to the guest house, and ate, i had to get ready to go to work myself!
i worked at a “school” teaching english to about 30 kids aged 5-17. i say “school” because the school really was nothing more than a roof, about 6 rows of homemade wooden tables, and a white board. a few weeks ago, the students were meeting at one of the temples near by, but the government has been cracking down, and forcing the schools to relocate in order to keep the temples available for tourists to visit. because of this, many schools have been forced to shut down, leaving many kids no where to study. thankfully for the students at this school, a nurse offered to “donate” the lower half of her house for the school to run. so, we met there. their teacher was a 19 year old cambodian student, who was quite possibly the sweetest, most dedicated teacher alive. she was given a small stipend by a local NGO to provide pencils, paper and food for the students, but short of that, she worked for free. many of her students are orphans, and until a few weeks ago, were living on the streets. since the house has been donated, many of the students now live at the school, all sleeping on the cement floor together under scraps of ratty clothes and burlap bags. their teacher lives with them, and along with her other responsibilities, now acts as their guardian — cooking, cleaning and caring for these 9 students. the school is open to the poorest of the poor children from the siem reap area. all can attend for free, and 95% of their families are making under $1 a day.
i cant even begin to describe how amazing these students were, and the kind of energy they filled me with each and every day. i have posted some pictures below so you can see their faces. from the pictures alone–never hearing their voices, or knowing their personalities–you will fall in love. it’s impossible not to. even though the kids were definitely spread out in age, they all played together during their game time, and seemed to genuinely care for each other. the older ones would sit by the younger kids and help them copy the words off the board to their notebooks, and help pronounce words they didn’t understand. if one student brought in a small bag of fruit for a snack, they would share with the entire group, even if it meant the kid who brought the food only got a small bite. it was truly incredible to see the way they understood the world. inspiring. for more pictures go to: www.flickr.com/shoelessone
anyway, we’re off to go rustle up some grub.
it looks like i have a few more seconds…very quickly while kev’s uploading some photos, here are just a few things that have happened or i have realized this week….
· while running a few nights ago, i was jamming to christina augliara’s “aint no other man but you” and stepped in i swear to god, the smallest pothole i have seen in . go figure. figuring i could brace my fall in the split second before actually hitting the ground, i put my hand down, and managed to not only scrape my knees, elbows and chin, but also sprain my finger. as i’m sure many of you know, gracefulness was not a trait i inherited at birth. as you can imagine, my fall was definitely not elegant, attractive nor fluid. if the pain of the fall wasn’t enough, there happened to be a group of people riding down the street on their mopeds who were just close enough to see me wipe out. great. bloody knees, purple finger, and pride sore from embarrassment. not bad for a night’s run. · i realized yesterday that i have not washed my only pair of pants since i have been here. they’re the zip off ones, so i feel like i’m wearing 2 different pairs on any given day. (yes, i know that’s not the case.) i washed them immediately after i came to this realization. dark brown cannot do the color of the water justice.
· speaking of my innately klutzy behavior, i must relay this, yet again, extremely embarrassing story. earlier this week, i met with a guy (who happened to be a monk) to learn some Khmer. it was a really funny, albeit awkward experience, but i walked away feeling like i learned a lot, and was really excited to start trying out some new words. needless to say, it’s very difficult to pronounce half the words with the letters used, let alone get the inflections right. sometimes they’re practically inaudible – at least to my untrained ear. but i tried my best (for instance, try pronouncing the word chngng anh. that is how the monk spelled “delicious” for me. like those lack of vowels? yeah, it drives me crazy too). anyway, my very first day at school (really, within the first minute or so), in an attempt impress her with some Khmer, i said, “hi there, how are you doing today?” instead however, i managed to ask if she had sex with her brother in front of the entire class. immediate uproar. completely unaware of what i had just asked, i sit there smiling, waiting for her response. while she’s getting noticeably uncomfortable, and trying to quiet her class down, she turns to me and says, “i think you should retry your question.”
looks like you can be klutzy without actually falling.
here’s hoping i’m not the only klutz out there,
xxx
lgt

One Reply to “imma klutz (and other stories).”