We took a total of three buses to get from Venice to our AirBnB apartment in Florence. The first two were pretty easy (other then having to sit and wait at the bus station in Venice for 4 hours as I mentioned in my previous post). The biggest pain was that the second bus dropped us off at what felt like the side of a major road, in the dark, where there were no street lights or sidewalks, etc.

I had expected this to some extent because like always I have checked out the full route we had to take before leaving Venice, and I knew that our last bus picked up on the side of a highway where there was no clear, obvious bus stop. I even saw the “stop” on google maps. But, it’s a bit different when you’re tired, and it’s pitch dark and you know that the bus is only coming once an hour (or so you hope!) and if you miss it you’re going to be sitting in the road for who knows how long in the cold, with a slight drizzle.

I took a quick video of this situation, though honestly it doesn’t do the situation justice because what you can’t clearly see is that there was literally no place to stand on the side of the road because the road is set down in a little “valley” of sorts. So you’re basically standing on the road. Lindsay had the bright idea of turning on her flashlight, so the oncoming traffic could see that we were standing there, which really did (thankfully) slow traffic considerably.

Luckily we didn’t have to wait long for a bus to come so in the end it wasn’t so bad. It certainly could have been a lot worse (although Lindsay doesn’t look too thrilled there :)).

We finally got to the city (Florence) and had 1.5 kilometer walk to our apartment. On the way we passed a couple of people handing out flyers to a free choir concert happening at a big/old/beautiful cathedral, and we ended up running to our place, and dropping off our bags and then RUNNING back to the cathedral to watch the concert. It was pretty cool I’d say, especially for free. All of these amazing old cathedrals are pretty awe-inspiring on their own, but when you add a choir on top of the building itself it’s even better.

After the first night we had a number of things that we wanted to make sure that we did, primarily involving food (surprise, surprise). Sometime in Venice (or perhaps before) we decided that when we were in Italy, we really wanted to feel like we could eat a variety of different foods without feeling guilty about cost, etc. Of course we always try a ton of food (and talk about it plenty I’m sure), but with Italy we wanted to spend a bit extra if we needed to, and throw caution to the wind sometimes and make ourselves go out to eat (instead of finding one cheap thing and eating it for every meal).

Actually, speaking of the first night, after this concert (it was maybe 10:30 or 11? Late by our standards) we went out for dinner. I had ribollita, which is a traditional/classic Florence/Tuscany soup made with bread (a thickener?) and a bunch of vegetables, apparently twice baked. Lindsay had some sort of pasta dish with mushrooms and truffles. We also each had a glass of wine, which was really fancy. The meal was spectacular.

I’ll take this opportunity to mention that so far, Italy has been a truly amazing place food wise. It’s too much work and I’m not really able to fairly compare countries, so I won’t do that, but I will say that every single thing we’ve done in terms of food in Italy has been awesome. For example, as I may or may not have mentioned in a previous post, nearly every morning we get a coffee and pastry, and they are always cheap and awesome. Pizza has been amazing (more on that in another post), pasta has been amazing, and prices in general have been spectacular considering what we’ve been eating. Much like Venice lived up to our expectations/vision, the food in Italy has done the same.

We only spent two days in Florence, and to be honest the two days were spent doing what we normally do – walking around the town, going into markets and grocery stores, walking into any (free) interesting things we see. Reading. And eating lots of gelato. 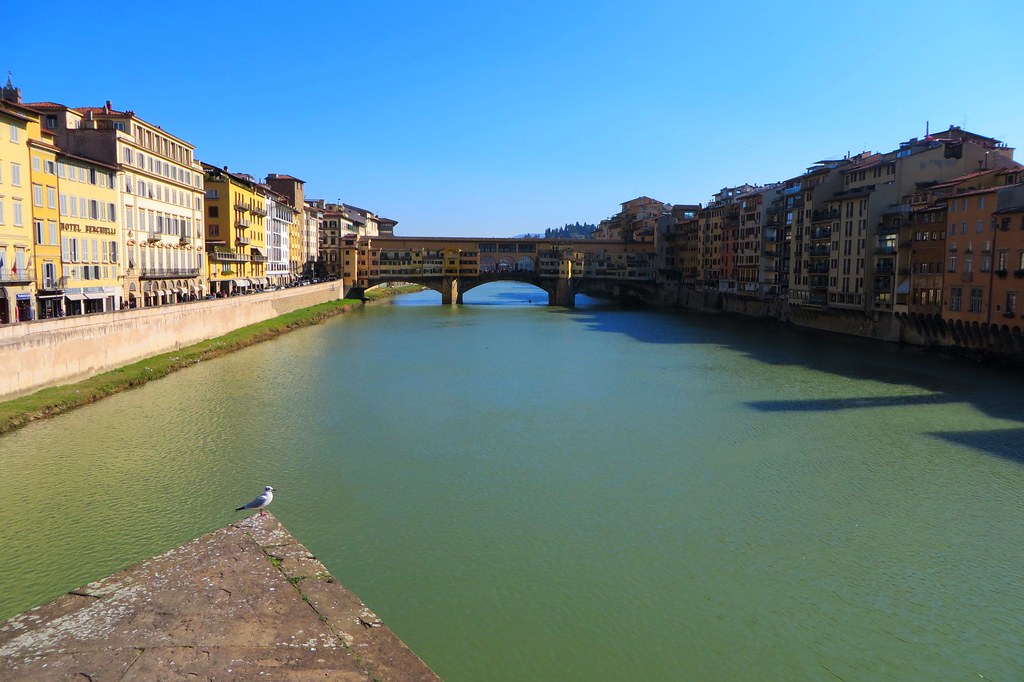 A few highlights include: 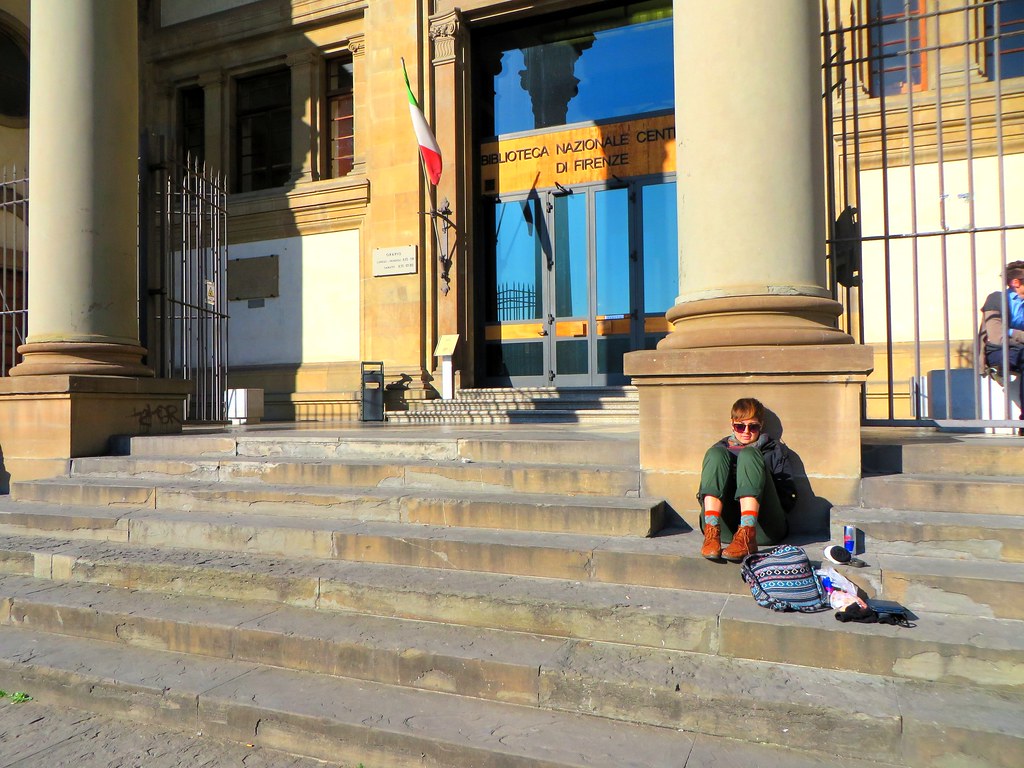 While we were there (randomly, as I expect in the US somewhere less old and historic feeling), a Red Bull car drove by and gave Lindsay and I each a Red Bull through the window. Lindsay didn’t want hers, but seeing as they were free, I grabbed two drank the Red Bull with excitement even though I don’t really like Red Bull. After drinking mine and part of Lindsay’s I felt sick and decided not to drink Red Bull again. 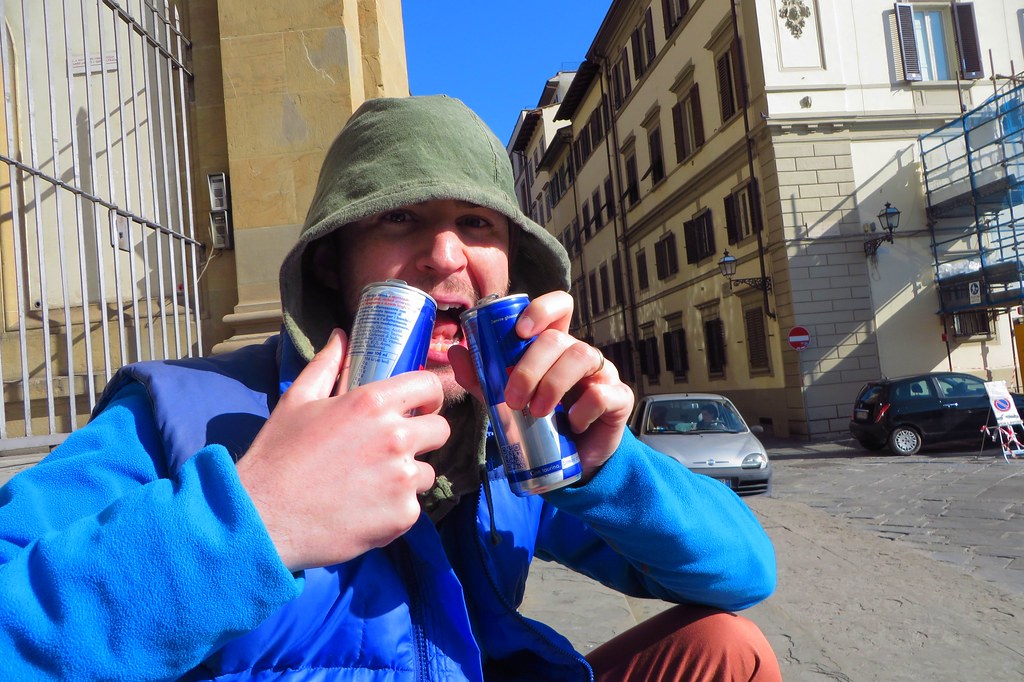 The markets in Florence were beautiful. We had some truly amazing pasta (in what I now believe was a bolognese sauce) at the central market (very sweet/old/historic) market.

Here is Lindsay reading our guide book while eating… 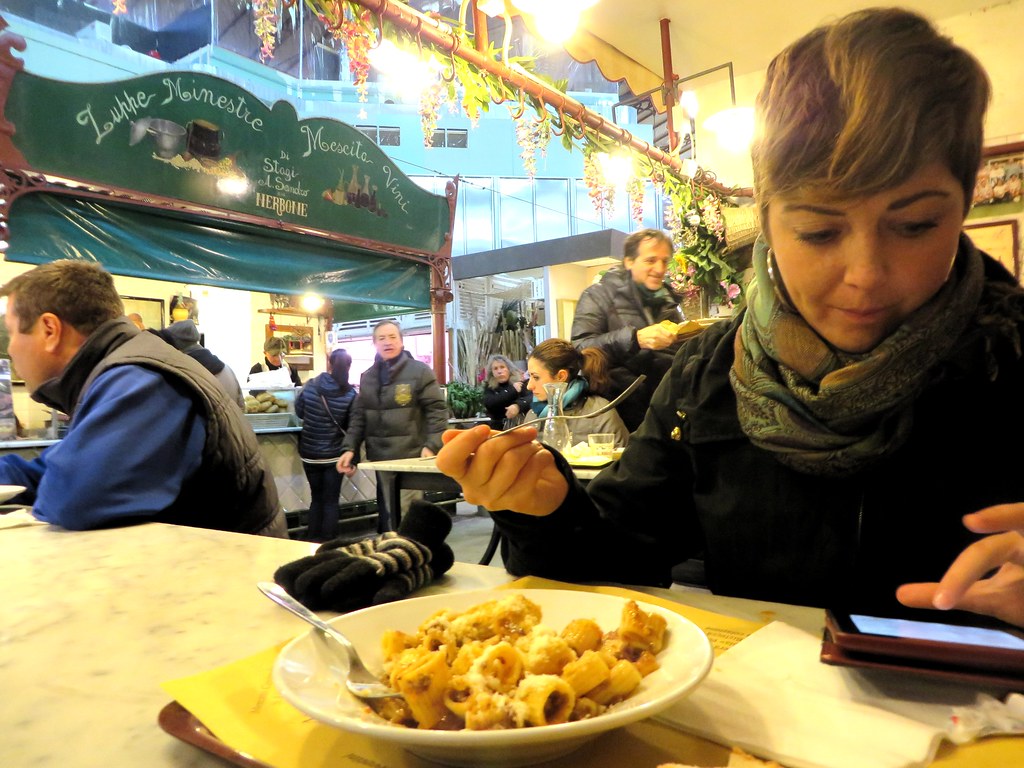 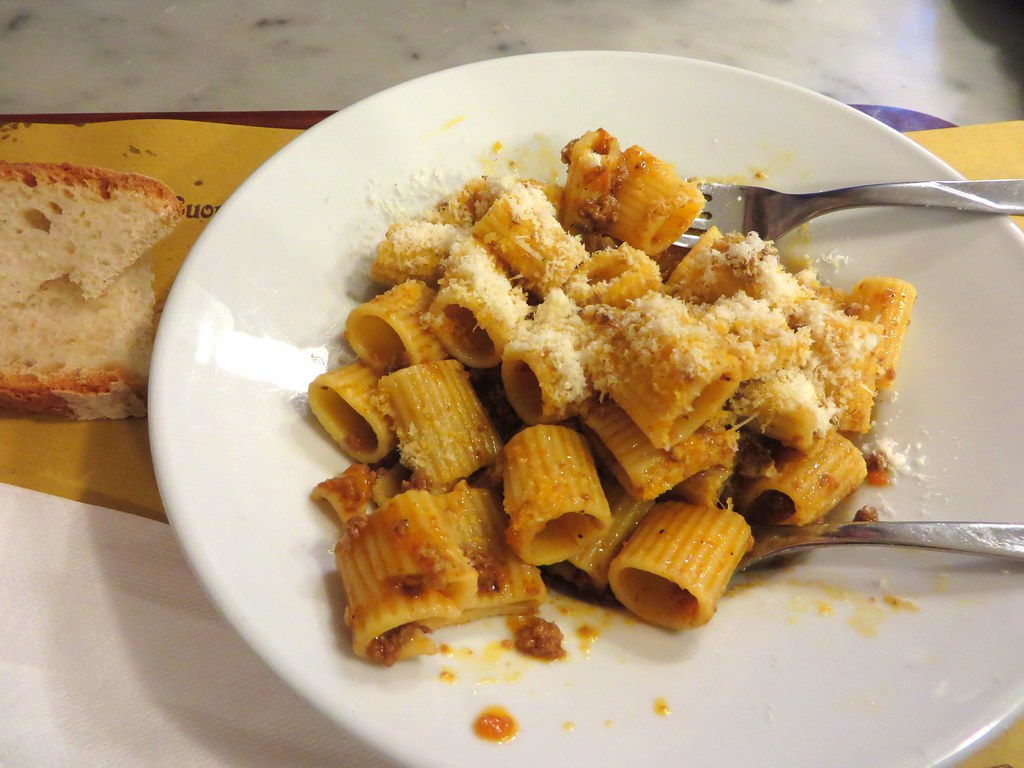 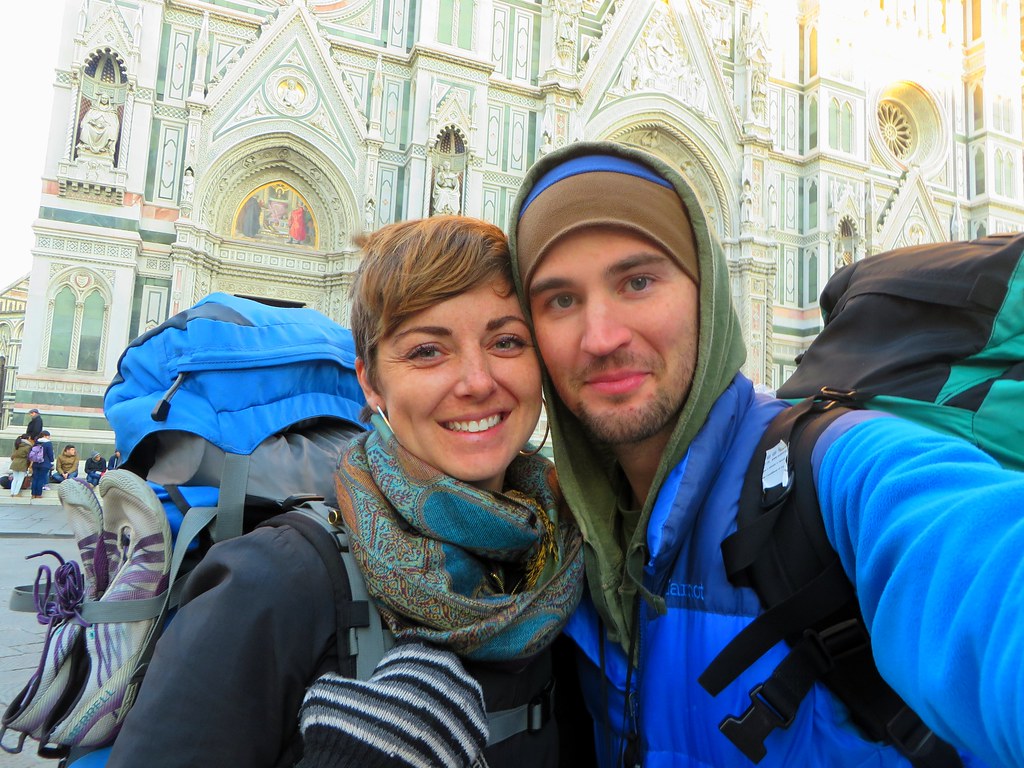 At our guesthouse, we had an enjoyable conversation with a few girls from China who were studying in France. No photos, but a good memory. One of them was quite interested to know (randomly, soon after talking for the first time) if we used the knife in the right hand while eating. Frankly, I should probably not have found this as funny as I did because on occasion I can ask some stupid/random questions when I’m in an uncomfortable situation, but the girls absolutely shocked and giddy reaction to our response (“I guess we eat with the knife in the right hand…?”) had Lindsay and I both bordering on being rude because we had a difficult time containing laughter.

So, two days of this walking around stuff and then we left Florence. We did very few of the “big” tourist attractions, which some may see as a crime, but we had a nice time just the same. We had a ride share down to Rome with Vito next. Here I am once again doing what we do best, wait for transportation. 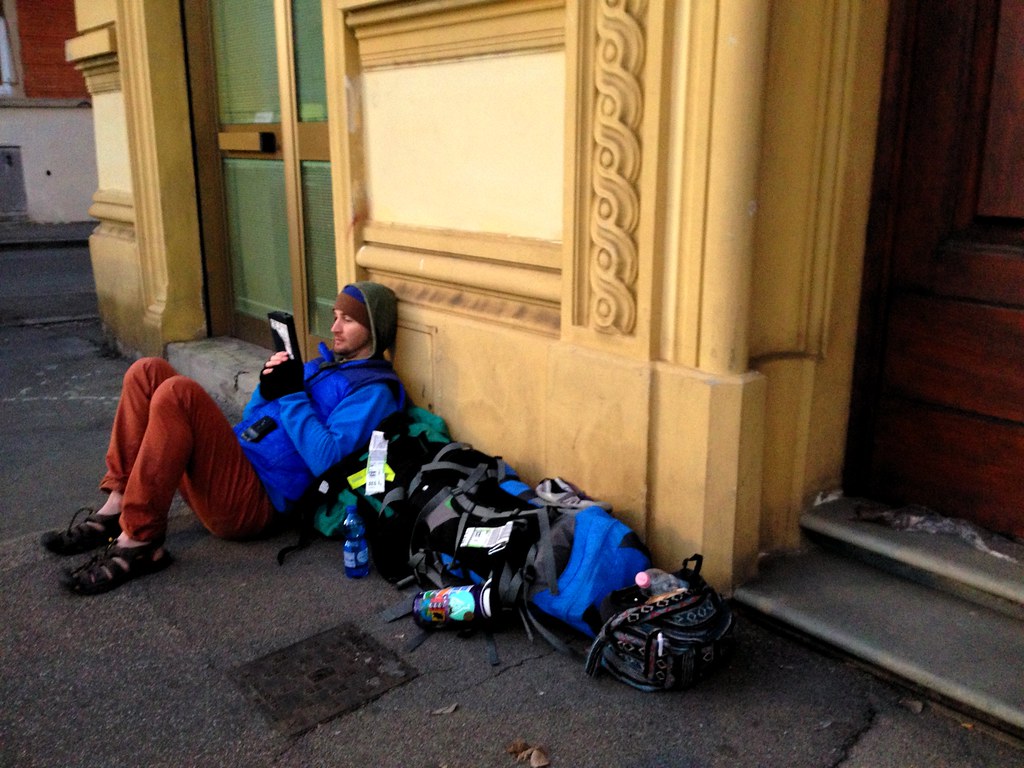 The drive to Rome was uneventful. Vito didn’t speak much English, and there was another girl in the car with us that was Italian so she sat up front, which meant that most of the 3ish hour car ride the people that were not Lindsay and I talked. I read (more Dresden File books) and Lindsay listened to podcasts (The Moth). The one thing I wanted to mention is that we stopped at this gas station/rest stop somewhere and it was AMAZING. Most importantly, they had TWELVE PACKS of Kinder eggs! 12 packs! It was crazy. They were 8.99 euros. 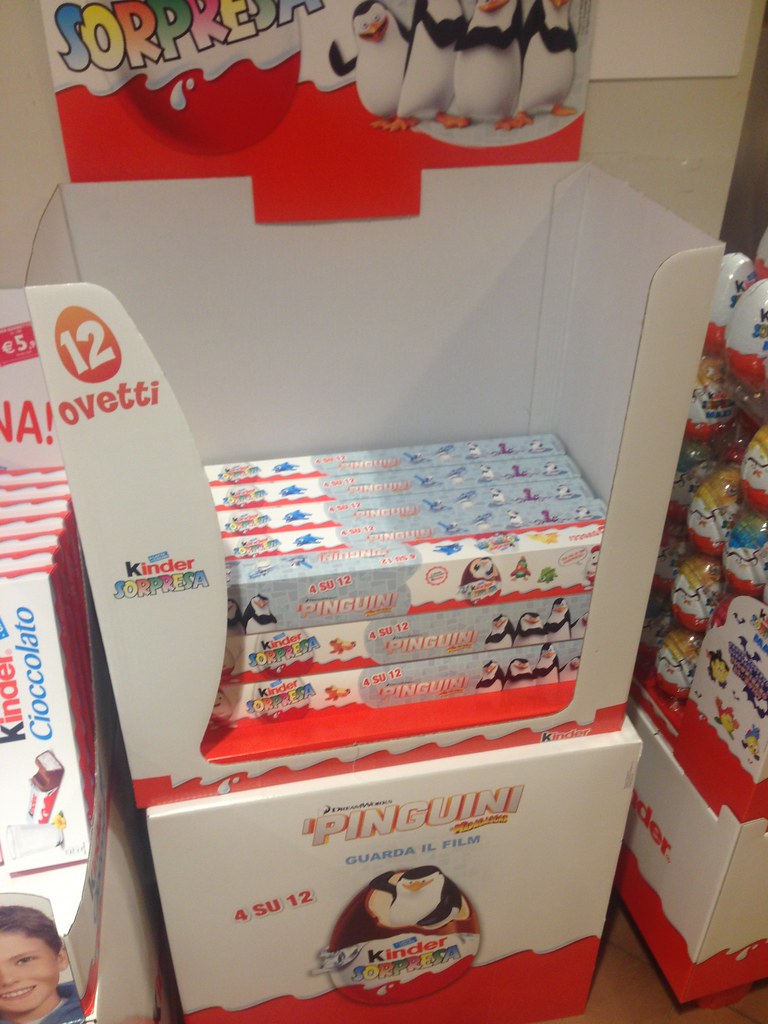