Our trip to the Amalfi Coast was honestly kind of a pain. From our hostel in Rome, walked to the metro, which we took to the outskirts of the city where we did another ride-share. We met at this rinky-dink little gas station (Q8) on the side of the road. From there, we drove about 2.5 hours to an airport, where we hoped bus to a city called Salerno. We were the only ones on the bus (guess we were the only ones stupid enough to head to the coast when rain was in the forecast!). After about a 45 minute ride to Salerno, we were again dropped off at the bus terminal where we grabbed yet another bus (after waiting in the pouring and FREEZING rain for 1.5 hours) to Minori. 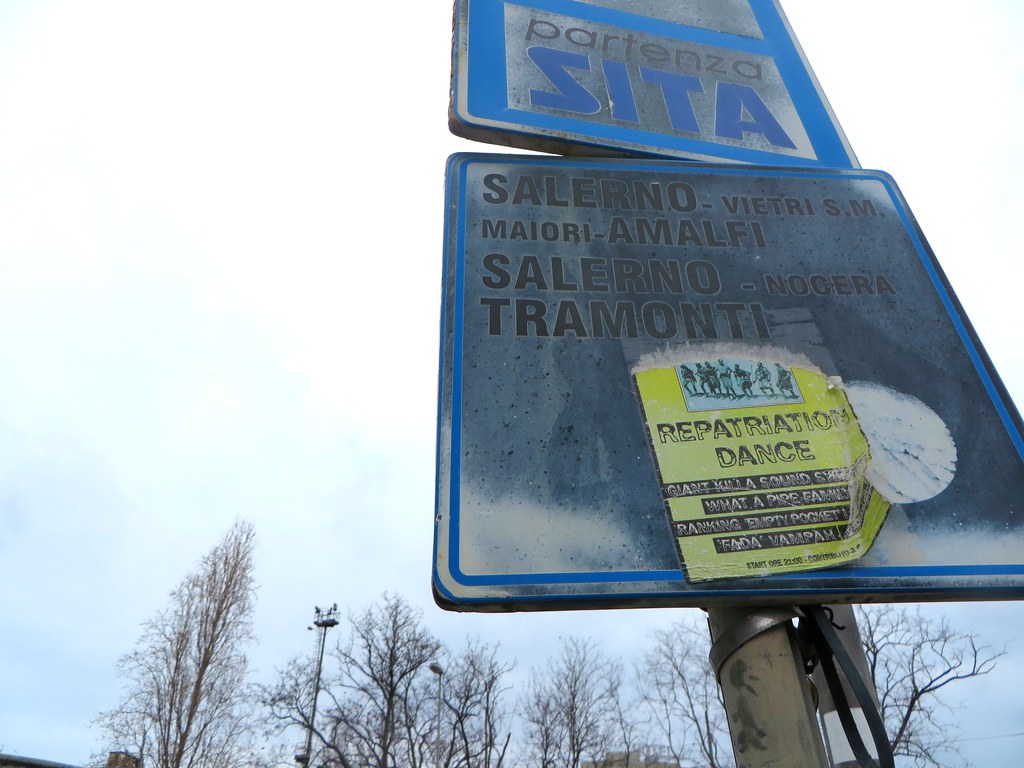 The bus ride the the Amalfi Coast was BEAUTIFUL, but never having great luck driving, I was crazy sick with the switchback turns. Another hour later, we arrived in beautiful Minori, where we were lucky enough to get to walk 950+ steps up the side of a mountain (no joke) with our packs. (Like I said, wasn’t the best day of travel we’d ever had, but certainly not the worst!). We arrived (somehow!) in great spirits (probably due to our insane view) and despite having un-perfect weather, were thrilled to be there.

So, our time in the Amalfi Coast looked a lot like this:

Although the weather wasn’t great while we were there, the views were nothing short of spectacular. 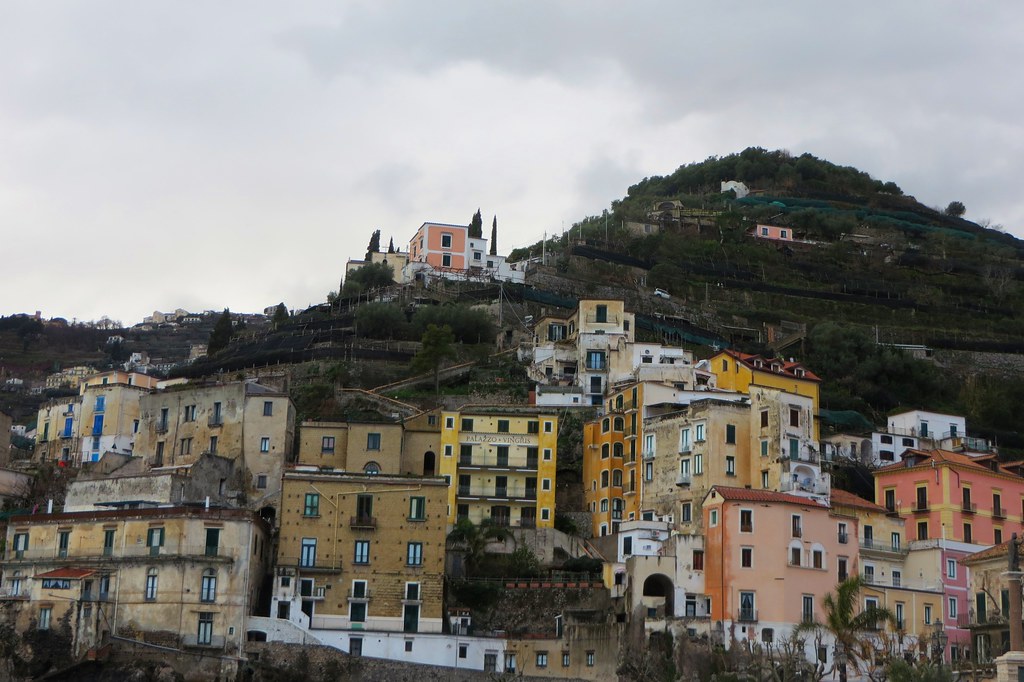 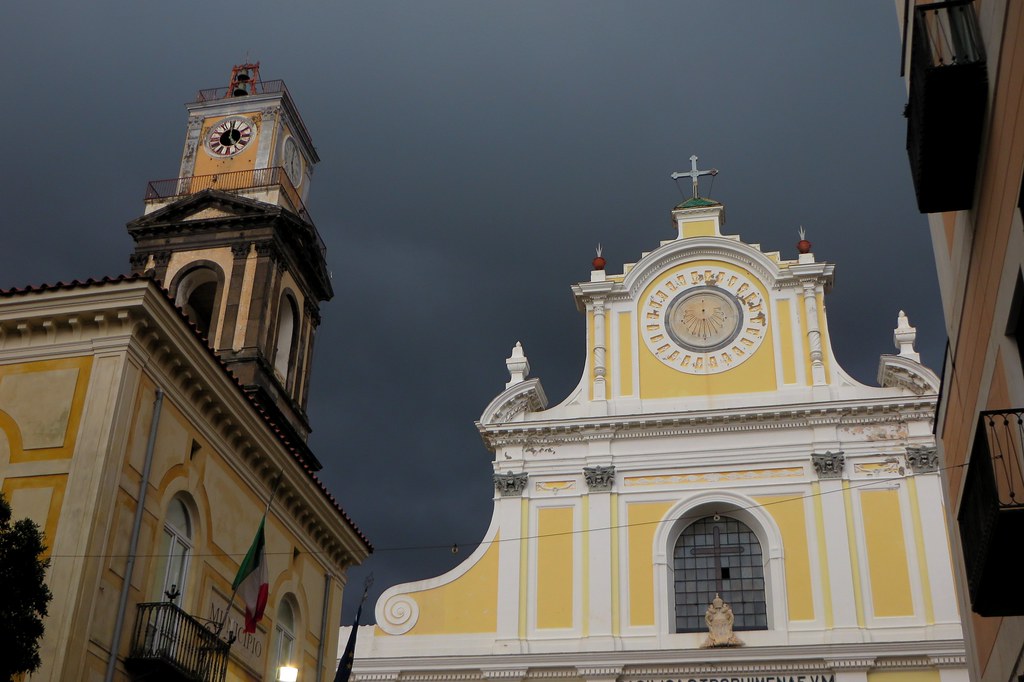 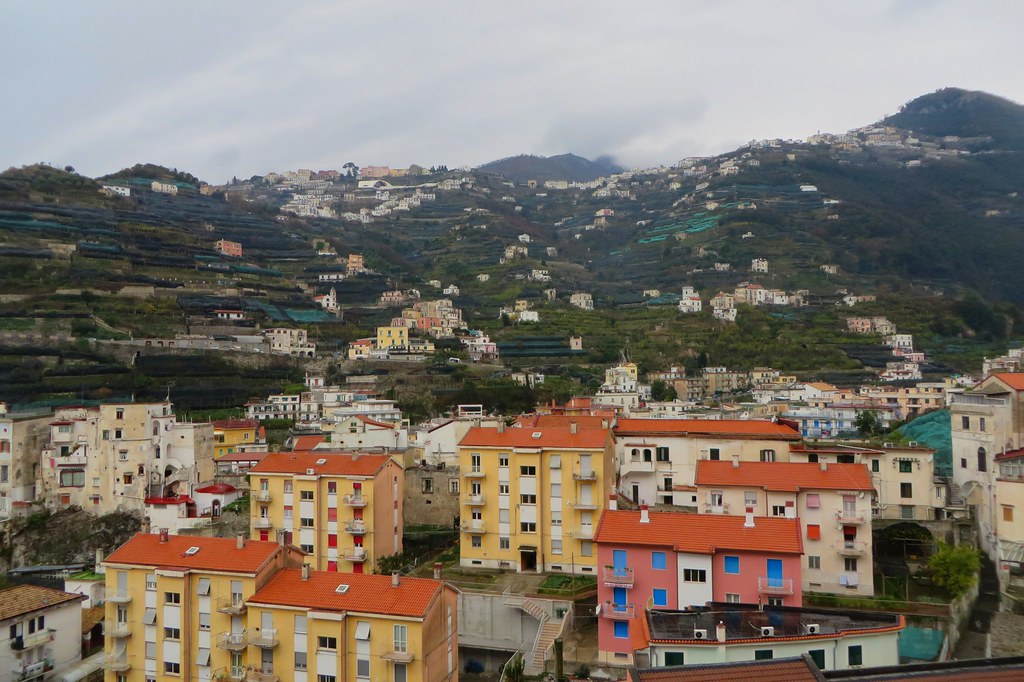 And the fog/mist rolling in over the hills was awesome. 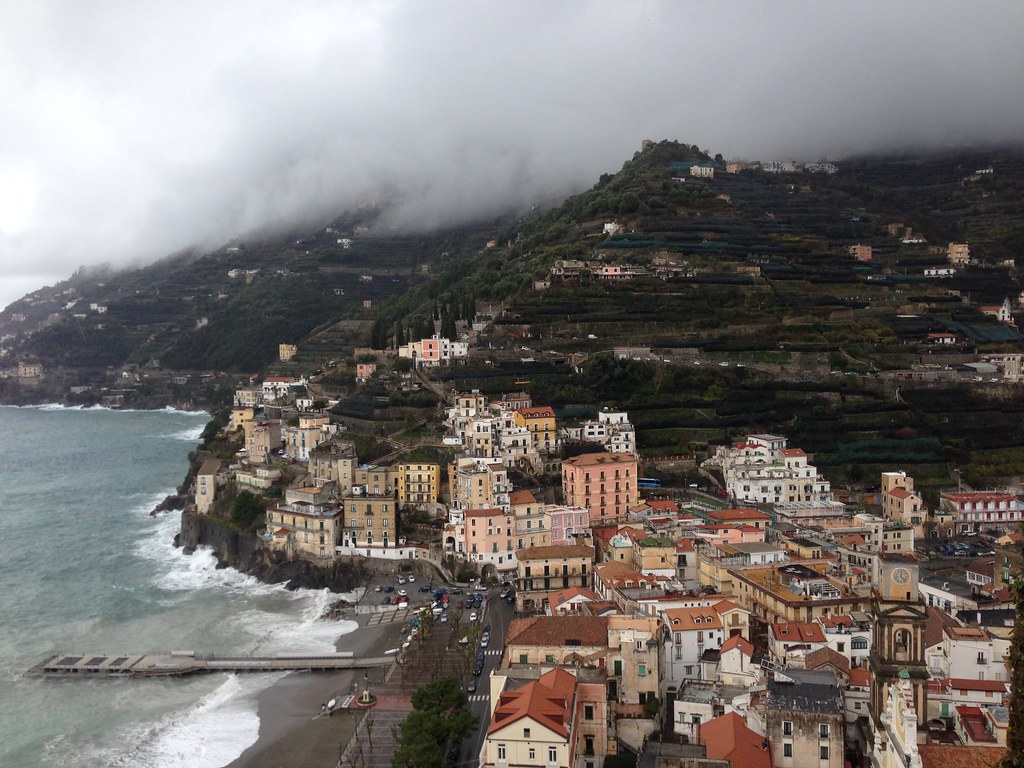 We could almost imagine what it would have been like to visit in the summer, or some warm months when swimming might have been possible, but instead we collected rocks… 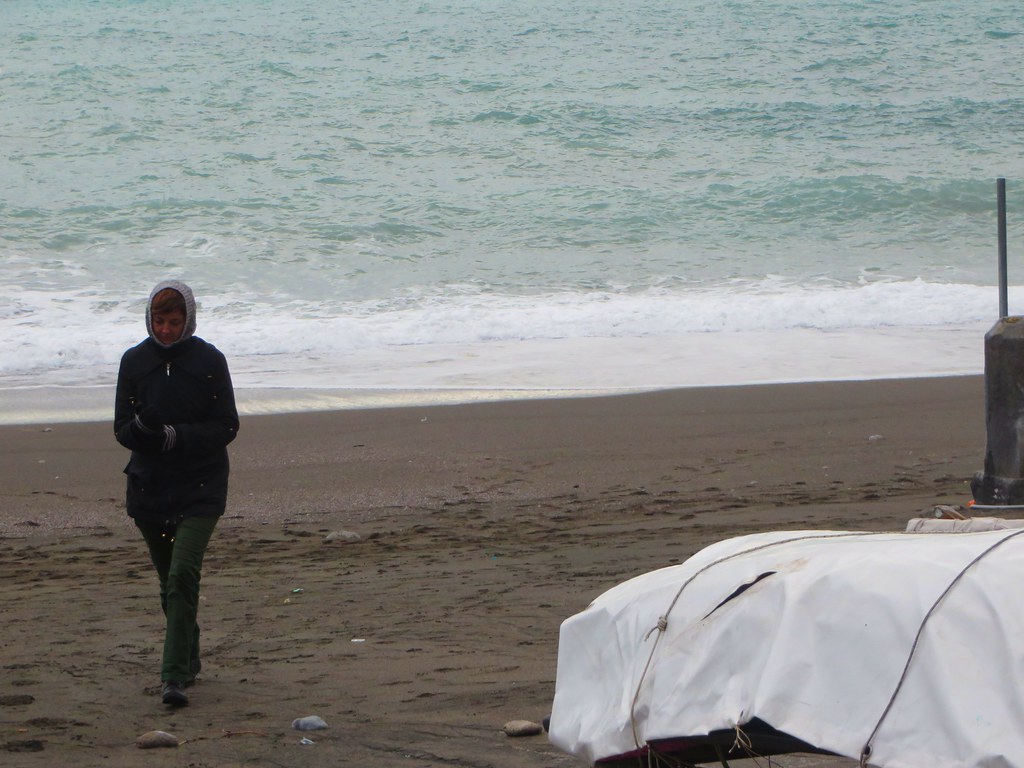 Read on the pier (and made new friends)… 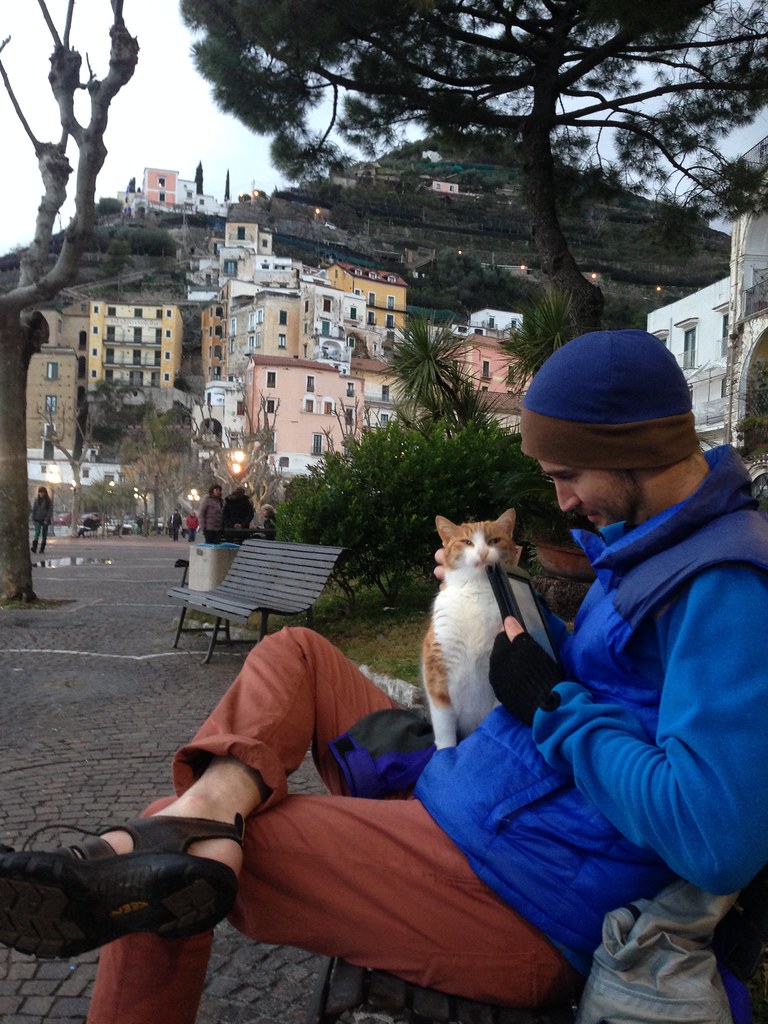 Watched the sunset roll in… 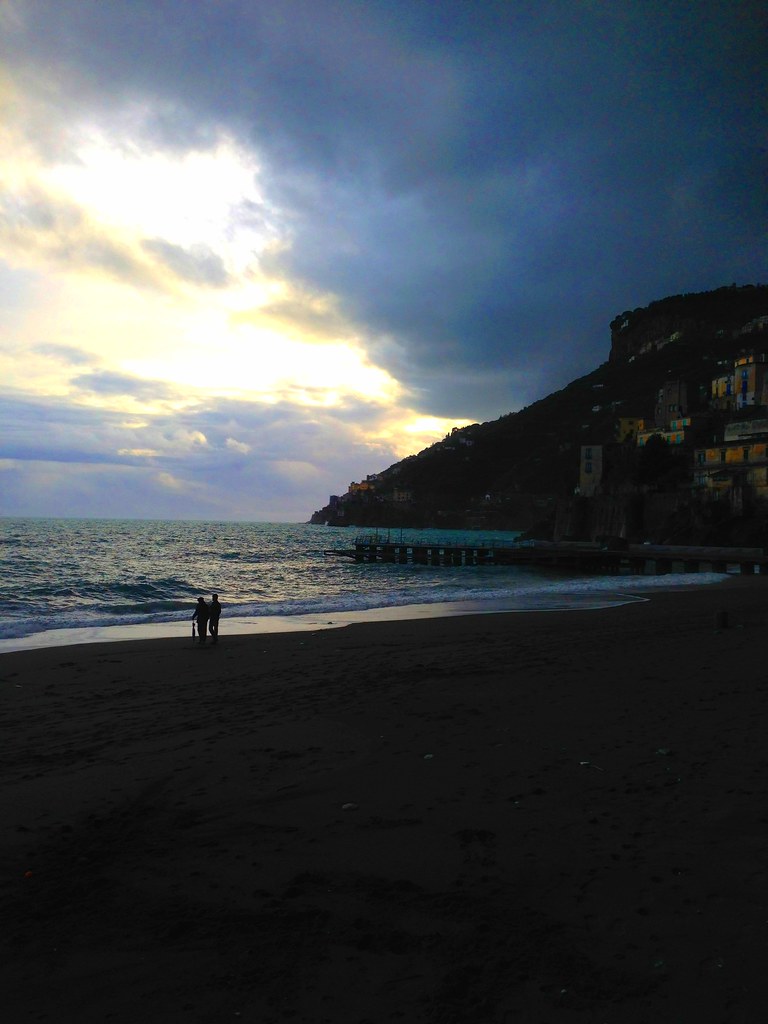 Enjoyed the town (and the cute little lemon trees)… 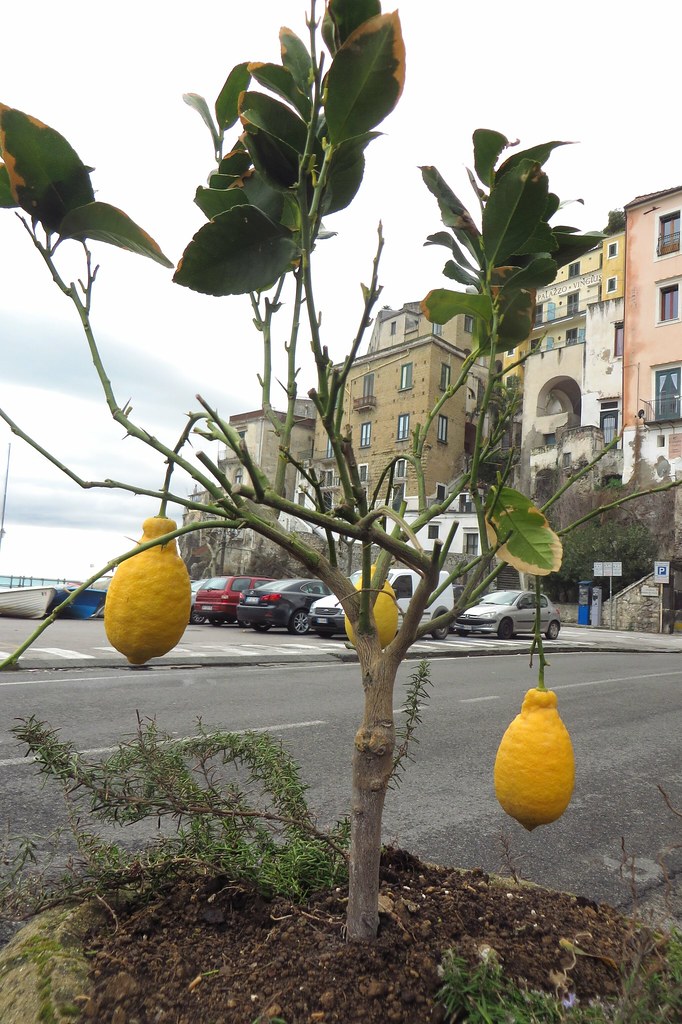 Ate some delicious pasta a couple of nights, and had a really memorable night chatting with the owner one night (we were the only ones in the restaurant, so we were lucky that way). Talking with her was a highlight of our time in Minori, as was her delicious homemade limoncello that she gave us at the end of our 2.5 hour long meal. It is interactions like these that are definitely one of the perks of traveling in the off season. We saw her on various nights of our stay, and both times she took our hands and greeted us like friends. It was great. 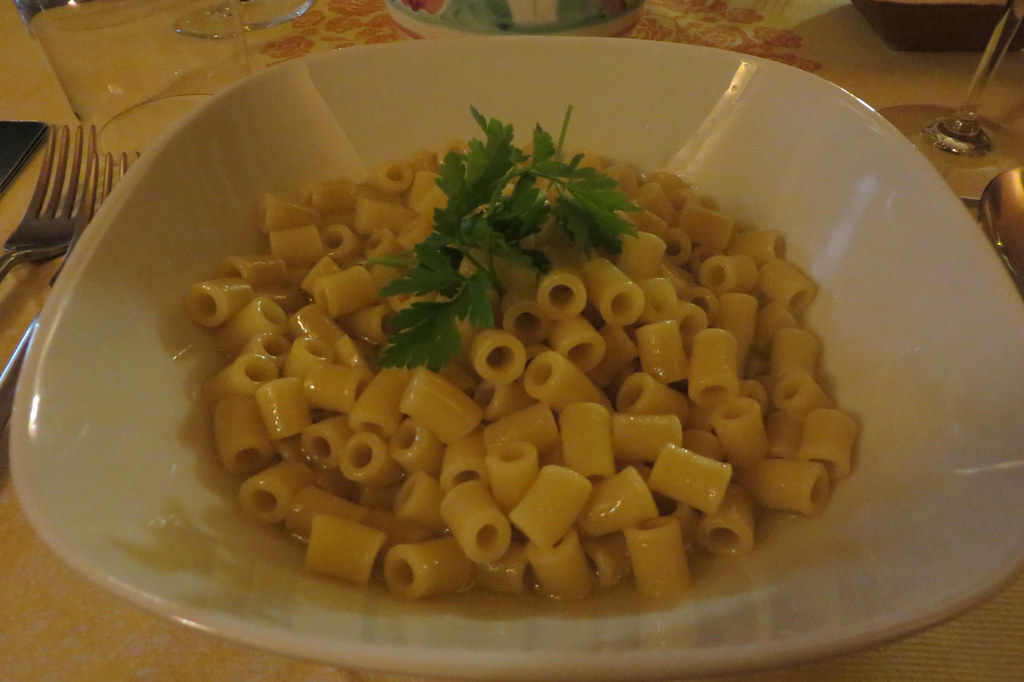 Enjoying views like this from our guesthouse (again, 950+ stairs up the side of a mountain just like you can see mirrored here) 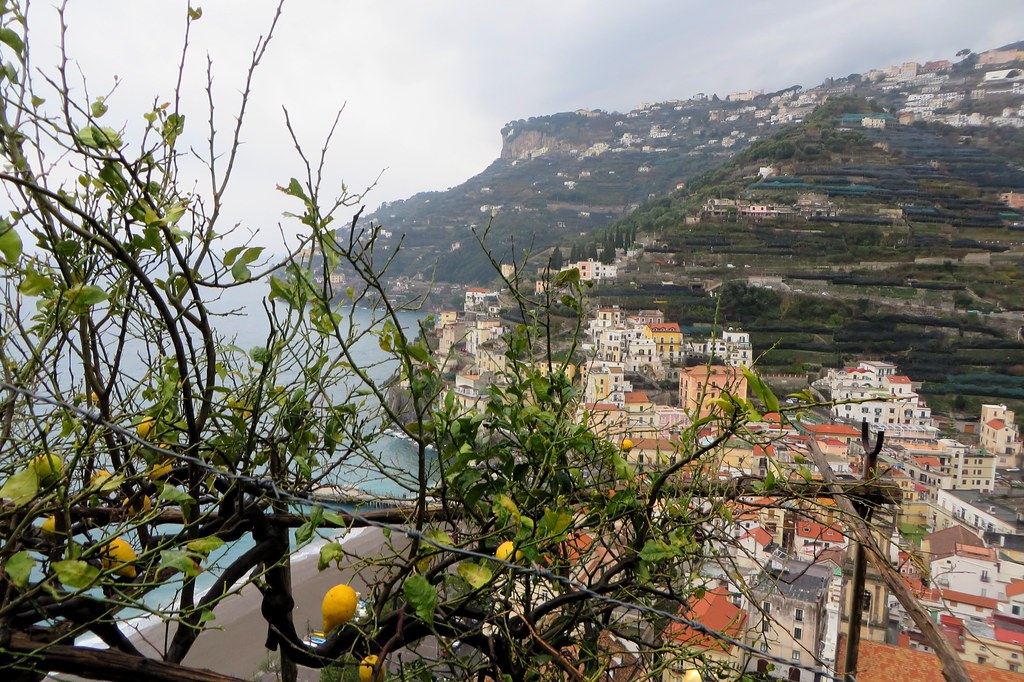 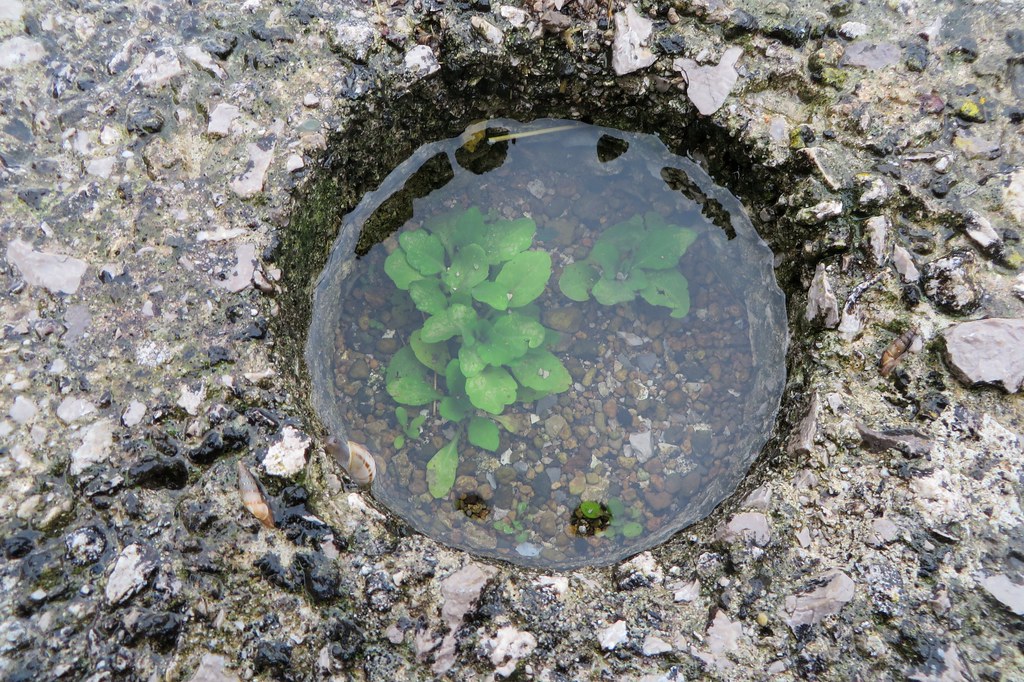 Walking from town to town on the windy sea-side roads…. 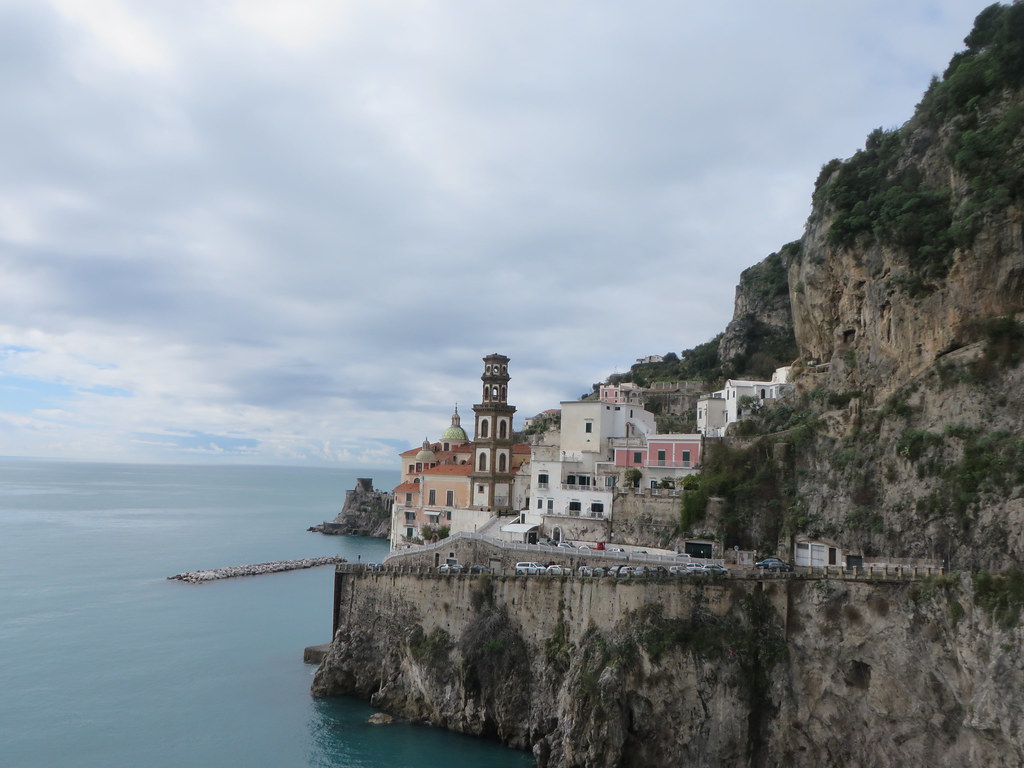 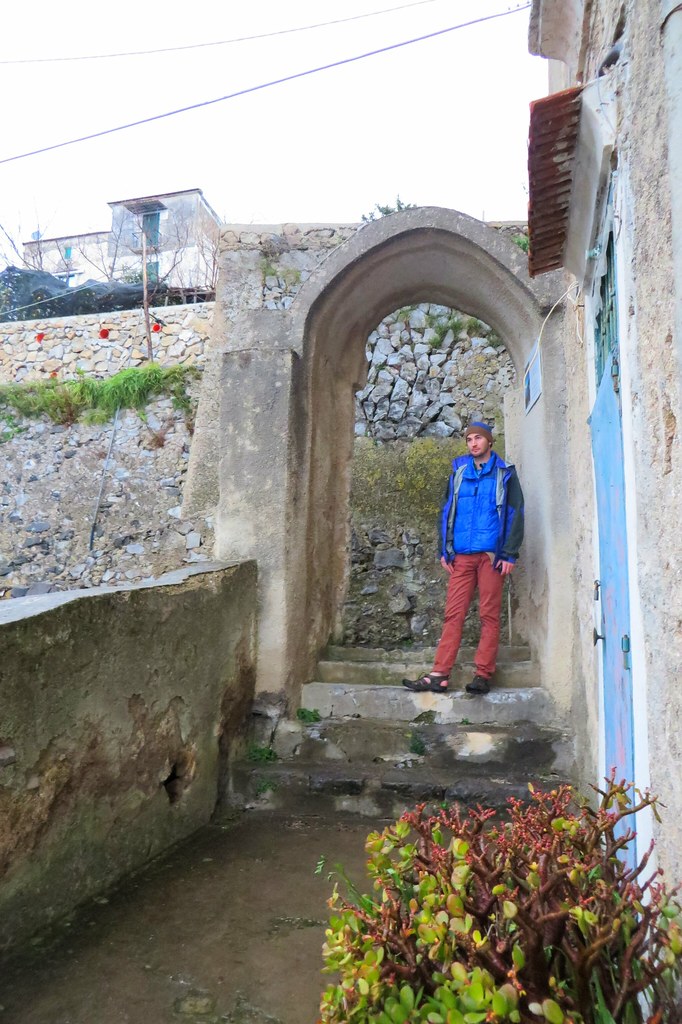 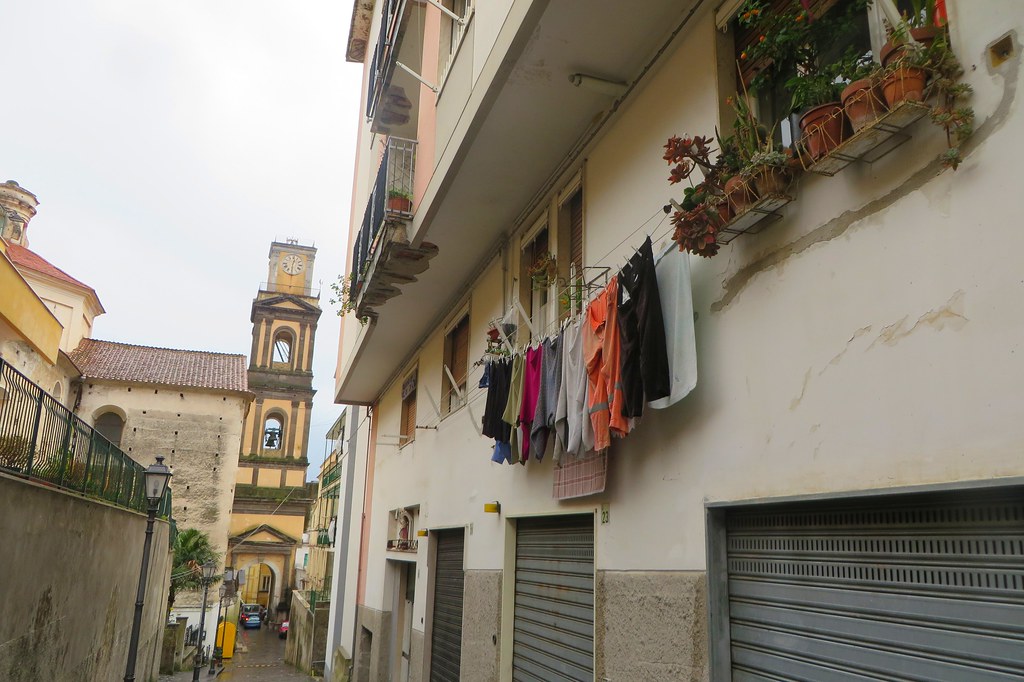 Enjoying the SEAFOOD pasta (where it couldn’t have been fresher!) 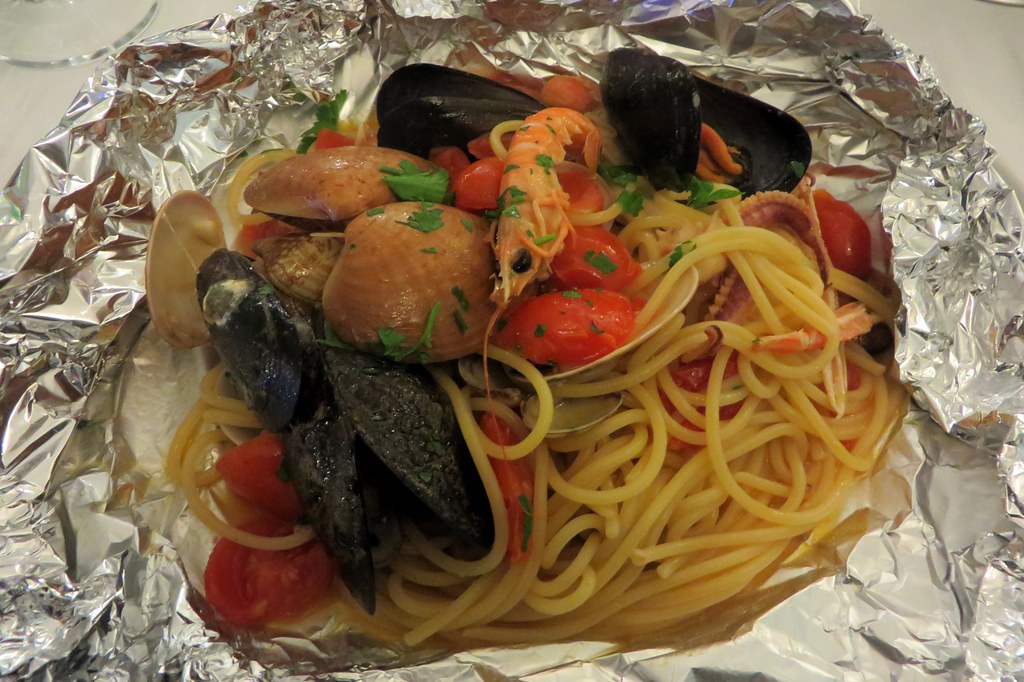 AND, taking a 7-course cooking class in Sorrento!

Because of all the rain (and the fact that we had been meaning to take a class while we were here), we decided to “bite the bullet” and take the class. After an almost 2 hour bus ride (only about 20km away, again, the switchbacks are no joke) we finally made it to the beautiful Sorrento. It was just us in the class, which was yet another instance where traveling in February has worked to our benefit. About an hour into our class, the chef’s father (speaking no English), beautiful mother (who was one of the classiest women I have ever met in person, and reminded me so much of my great-grandma) and aunt (also, Italian speaker only) arrived to come see what was happening, chat with us and talk food. Honestly, it was exactly like you might imagine an interaction with a bonafide Italian family might be. They were warm, and gracious, hilarious and honestly made our time 1,000 times better than it already was. It was awesome. All in all, our time in the Amalfi Coast was amazing. We were especially happy to have stayed in Minori, which was far less touristy than the other cities in the area. Despite our original plan to make our way south, south, south, we decided to head a bit north to Naples as rain was still in the forecast and we figured that if we were stranded in the rain, at least we would be able to indulge in copious amounts of pizza (which we did, but that’s for another post).