We decided to get back to our backpacker roots (or something) in Rome and stay at a hostel. The hostel was OK, though the common area (the main reason to stay at a hostel in my opinion) was outside of the building and down the street half a block. This wasn’t a huge deal, except for the fact that when we asked the guy working at the front desk if there was a common area at all he told us no but that they were building one (there was construction going on). It was something of a confusing mis-communication. Oh well.

So, Rome. I feel like the past few blog posts are a bit boring in terms of listing things we did, and that’s mainly because we are following a pretty standard tourist path in some of these cities. Any photos you’ve seen of Rome pretty much sum up what we did in Rome.

We went to the Vatican Museum and saw all of the crazy/famous/interesting/old/plentiful art that lives there. 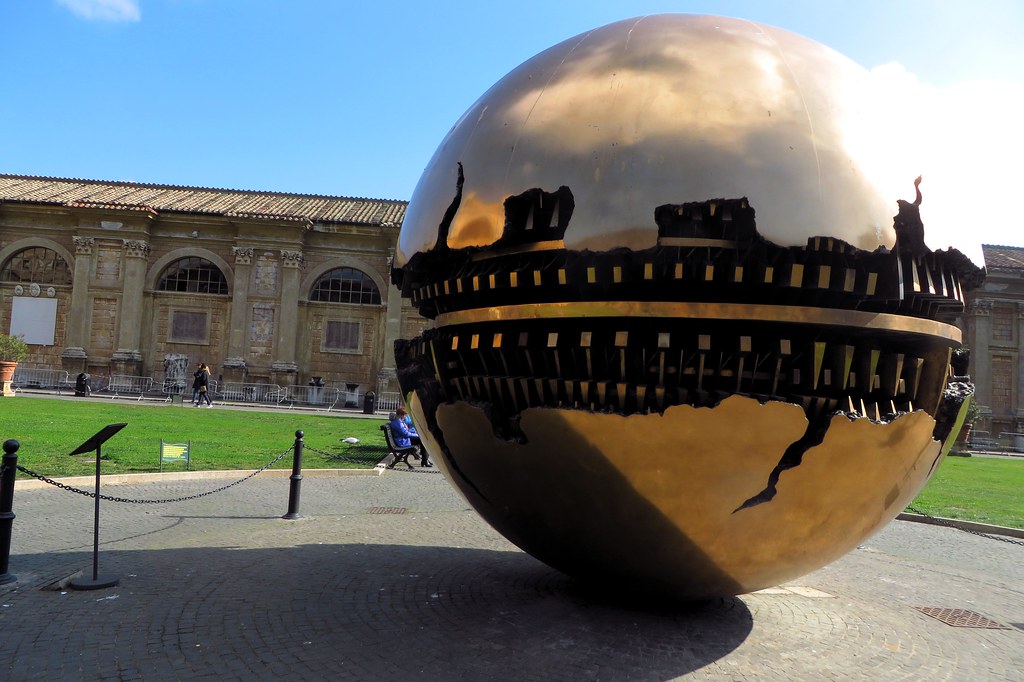 We were lucky that we didn’t have to wait in line for more than 20 minutes to get in, but that said, truly the Vatican is overwhelming. We read online that there is apparently 7km of stuff inside Vatican city to see. Crazy. So, we saw what we could see without wanting to kill ourselves and drank cappuccino out in the square when we thought we might. Squeezed through the Sistine Chapel and ooh-ed and ahh-ed in the map room (which was the coolest gallery by far, in our opinion). 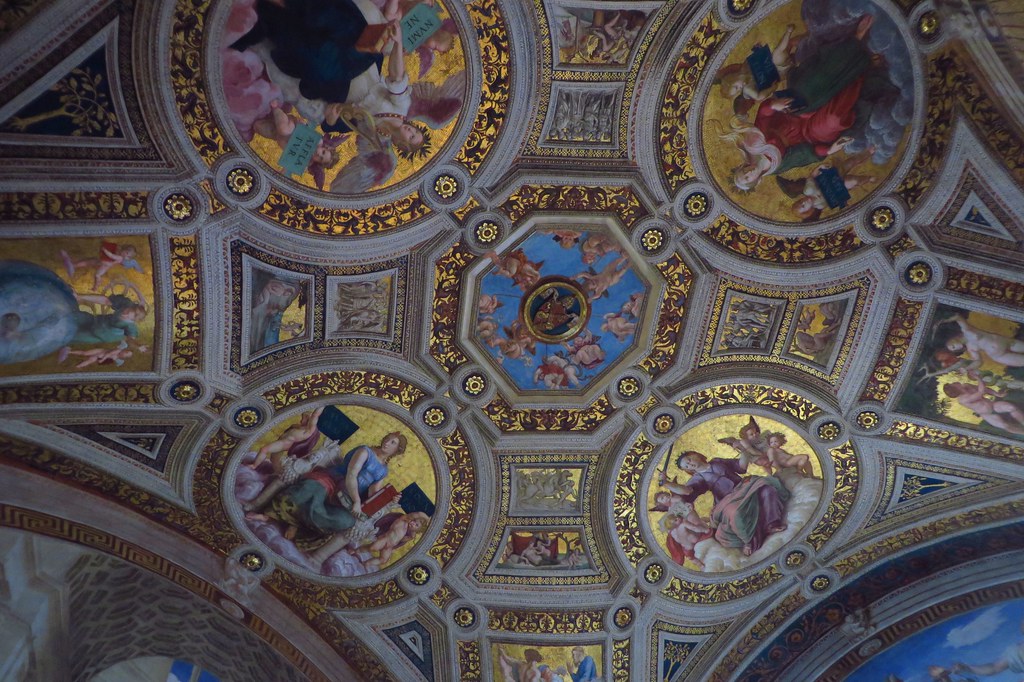 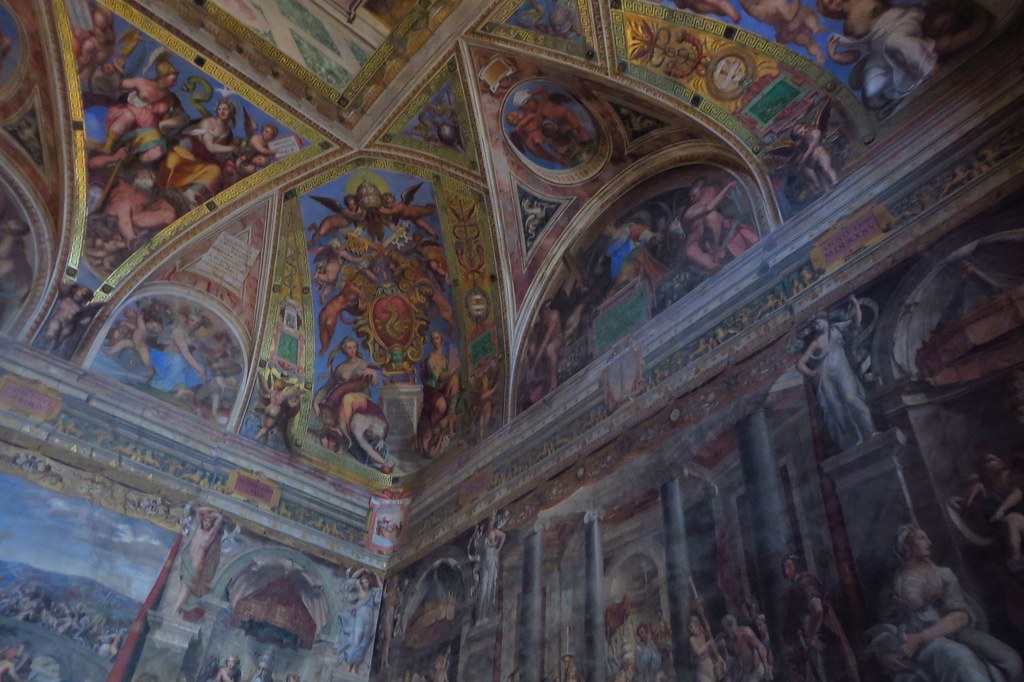 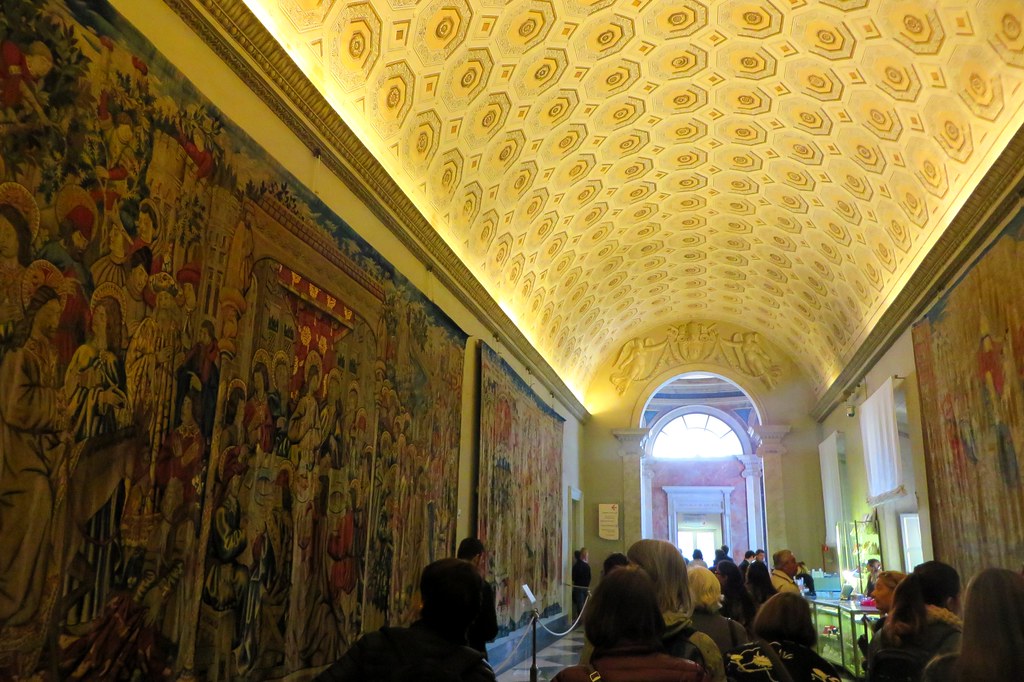 We sent some mail from Vatican city (get excited) 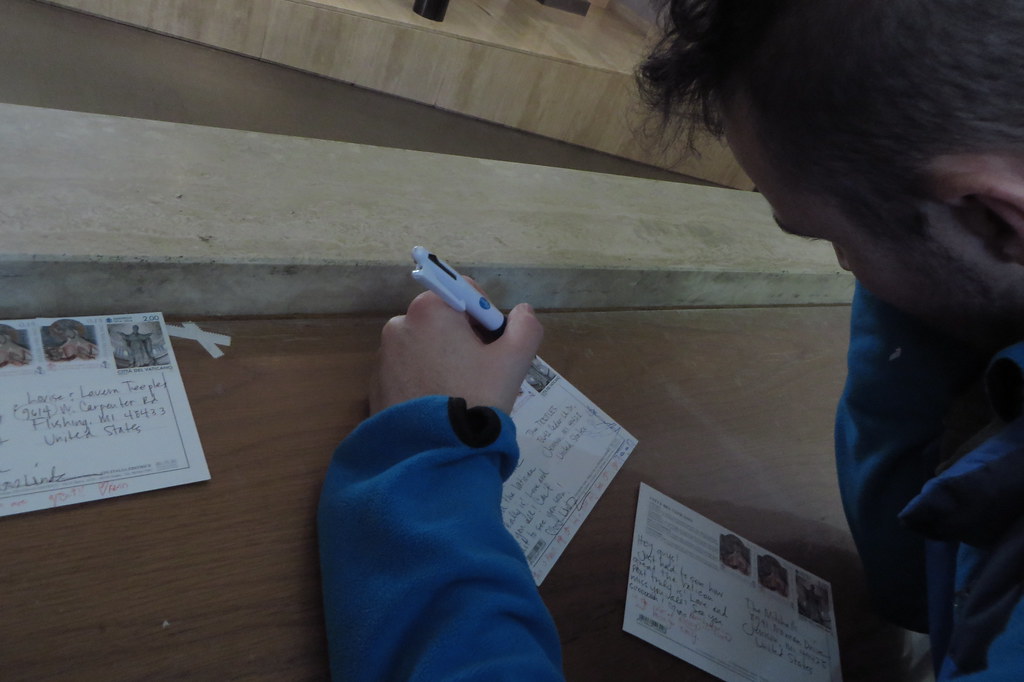 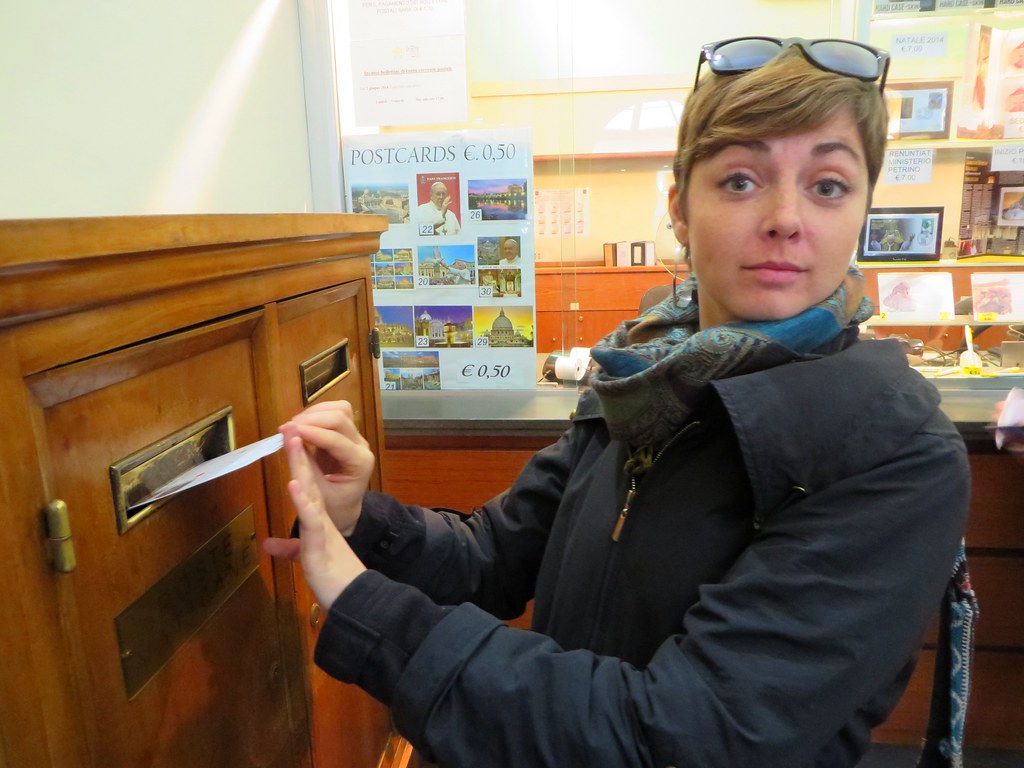 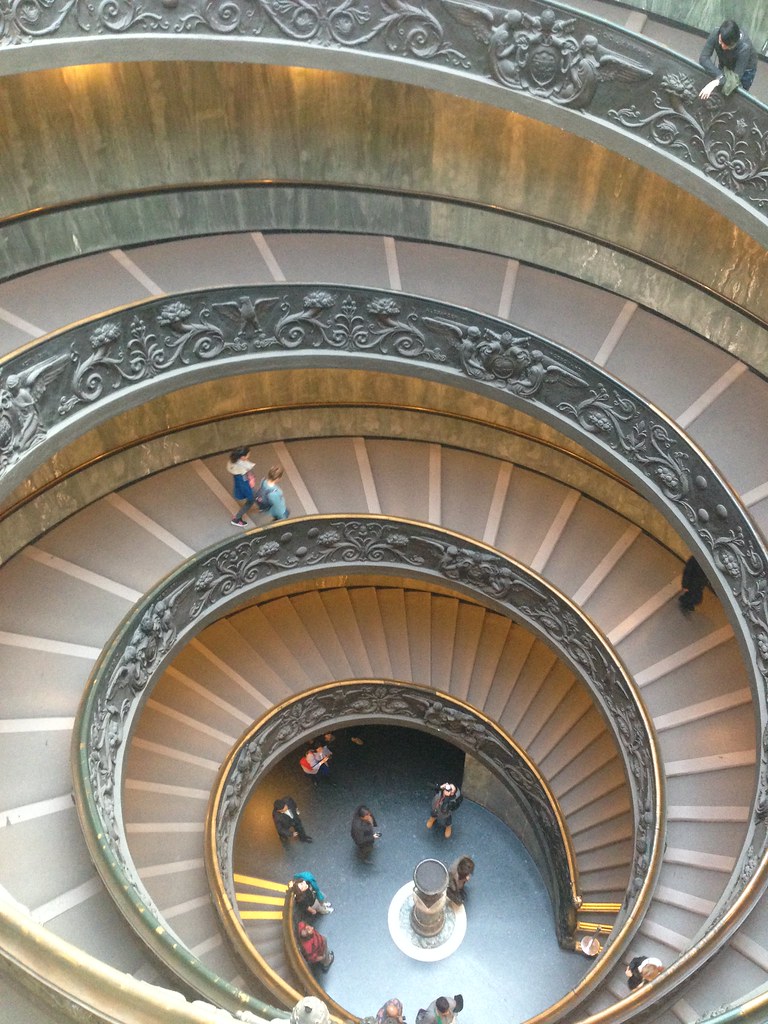 we walked to St. Peter’s Basillica which was INSANE (this picture shows nothing). The line of people wrapped around the square was incredible. It must have taken them all day to get in. 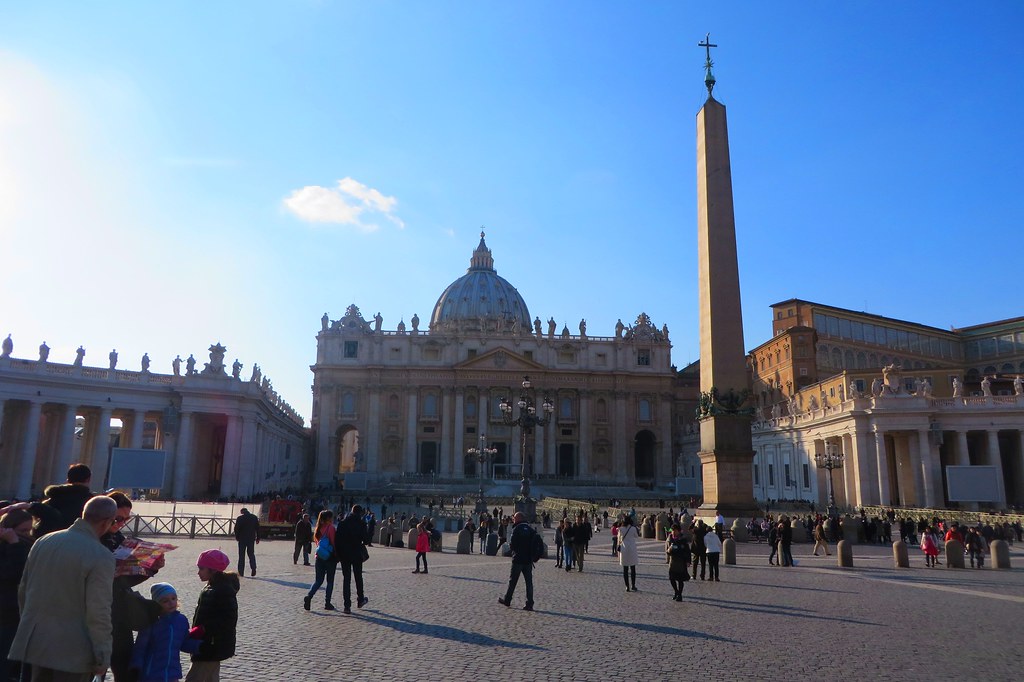 We decided (after moseying around for a bit debating whether or not we should get in line) we would instead walk to the Coliseum, which was no small feat, instead. The weather was nothing short of perfect – blue skies and a small breeze to boot, so we figured we’d go for it. 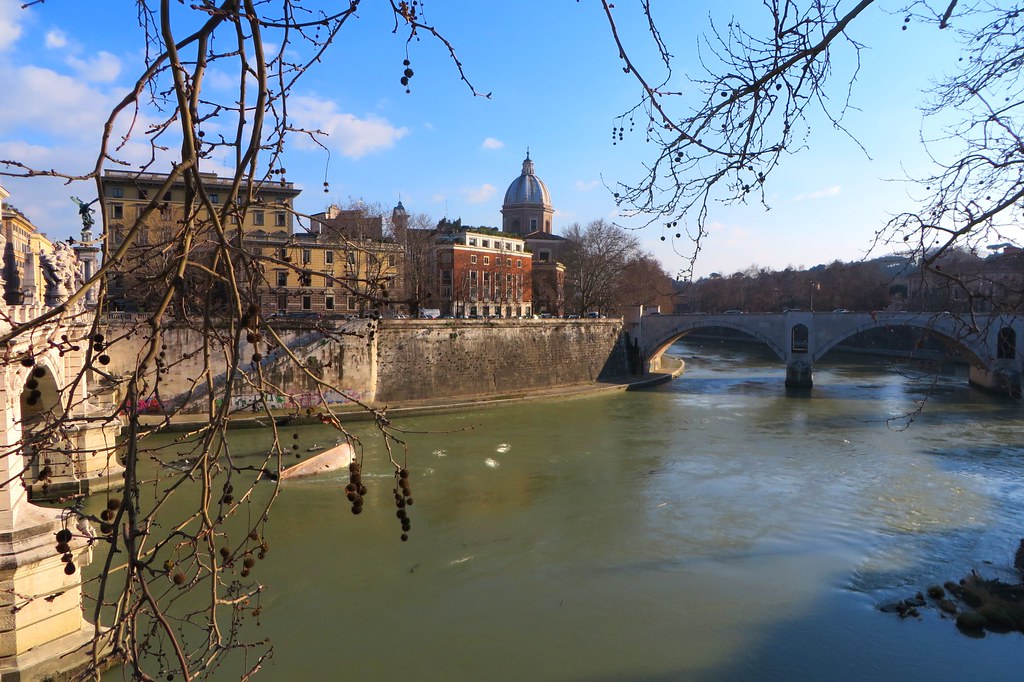 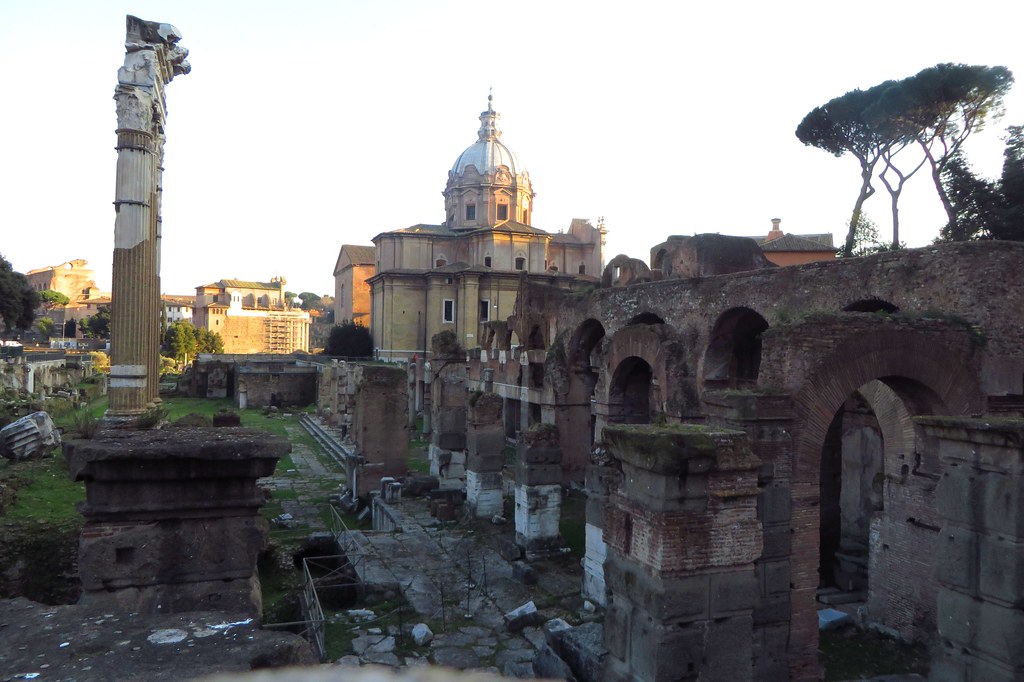 Not too far into our walk, the sun started to set, and it was magic. 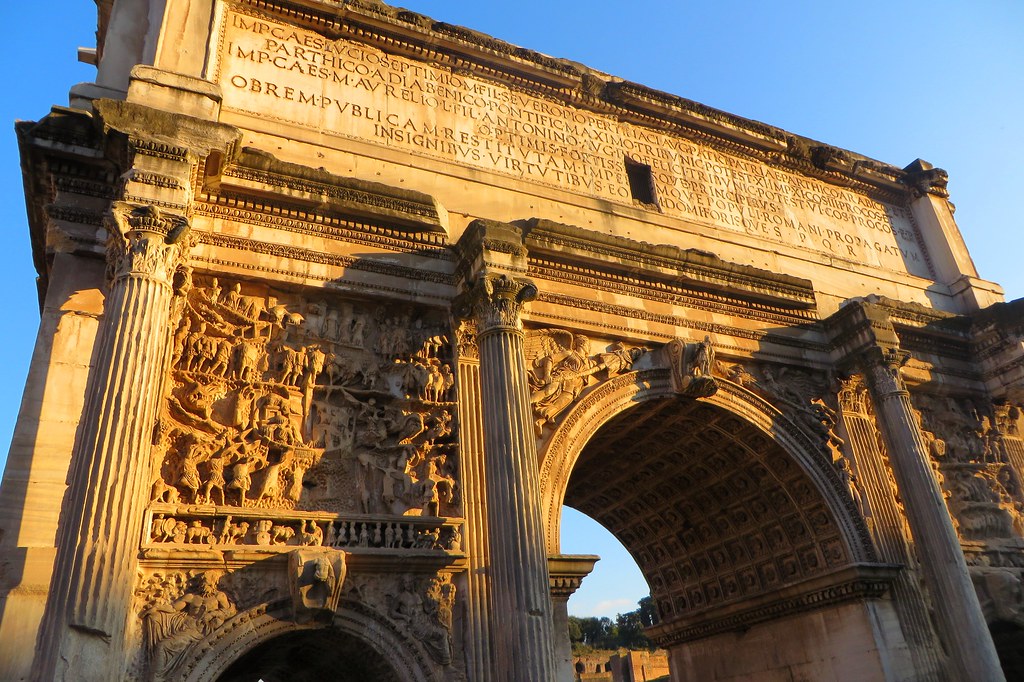 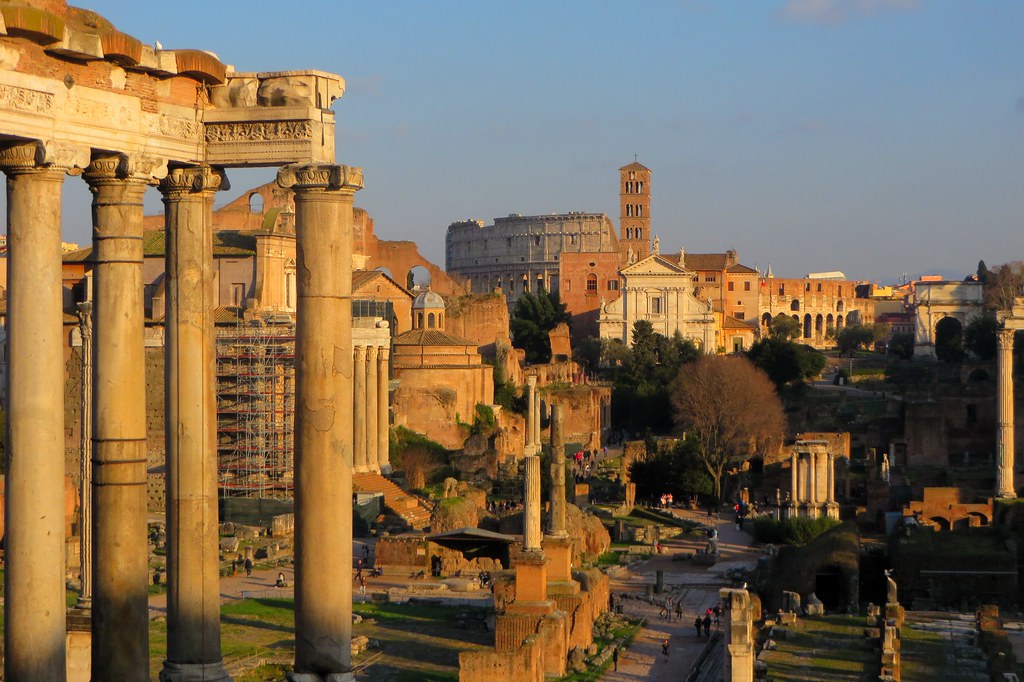 And, we finally made it! 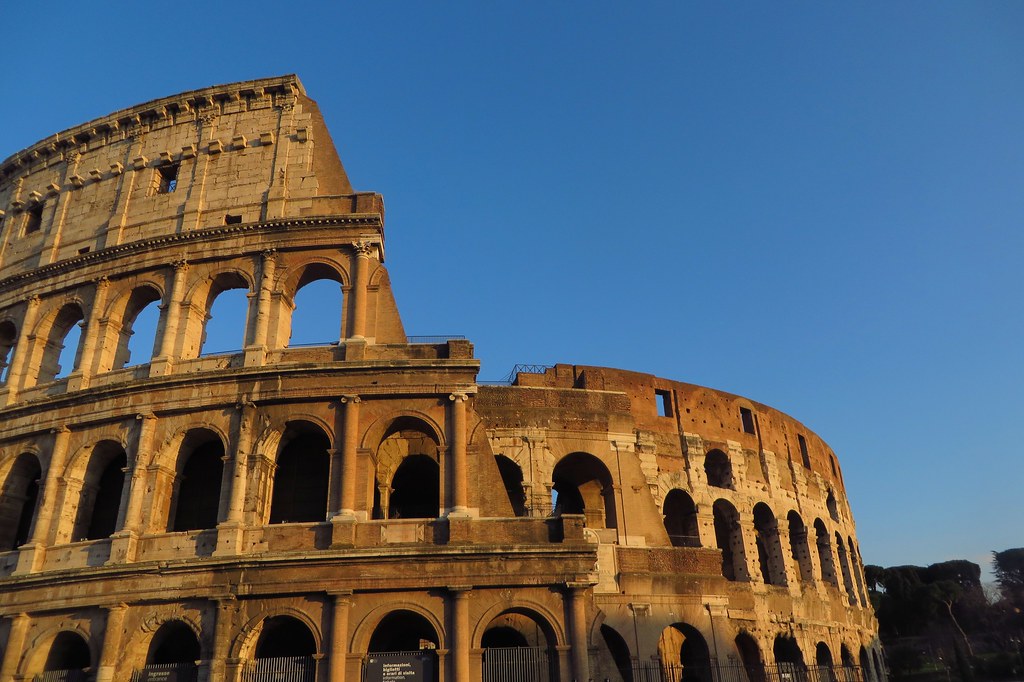 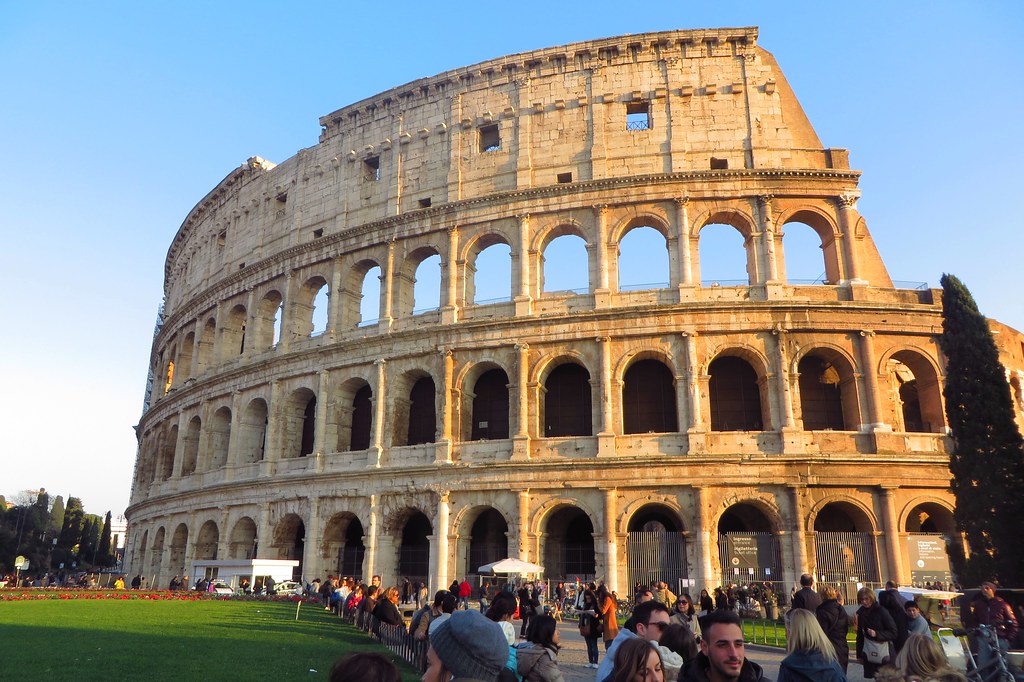 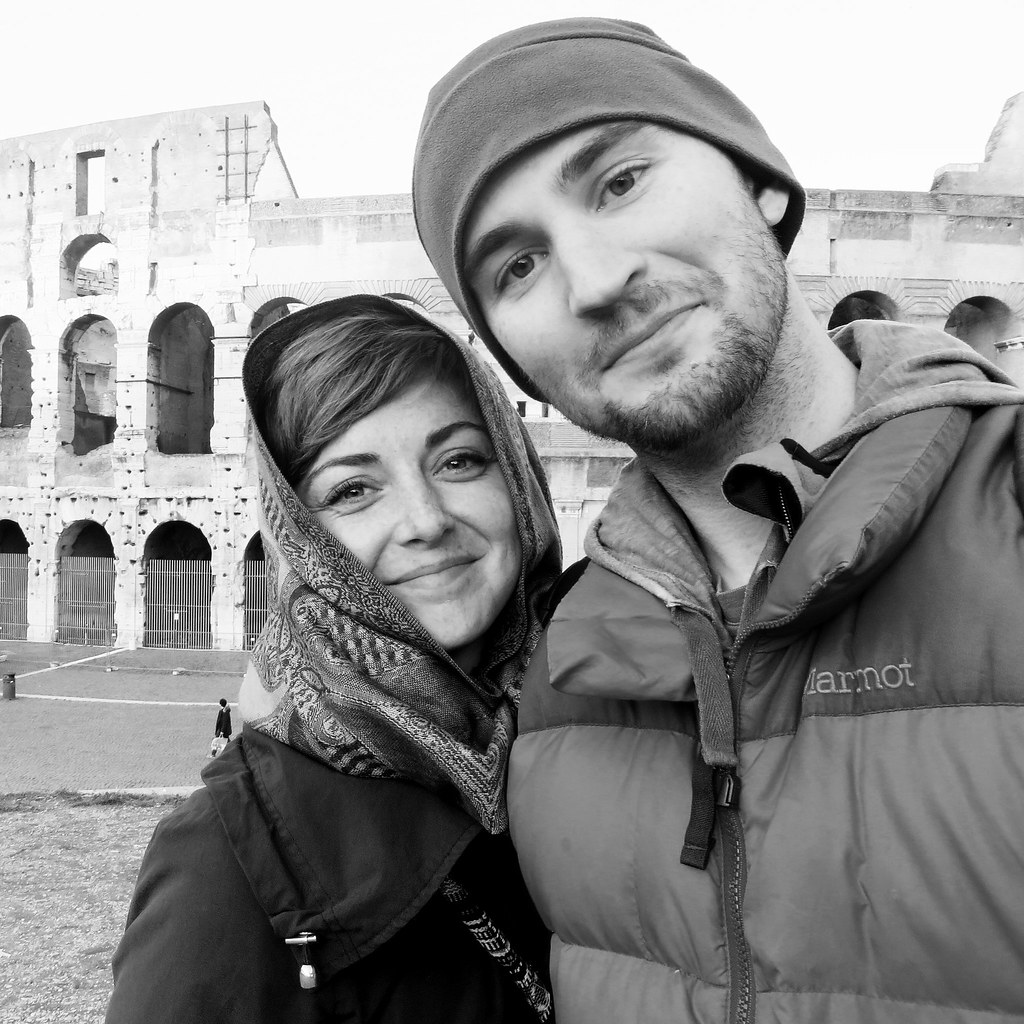 That night, we were starving. We decided to walk (a bit further :)) to a restarant we were alerted to by a chick we rode with on our way from Florence that she and her friends recommended. After arriving an hour earlier than it opened (damn Italians and their late night eating!) we sat in a nearby park and read. Our wait turned out to be worth it, as we had a bunch of amazing food, including carbonara which is something Rome is known for (we had it twice at two different restaurants) 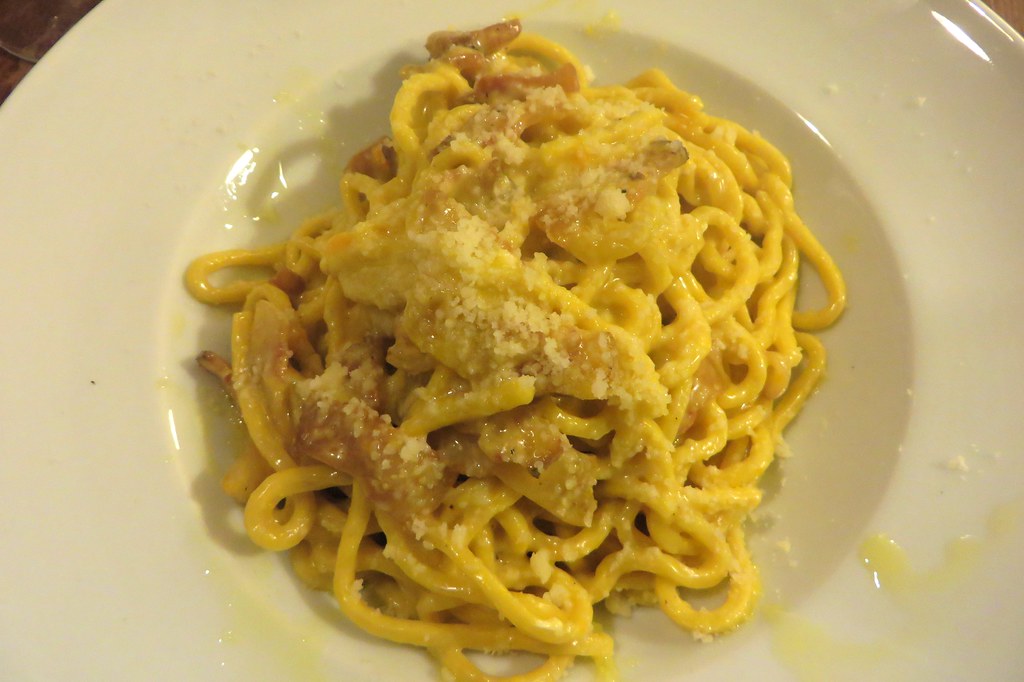 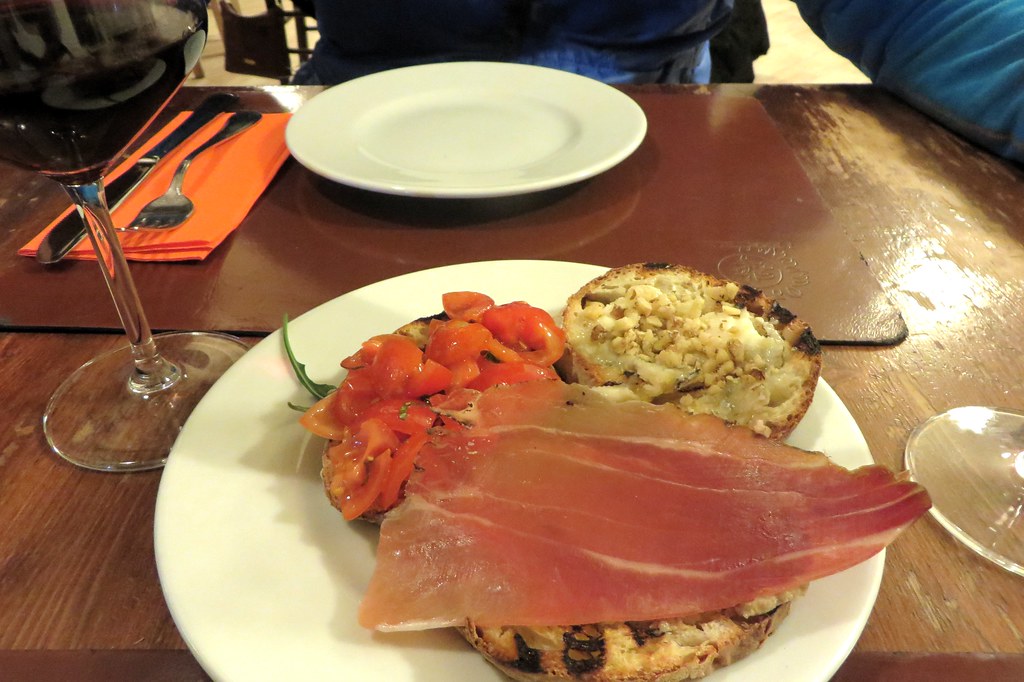 and some other mushroom/pancetta pasta, which was pretty awesome. 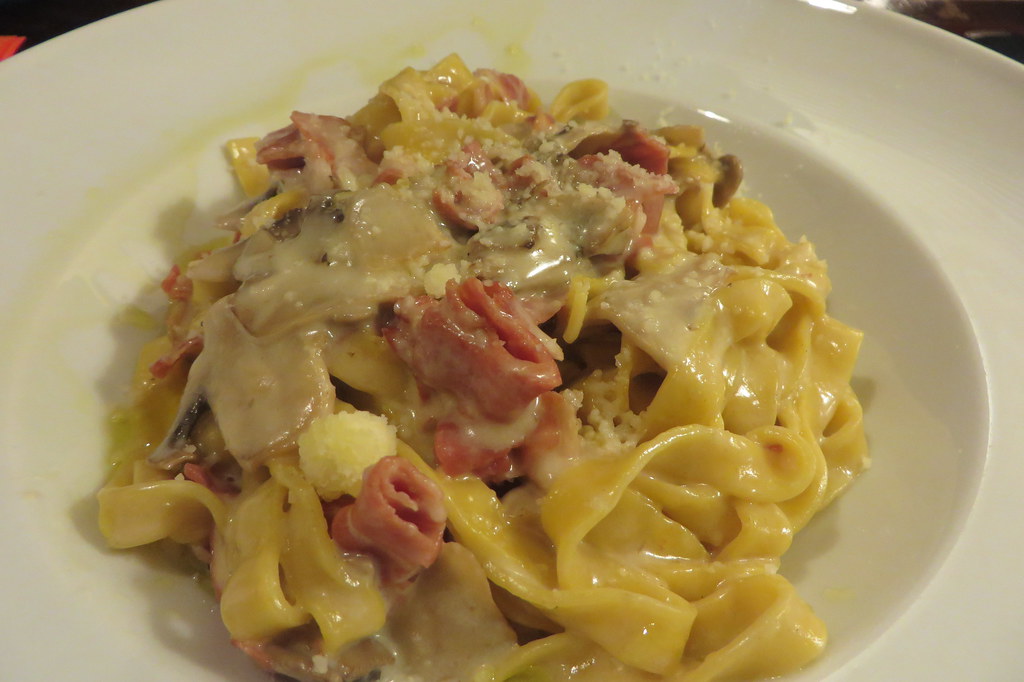 The next day, after seeing all of the major sites we planned to see, we stopped to have a quick “breakfast” 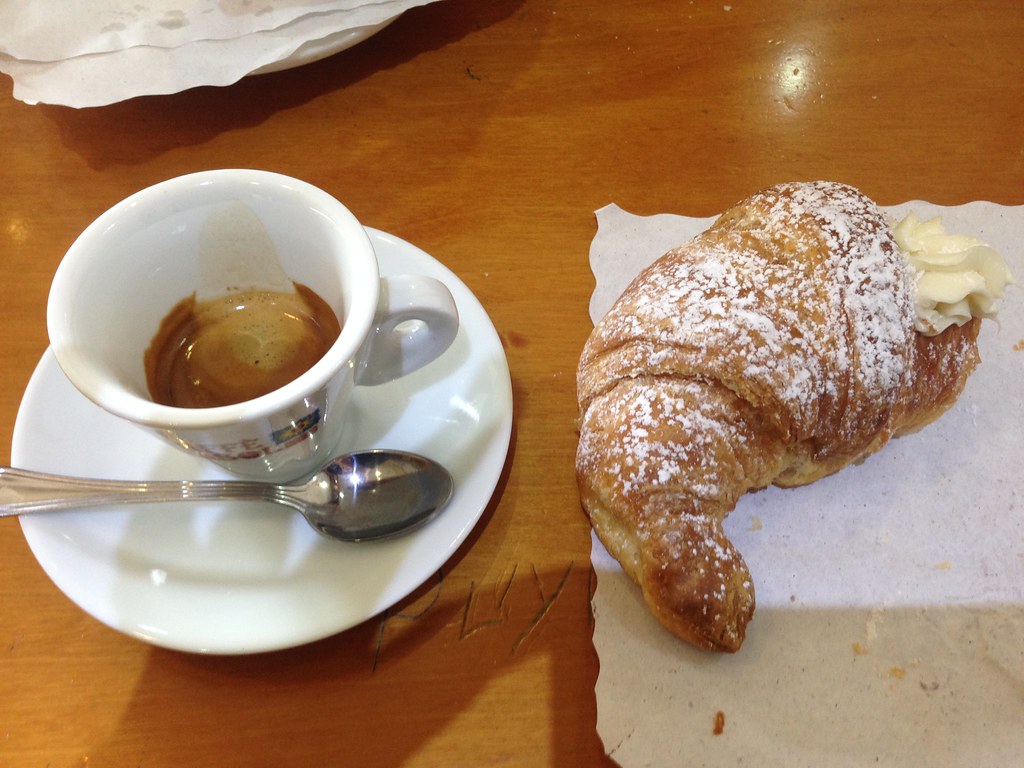 and cruised around the streets. After about an hour, we happened across a grocery store which enabled us to have one of the best lunches I’ve ever had. This grocery store was really amazing (not fancy), and it kind of felt like something in a movie. A bunch of dudes cutting meat from 15 different types of cheap, beautiful prosciutto. Fresh mozzarella (that is again) super cheap! but also amazing quality. The strange thing for us was that there were literally legs of animals sitting on the counter that you could have cured meat cut from. Anyway, the lunch was awesome. We bought fresh tomatoes, basil, mozzarella balls (again :)), 2 types of fresh-cut deli meat, 2 types of fancy fresh foccacia bread, a hard cheese of some sort, apples, and a bunch of peel-and-eat shrimp. It was a feast, to say the least (all for 15 euros). 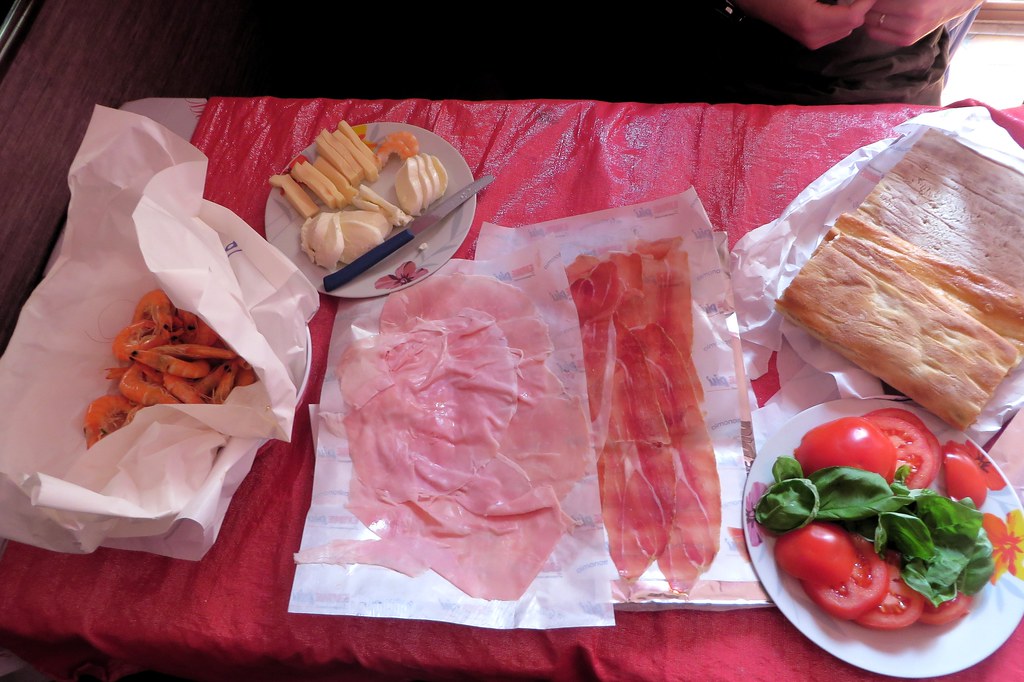 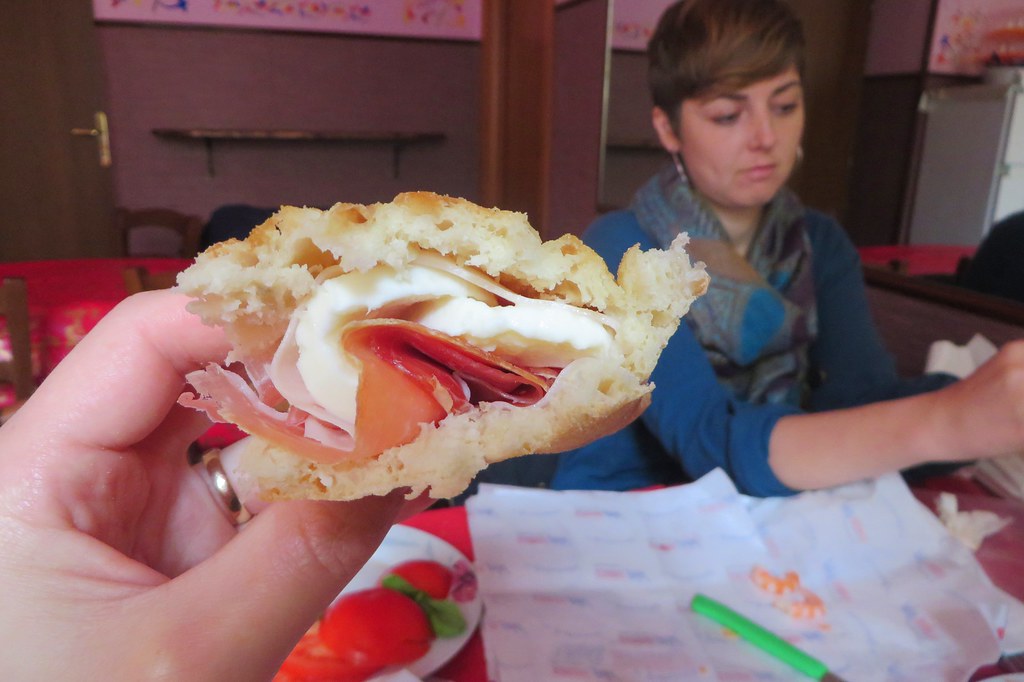 So, I suppose those were the highlights of our time in Rome. We were only there for 2 days (short and sweet!) but I feel like we capitalized on all of the main attractions and really enjoyed ourselves.