From Ancona, as I mentioned previously, we decided that we’d go North to Venice. Actually, Lindsay decided that, and when she told me she had decided this was a good idea I was thrilled because it seemed “smart.” I imagine traveling to a new countries in the way that we are traveling to new countries is sort of like what it must be like for a novice sculpture (let’s say the goal is to sculpt a life size dog) to start a new project with a giant, huge, block of clay. It’s tough to know where to start, and it’s tough to know once you’ve started if you’ve started in the right way. But, once you REALLY get started, then things start to fall into place and you realize that at least you’ve started. Or at least that’s how I imagine us…or something.

Anyway, we decided to go to Venice. 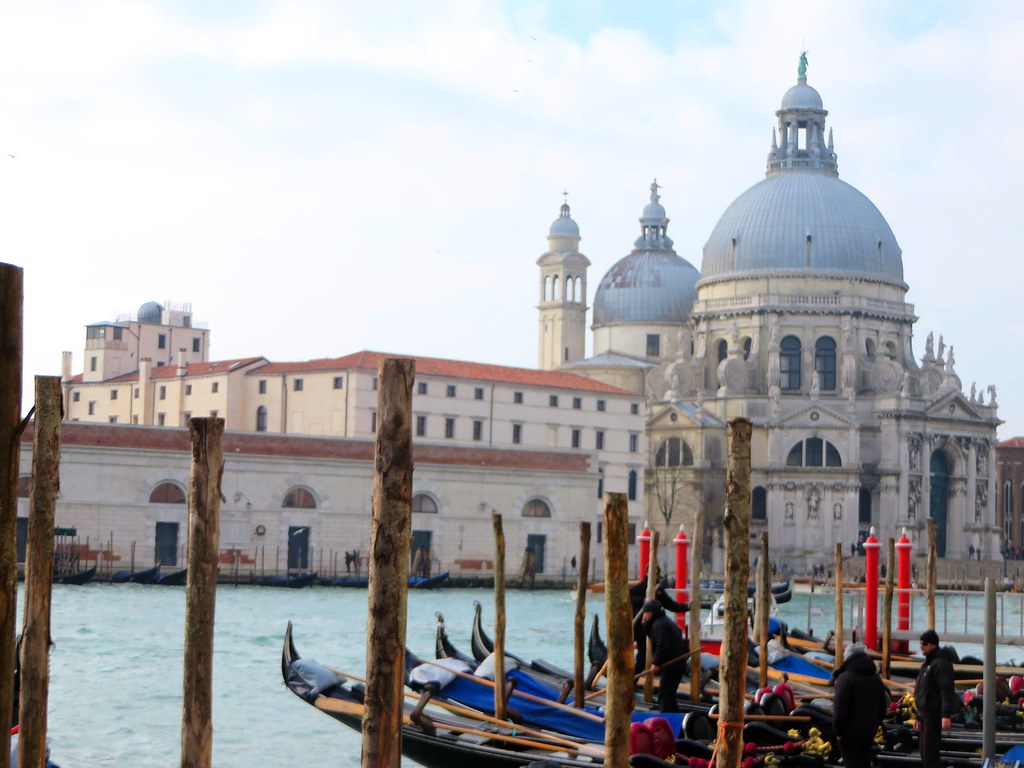 We used Bla Bla Car (a website) and found a ride with two really nice guys (Pablo and Alfredo!). We met at Ikea (which was so awesome, because I love Ikea) and made the three hour drive with these two really nice Italian guys.
Lindsay drinking a beer in IKEA 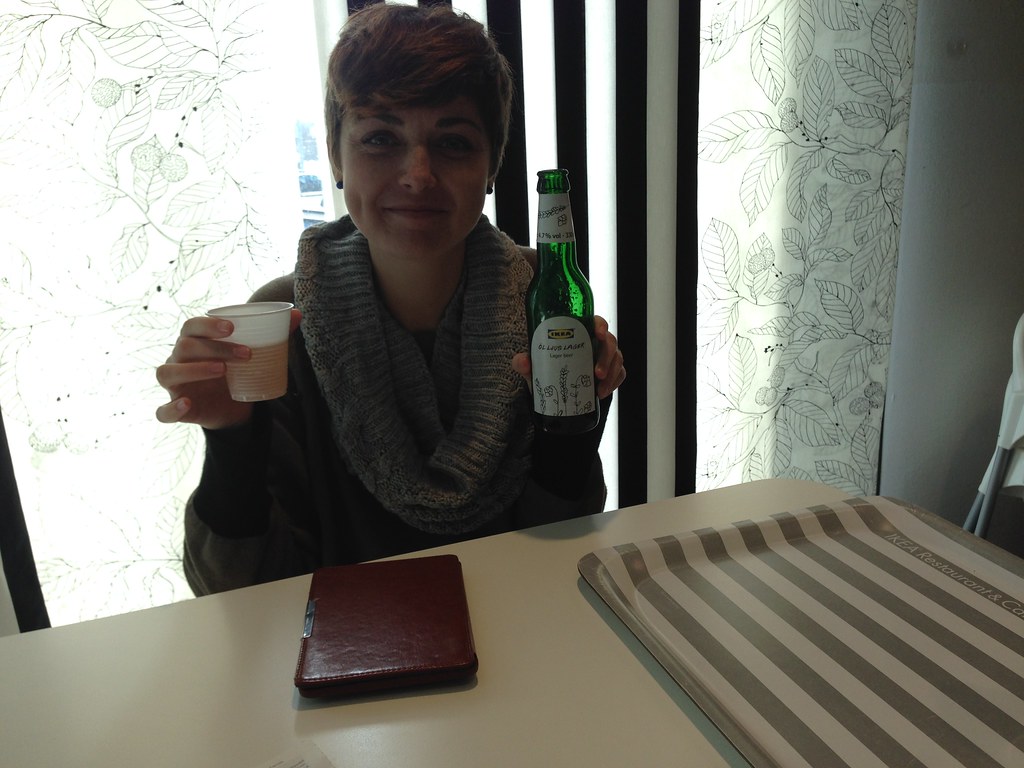 Actually, one of the dudes was born in Argentina, but had lived in Italy for most of his life. Aside: there are a huge number of Argentinians in Italy it seems, or we just randomly keep running into them for some reason.

The drive was nice, and I technically was in Bologna (I stepped out of the car for 10 seconds, Lindsay did not. For the record – although she won’t let me count that) when we dropped Pablo off. Bologna being one of the “big” cities in Italy that Lindsay and I didn’t really visit.

On the drive, we found out that Carnevale (which is how they spell it, btw) was happening in Venice when we were going to be there. It’s a bit difficult to explain how awesome this was, but basically there wasn’t a better time to be visiting Venice than during Carnevale season. This also explained why it was so difficult finding a room (Lindsay did an awesome job and we ended up staying right near Saint Marco Square), and why the cheapest room we found was 70 euros. 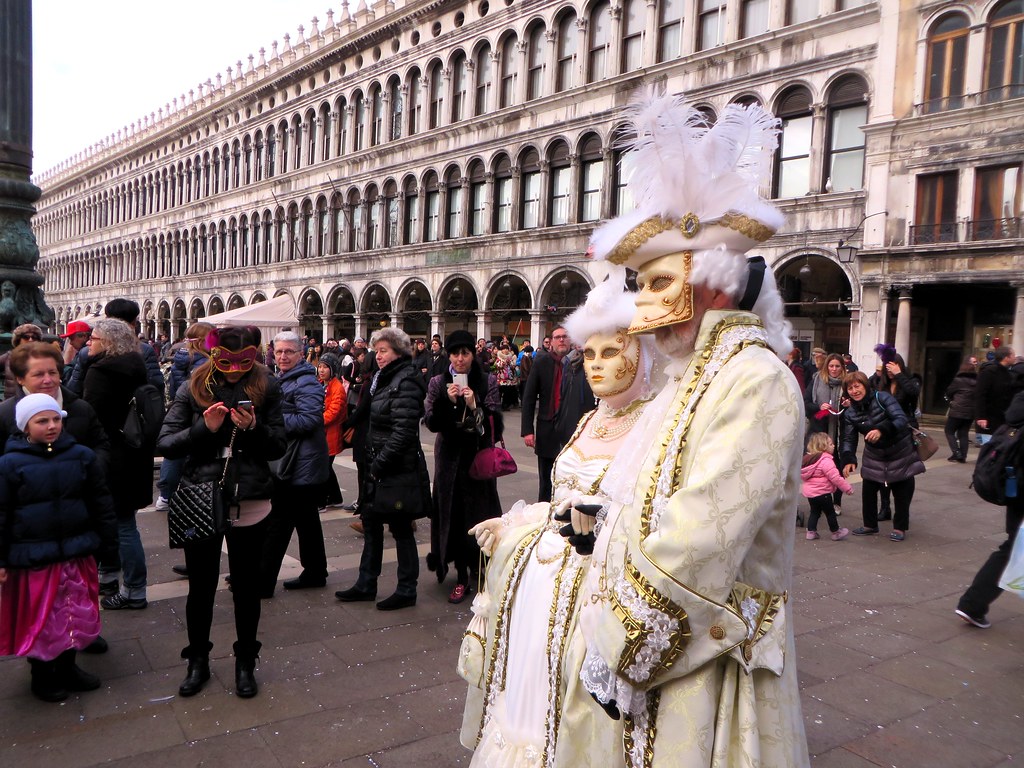 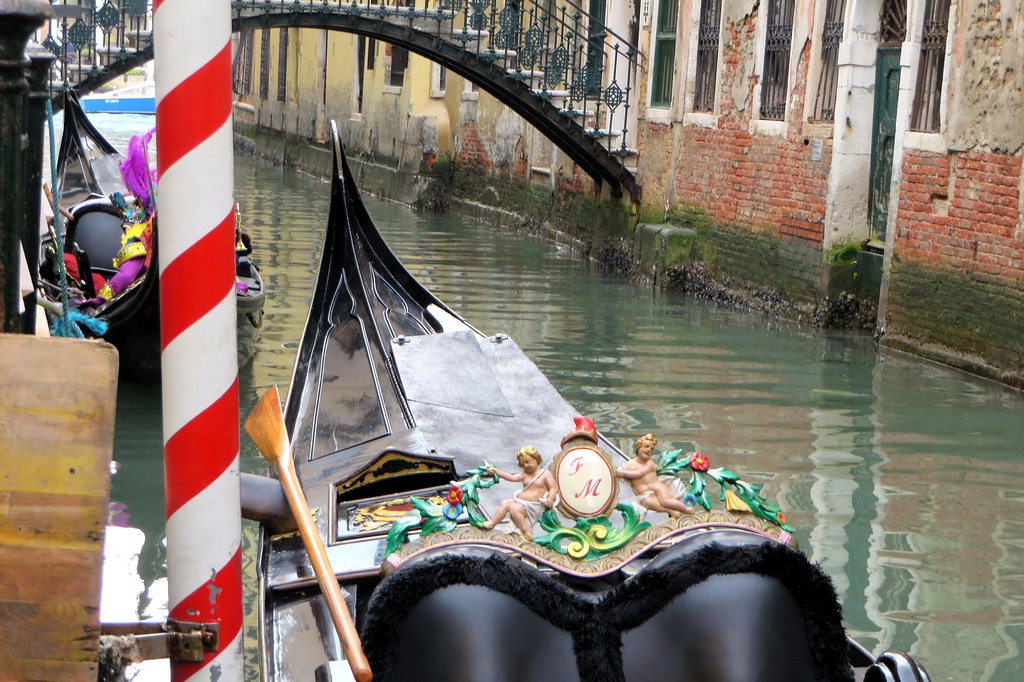 Carnevale is a big deal it turns out in Venice, and when we got there at night after taking a train from the nearby city that our driver dropped us off at, it was like a totally different travel experience then we’ve had so far. In general, everywhere we’ve gone in Europe has been pretty dead as far as other tourists go, but when we got to Venice the streets were PACKED with people dressed up in costumes, throwing glitter and confetti, etc. The shops were all open, vendors were outside selling mulled wine, and in general it was a pretty big/awesome/beautiful party. It felt like we stepped into a movie about how cool Venice is on accident. It was awesome.

So we hopped off the train and wee walked a good 2 or 3 kilometers through the zig-zagged streets/canals/etc of Venice and eventually found our hotel. It was nice enough, though very loud (which actually was sort of nice itself) because of all of the people singing/laughing/yelling/talking on the streets below. 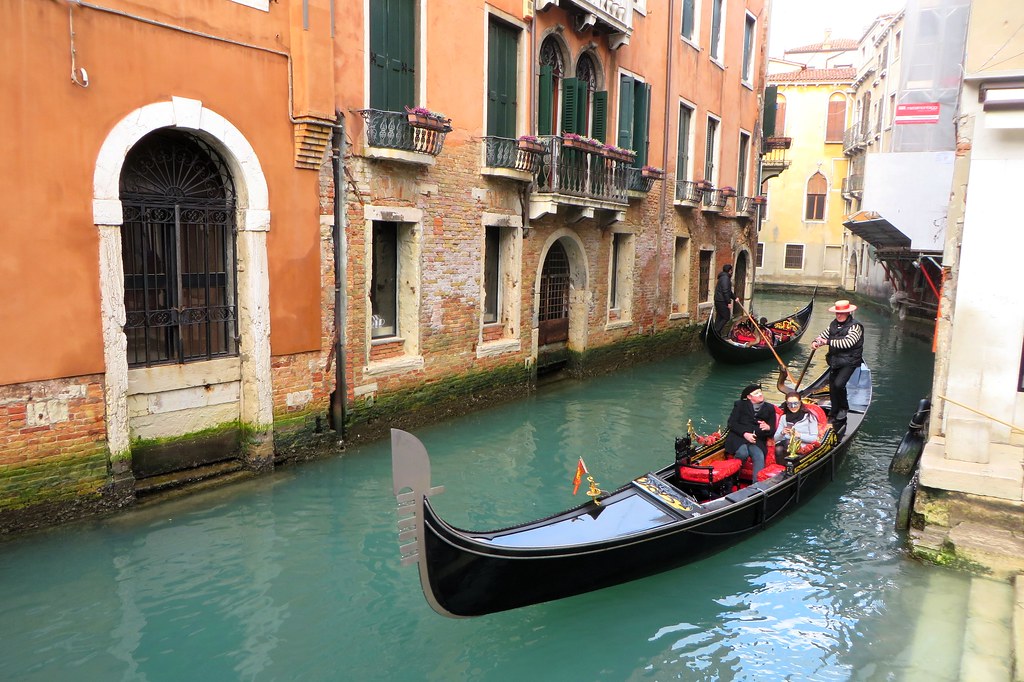 Here I am with all of my devices (compass, GPS and phone trying my best to be inconspicuous) 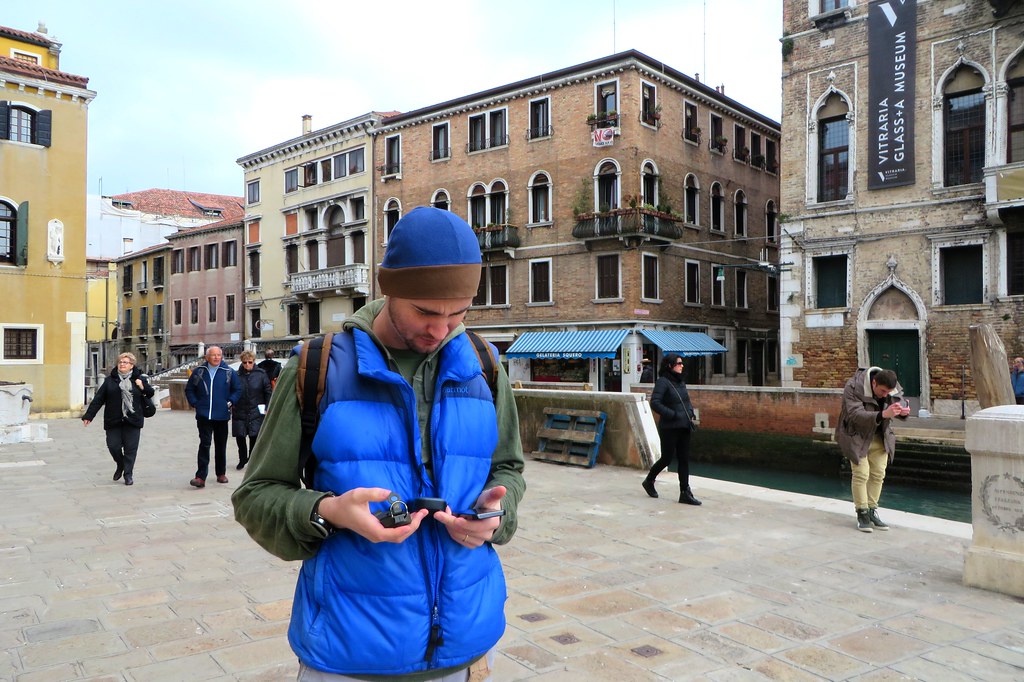 So, unfortunately the rest of our time in Venice was spent doing basically the same thing we always do: walking around and people watching. So, pictures will hopefully give an idea of what things were like. 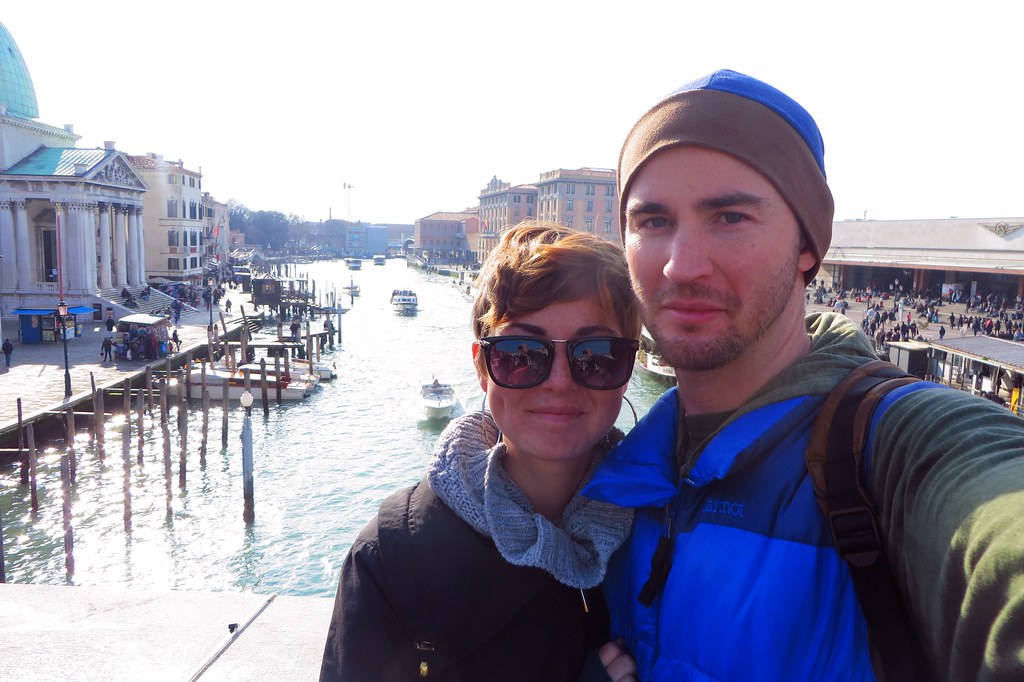 Some memories specific memories include: 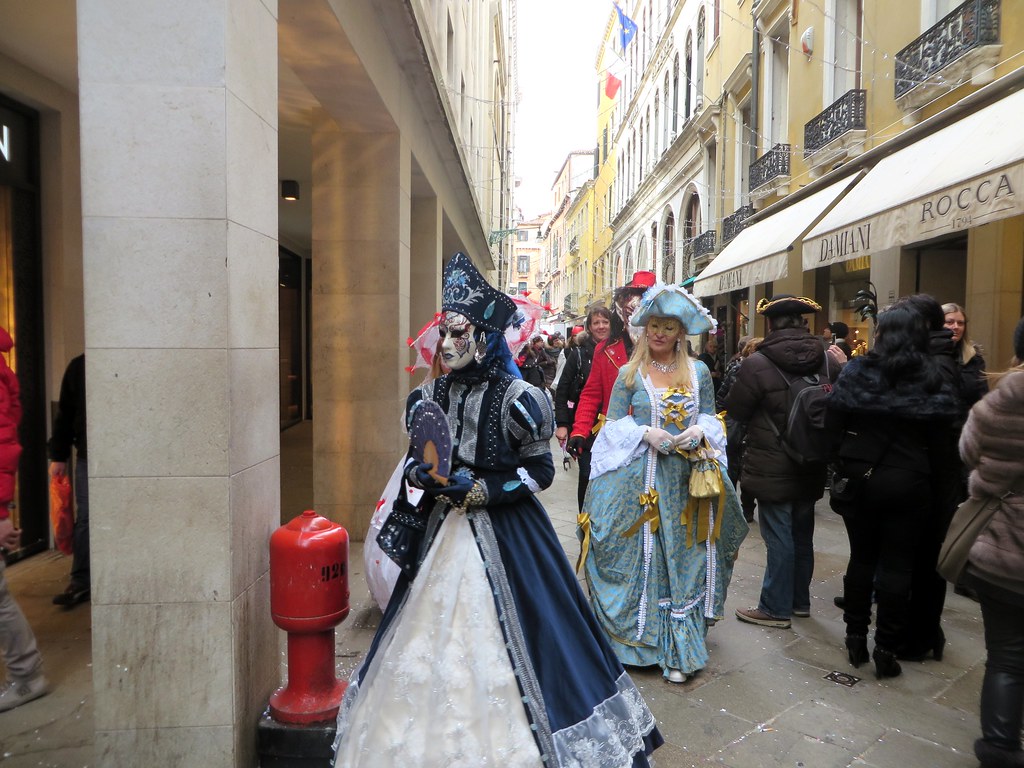 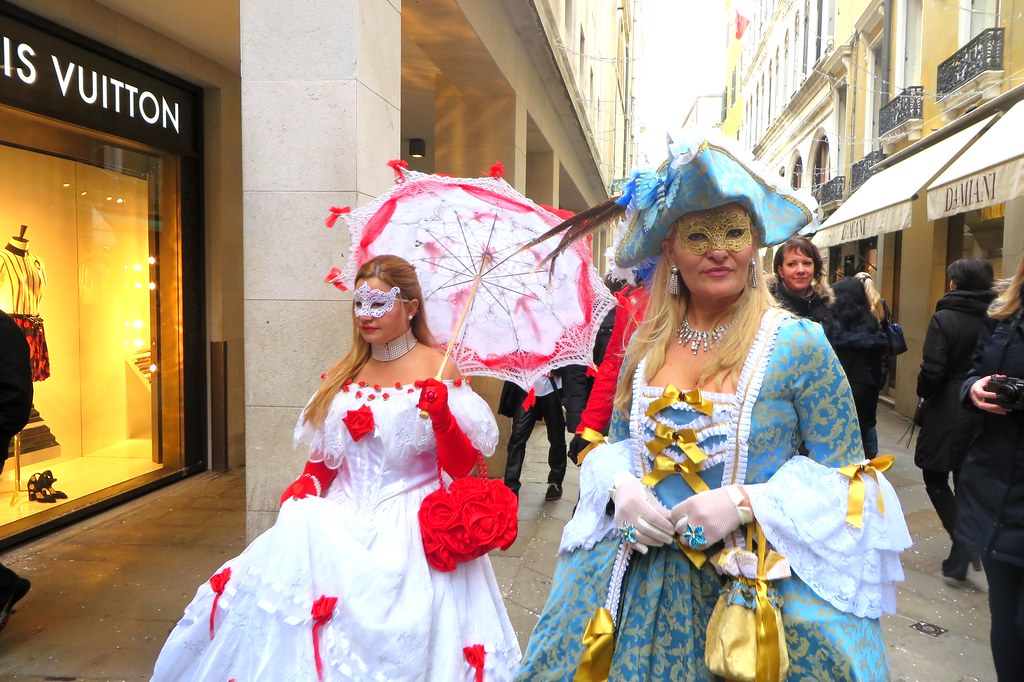 Eating a pizza down by a canal one afternoon 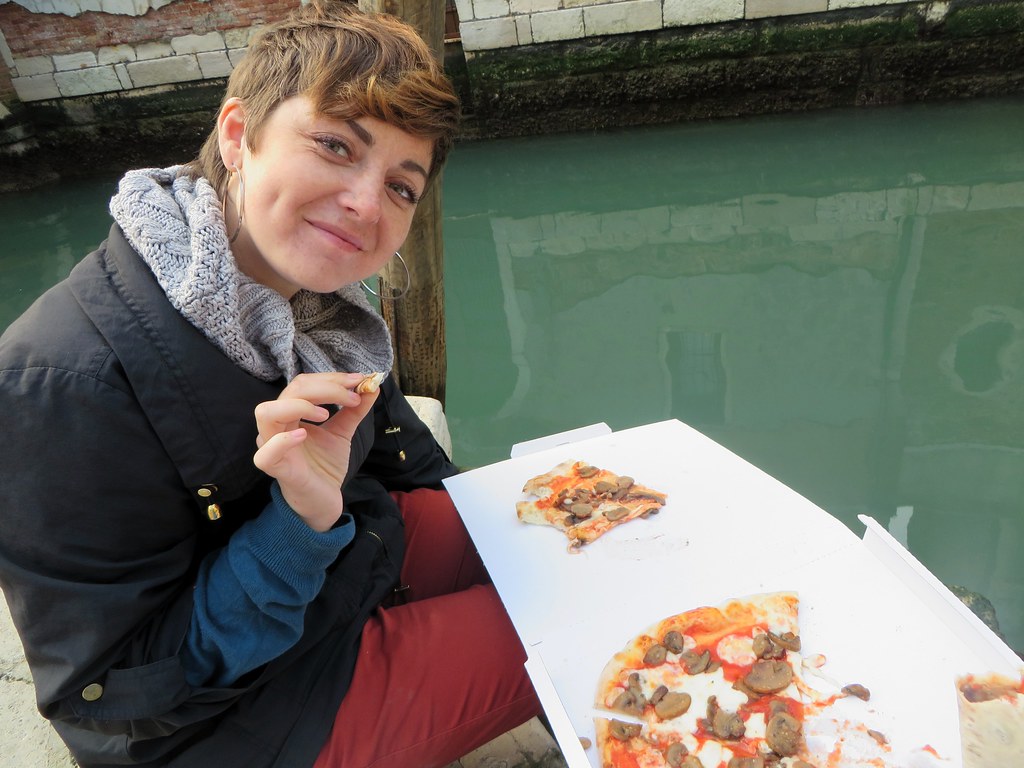 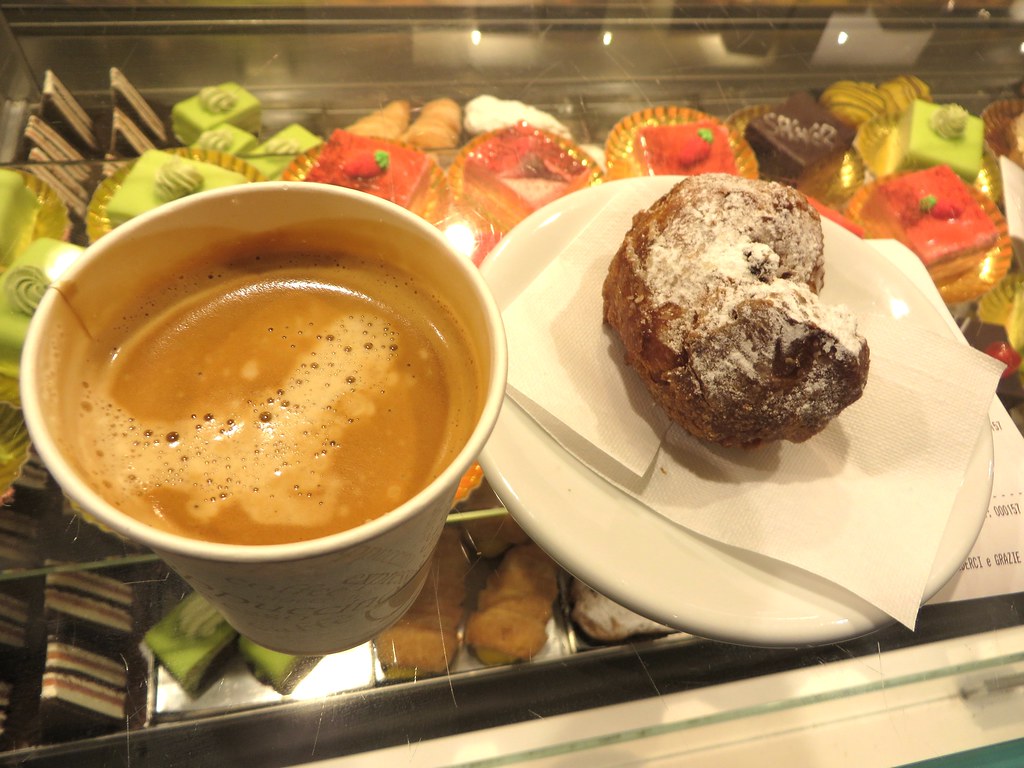 Mulled wine and “spritz” with Campari and dancing to “Uptown Funk” in the city square…
Again, people watching 🙂 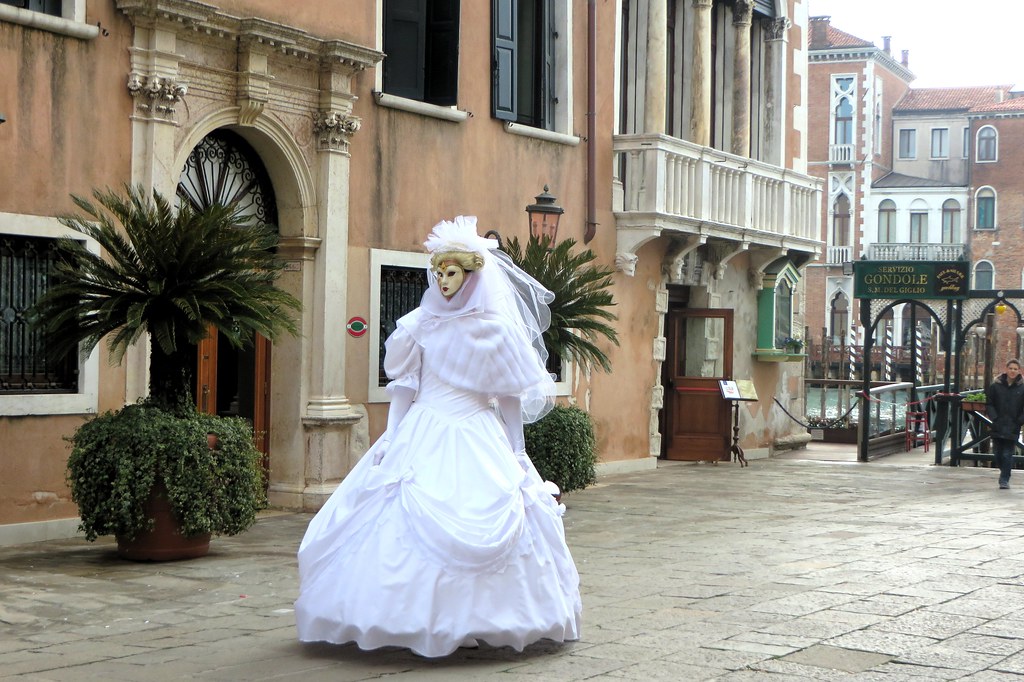 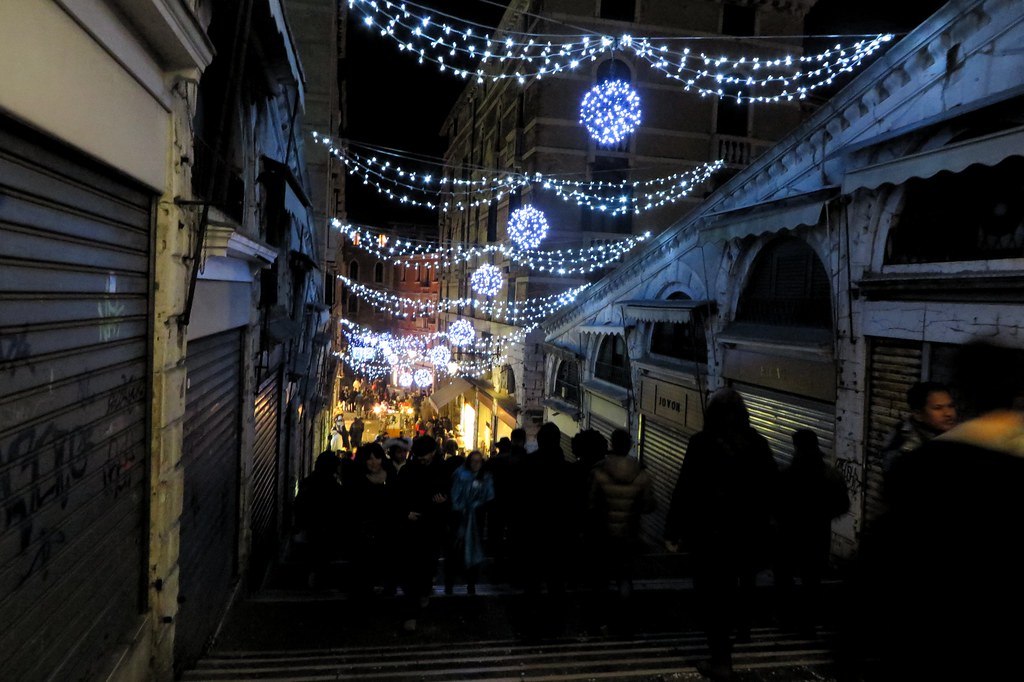 Eating these ridiculously delish fried dough and cheese with (once prosciutto, once with sardines (not intentionally) while walking around partying ourselves to DEATH one night(and buying this REALLY cheap and terrible juice box wine and drinking it.) 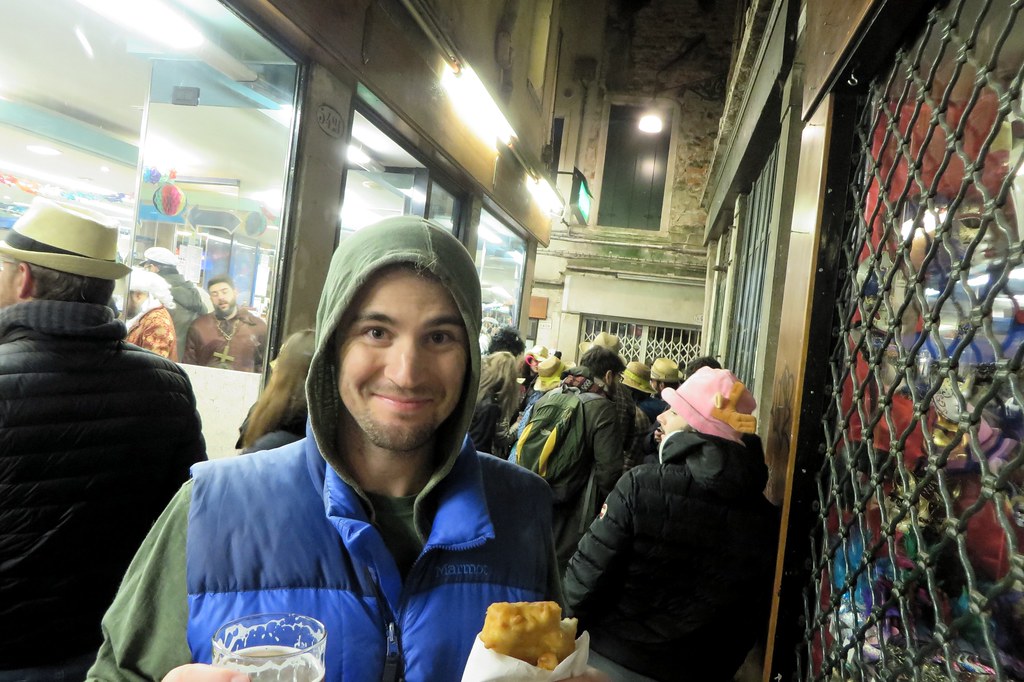 Lindsay also went to a cool church one night for service and had a cool interaction with a tiny, little old man that was apparently like 4′ 6″ (inside the church) 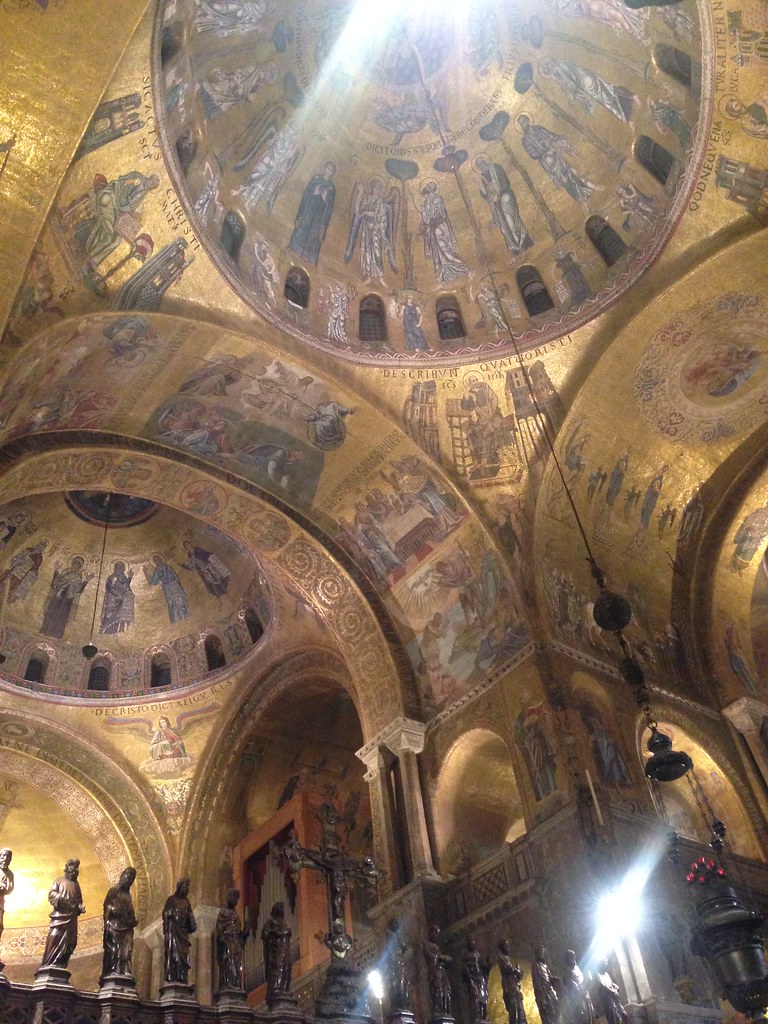 Walking a long ass way to find get to the bus station we were leaving from (like 3-4km through those crazy streets with our packs). Here Lindsay is, stopping for sustenance (espresso + sweet treat) about 1/2 way to where we needed to be… 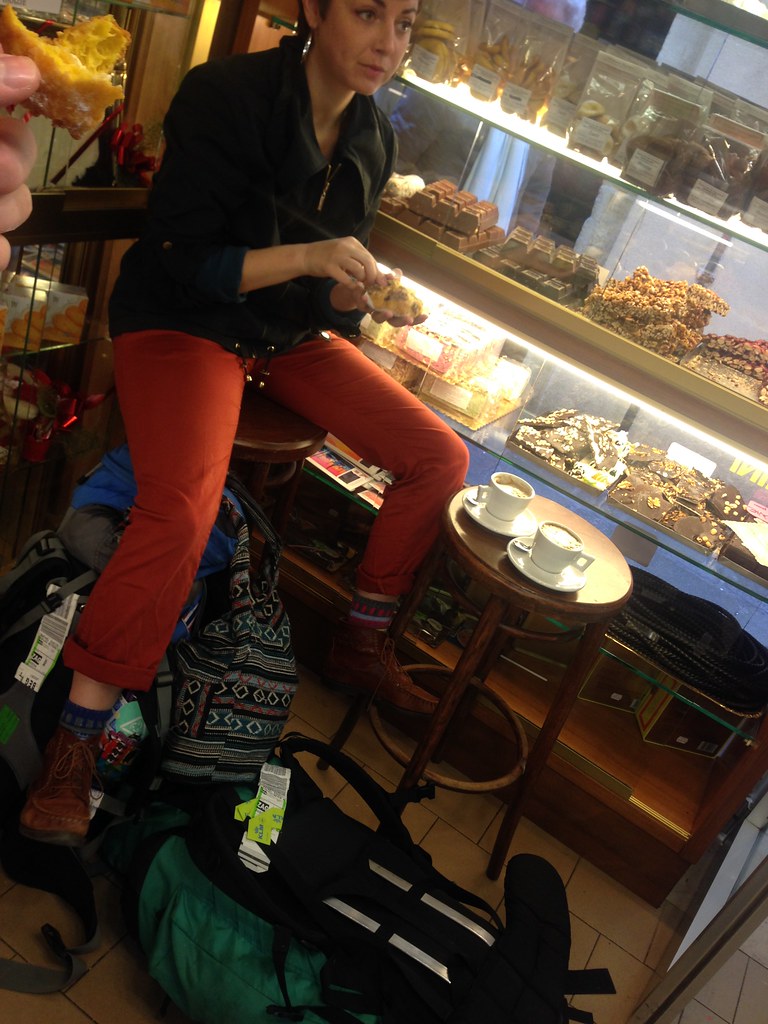 Here I am looking just awesome. 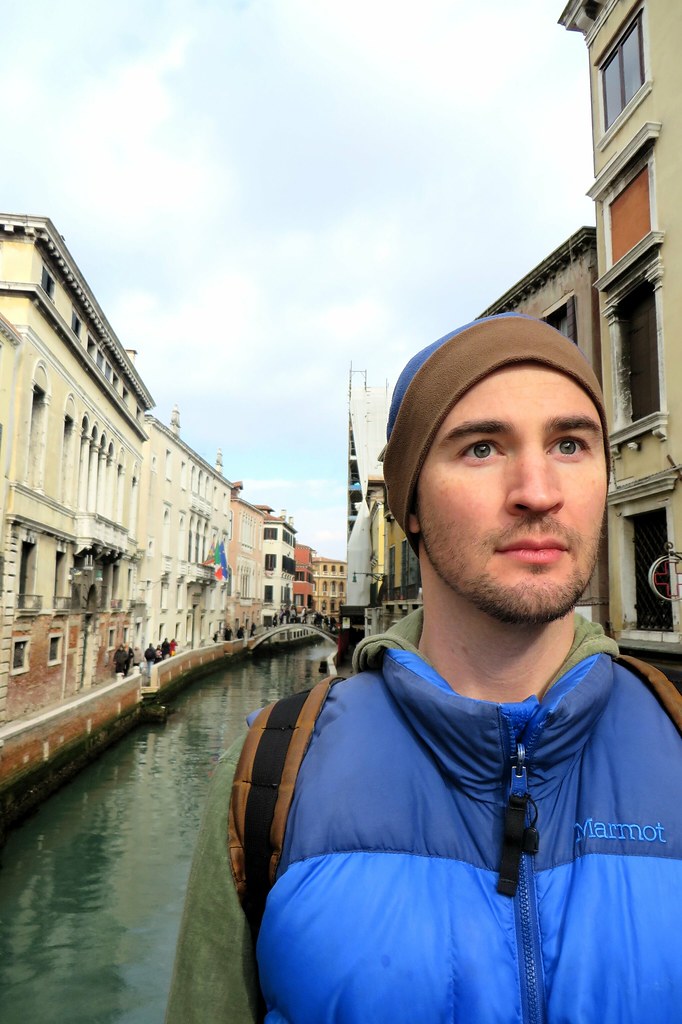 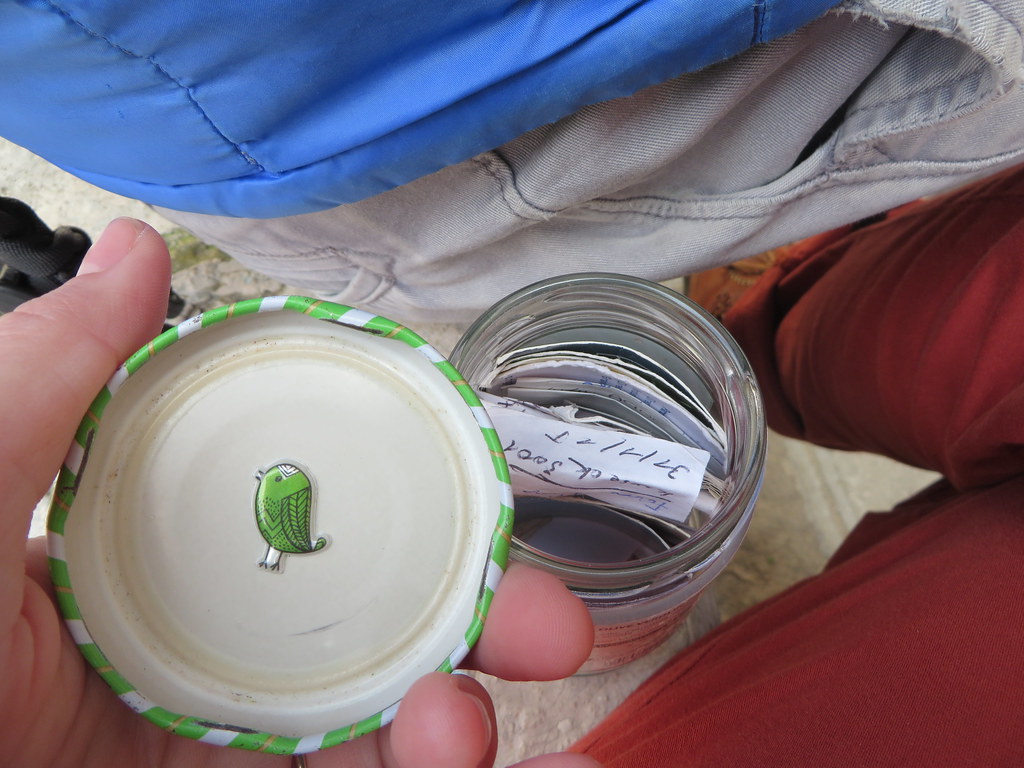 The truth is that most of what we did in Venice is what you’ve likely seen before in photos. The important thing (I think) is to note that Venice completely lived up to my expectations of what Venice is. 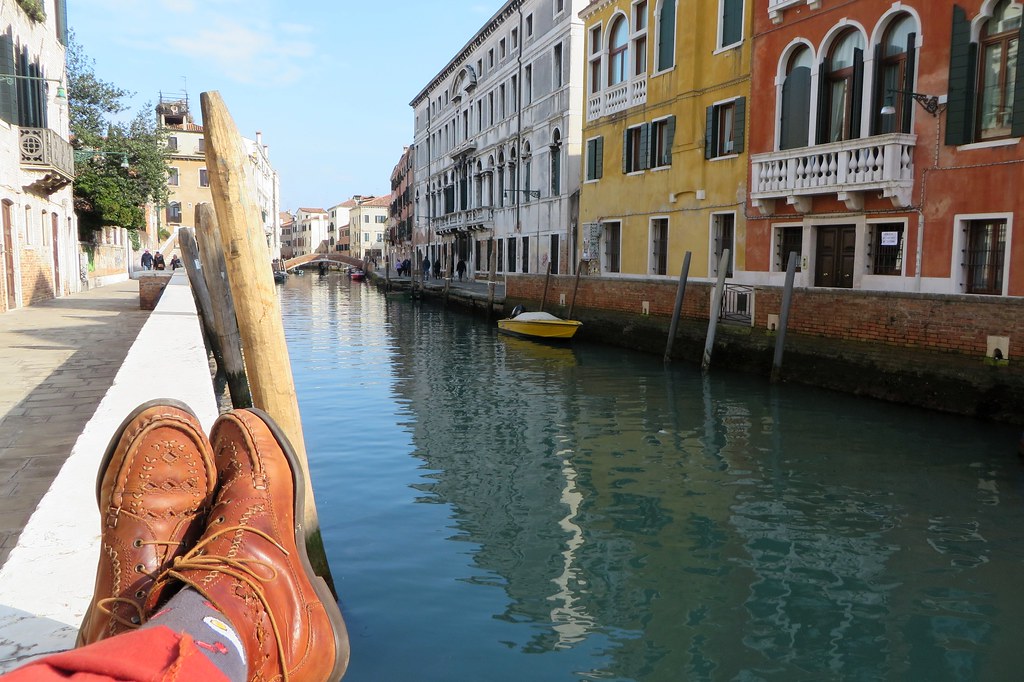 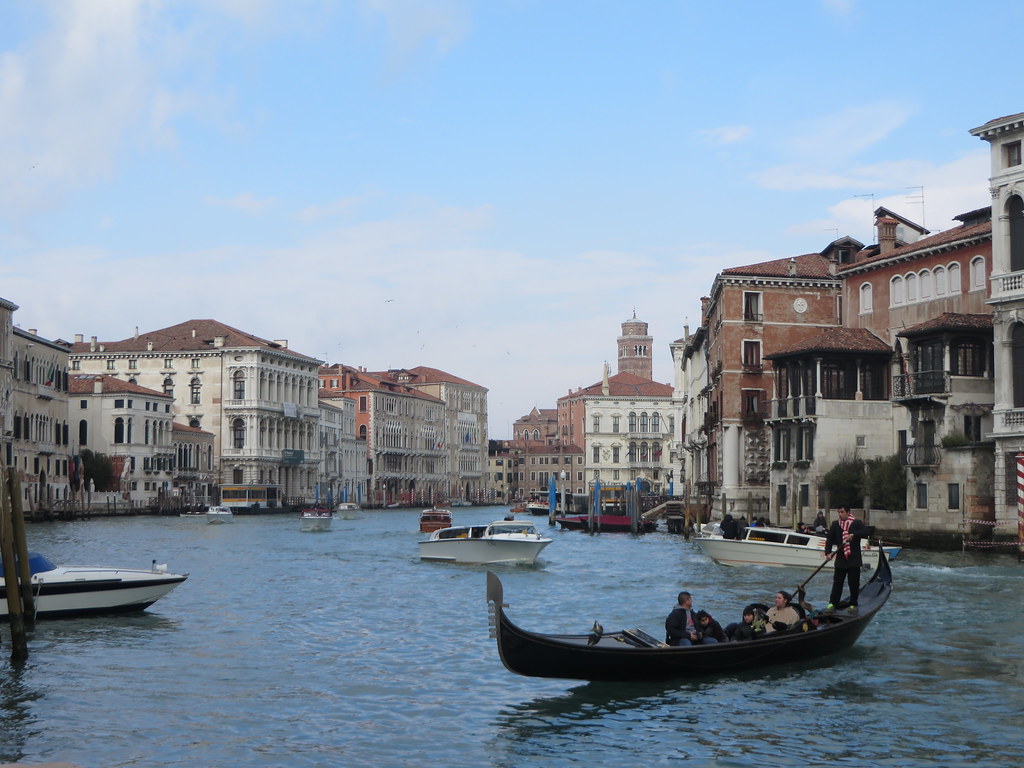 Leaving Venice was a slight pain on account of us having to walk 3ish kilometers from our hotel to the bus station. To make matters worse, on top of being an already (planned) hour early for the bus to make sure we had everything in order when it came, I ended up remembering the ticket time incorrectly and it turned out that we were actually 4 or so hours early. So we spent a long time sitting on the cement reading. Luckily we are no strangers to sitting on the street/sidewalk/dirt/airport/etc for hours, waiting for transportation. At least it was a pretty nice day.