We hadn’t originally planned on visiting Naples. The reason we didn’t plan on visiting Naples is a bit difficult to put my finger on, because like much of our planning on this trip it was very haphazard and semi-random. I guess we had planned on spending more of our time in smaller cities on the coast, and less time in cities. But, after the Amalfi coast (which was amazing, but also wet with few indoor things-to-do that weren’t on the expensive side) we looked at the forecast and saw that it was going to be really raining cats and dogs (not literally cats and dogs) and so figured we’d head to a larger city, Napoli being close and easy to reach, and reasonably famous/well known/worthwhile.

This suited me just fine, because to be honest on our way down to the Amalfi my heart grew sad (not literally) knowing that we were so close to the (arguably not really) birthplace of pizza. Honestly, I was a bit disappointed that I had to say that I skipped over Naples, considering how much I love pizza.

And I love pizza. Along with Ramen, Sushi, and (without getting into specific dishes) Indian food, it’s #1. And this is perfect because in Naples there really is a lot of pizza, everywhere. Actually this is a small problem in the context of this blog post because pretty much the only photos we have from Naples are of Pizza. Here is an example: 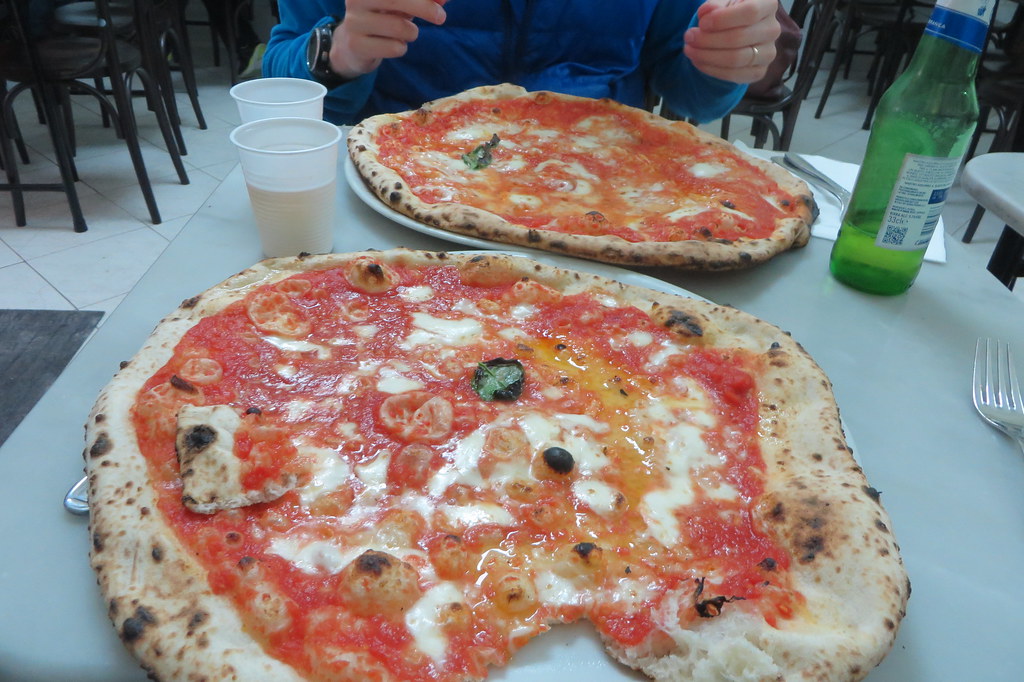 This photo is from L’Antica Pizzeria da Michele – I ate there twice. The first time, I left Lindsay who was feeling sick as a dog (impossible to really know this) instead of comforting her or helping her recover, and it. was. awesome (love you Lindsay, with all my heart (not literally)). I was really really excited because if you google “best pizza naples italy” (you have to add italy or you’ll get Naples Florida results… thanks Obama) this is generally either the top, or one of the top 5.

The pizza here is sort of like a New York style. Thin crust. Crispy. Often you only have two options: margherita or marinara. It’s always cooked in a pizza oven. It’s always great. It’s sometimes more than great.

So, eating pizza is a pretty big part of what we did in Naples. When we weren’t doing that, we were generally sitting in a bar (aka “cafe”) drinking cappuccino or espresso or americano. I have to give Lindsay some real credit for giving espresso a real shot here. She had espresso 3 or 4 (maybe more?) days in a row. 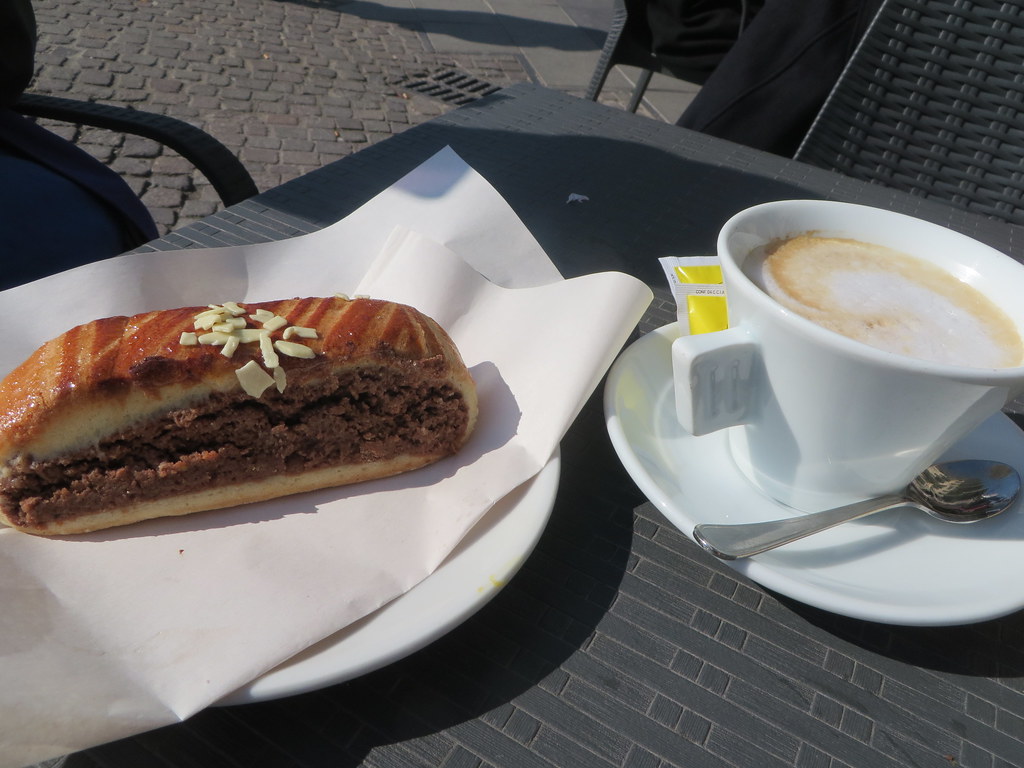 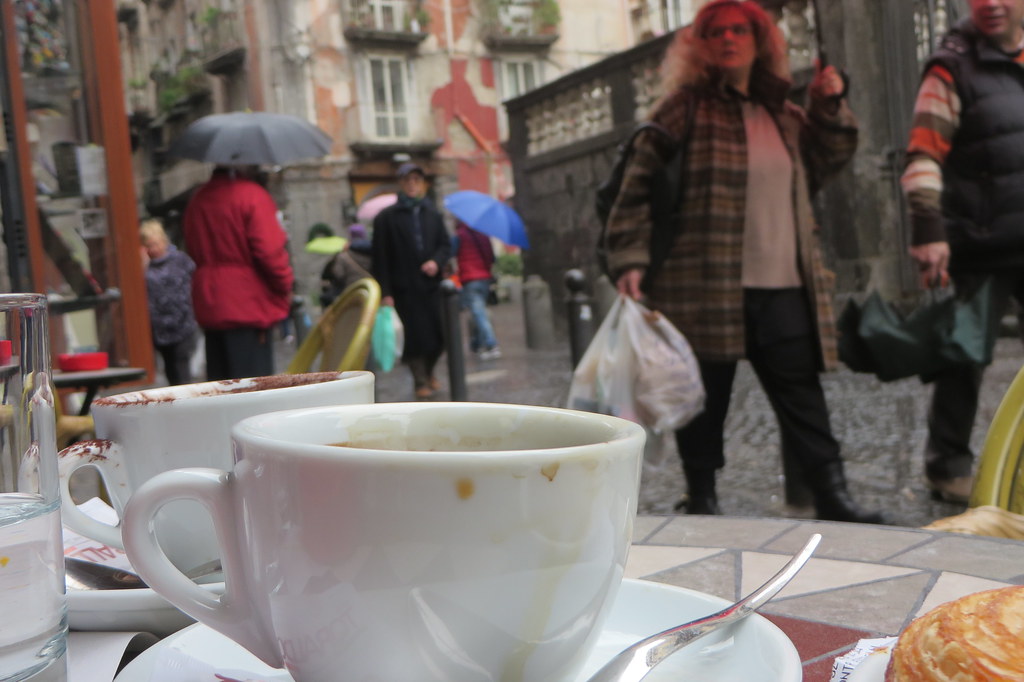 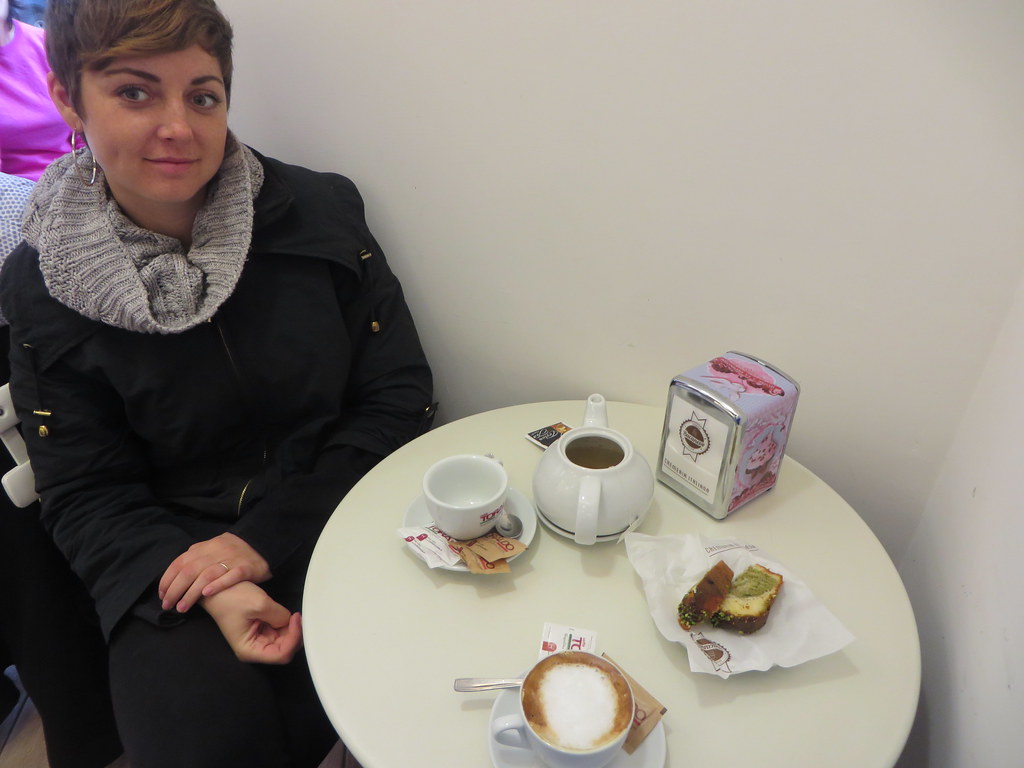 We stayed in a hostel for 3 out of 4 days in Naples, and like many hostels (I hate this, by the way) they kick you out in the morning while they clean. Our hostel kicked us out at 10 am after breakfast. Breakfast, by the way, was some interesting here. I wish I had pictures, but basically it was toast, ultrapasterized milk in a box, cereal, small round dried biscuit things, terrible toast, and GIANT HUGE containers of Nutella. Oh, I sort of found a photo! 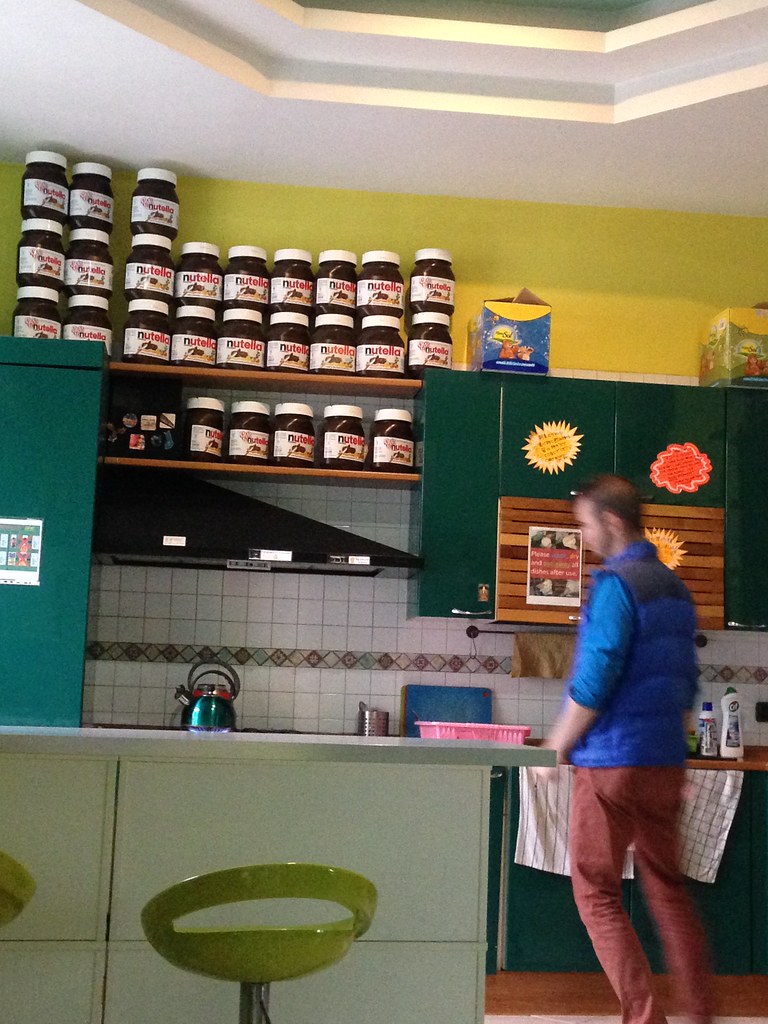 As I was saying, we got kicked out of our hostel every day at 10am. This doesn’t seem particularly early, and it’s not (I’m always up by 8:30, if not earlier. Lindsay is up… early also) but when you are traveling every day, and aren’t planning far ahead, and are trying to not spend a ton of money (which means you can’t just go to museums every day), it is sometimes better for us to hang out in our guest house (reading, writing blog posts, programming, etc) until 11 or 12, then heading out, so we have a really good chunk of time to explore and enjoy the day, but we also get some time at night. Of course, this sounds terrible or really sad perhaps, but it’s just reality – we can’t be tourists 14 hours a day, 7 days a week, for 10 months straight. Anyway, the point of all of this is to say that our normal travel schedule was slightly out of whack in Naples. We left earlier then normal, and we got home earlier then normal. 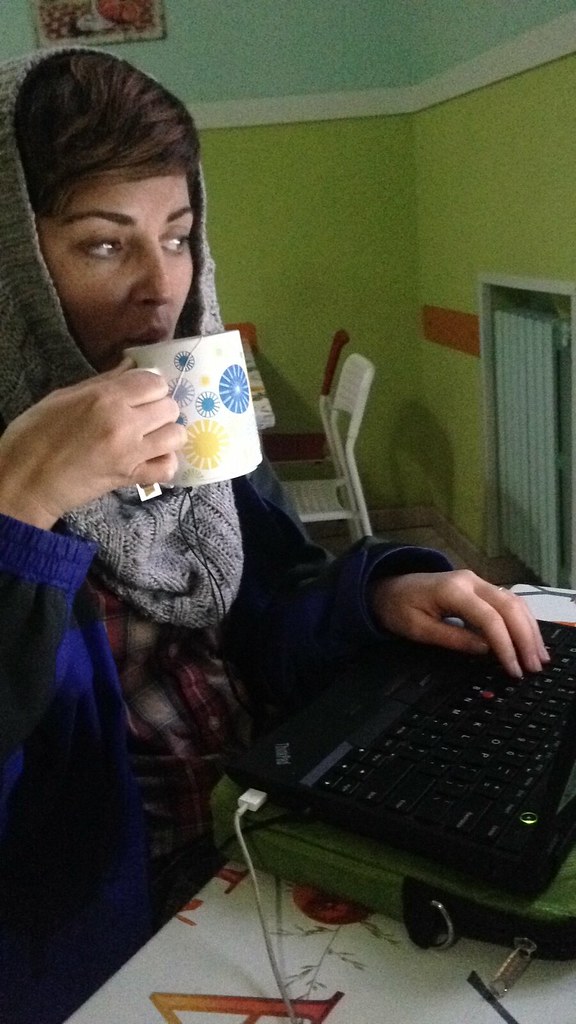 Naples itself is a pretty awesome city I’d say. It’s dirty, there is more dog shit on the streets then any other city we’ve visited in the West, but it’s a really interesting and unique city compared to Rome/Florence/Venice. Of course, each city I just mentioned is unique, but Naples is unique in different ways. It feels a lot grittier and dirtier and generally more multi-cultural. For us Naples felt totally safe, but some people (who I suspect are perhaps not used to living in a city or being around a real mix of people) call it “dangerous.” I will admit there were a number of shady sorts of places, and I was a bit more cautious of where I put my money in some areas, but really it was pretty great.

Another thing that I really loved about Naples is that a few streets had a sort of “I bet this is what Italy felt like 60 years ago” feel to it. Once again, I wish I had more photos, but there were a few streets where people were selling vegetables in the back of oldish/beatupish trucks. Stuff like this. This photo doesn’t do it justice, but sort of gives the idea: 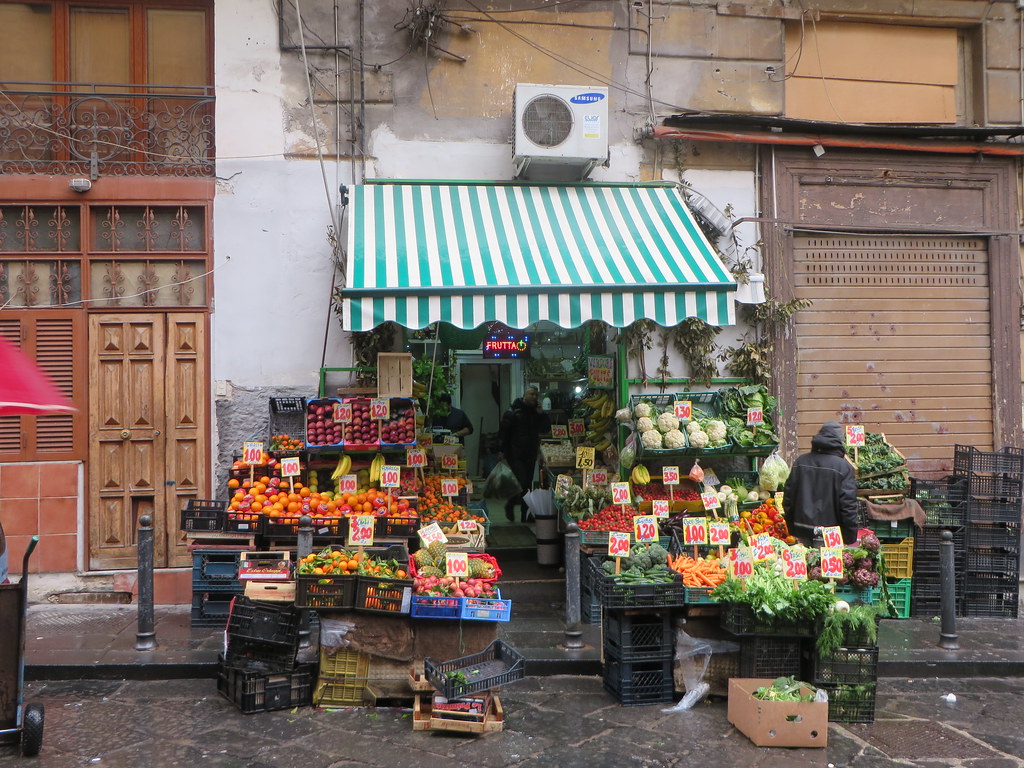 Actually, I scanned a bunch of slides (film) (I may have posted some of them on this blog before) that I found at an estate sale back in Berkeley a few years ago, and there were a bunch of photos from what I believe is Italy. These photos are very similar how these streets of Naples felt like to me. Again, the photo we took (above) isn’t from this street, but you can perhaps sort-a-kinda get the idea. I have no idea if these photos below are actually from Naples or not, but again, the feeling was similar to me. 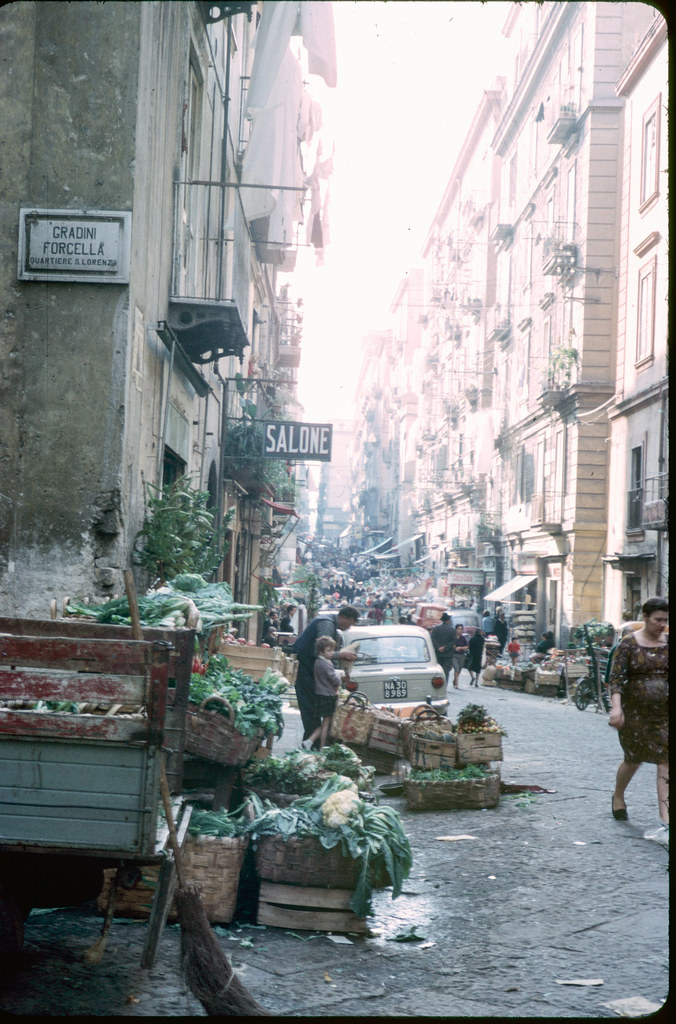 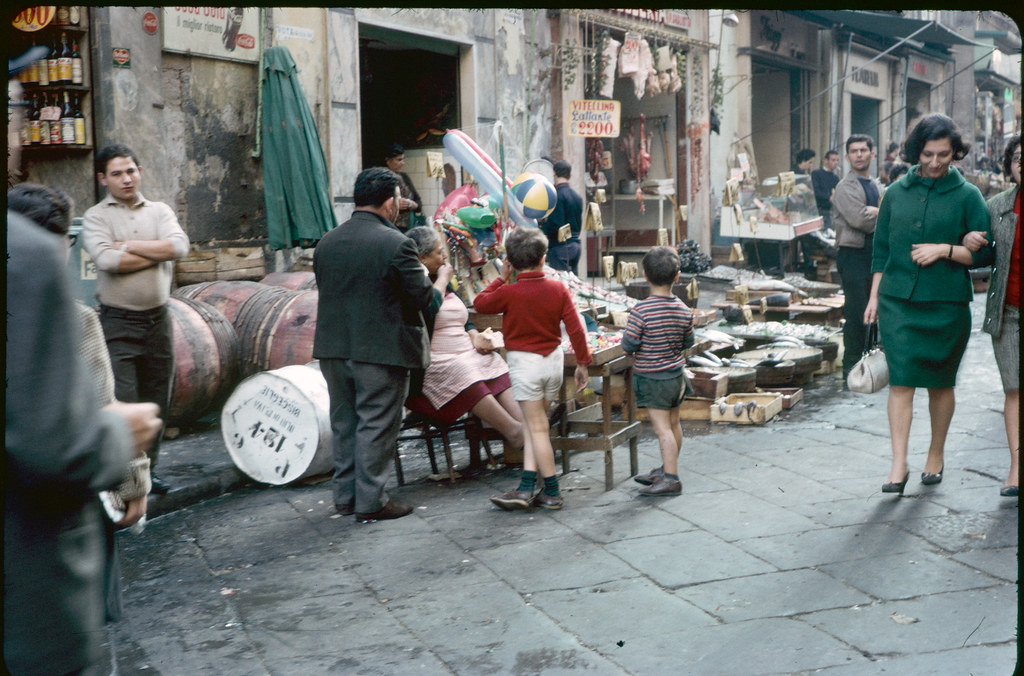 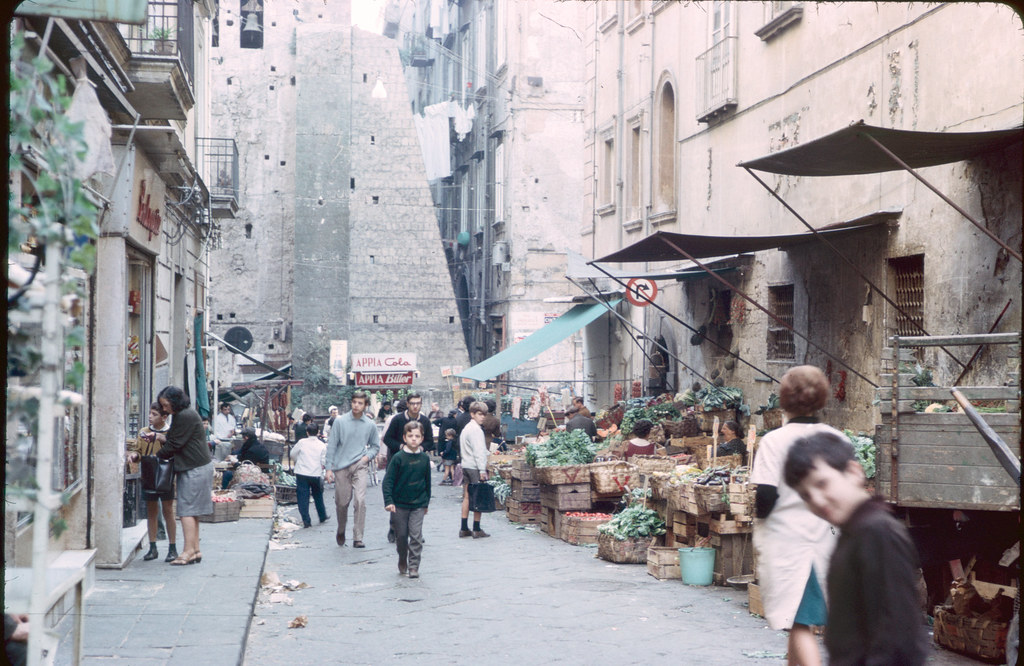 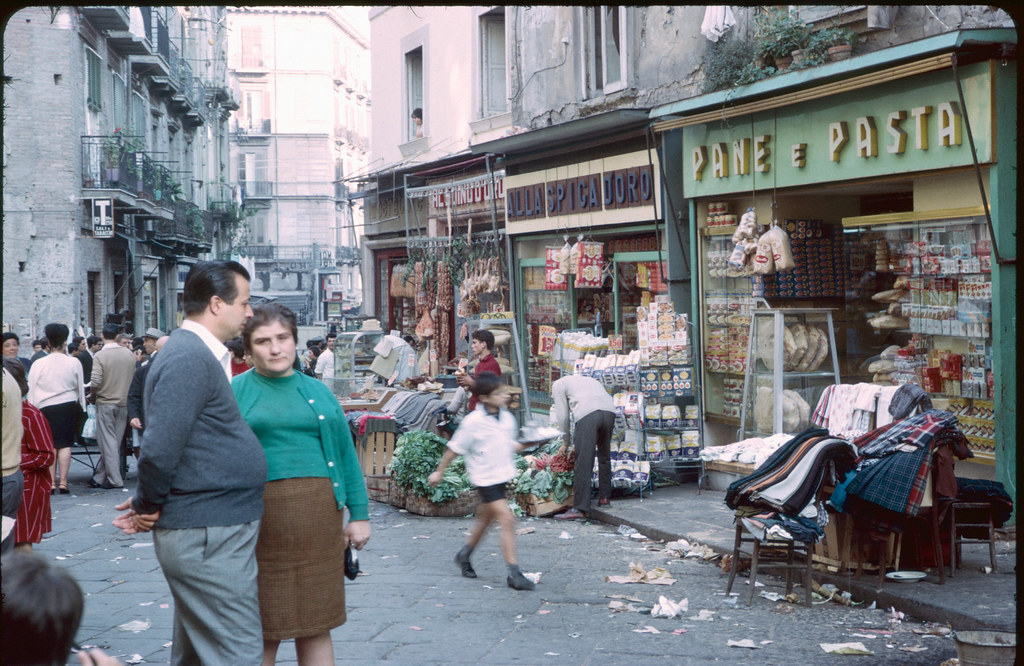 We ended up spending 4 days in Naples because we found a good deal on a train to our next destination (Reggio Calabria) that required we stay there 4 days. Quite honestly, it was probably a day or two too many, considering we didn’t really DO anything in Naples. We didn’t go Pompeii (though we drove by Mount Vesuvius like 15 times going between Amalfi and Naples and ride sharing and etc), we didn’t go to a single museum (honestly we just didn’t feel like it), we mainly at pizza, walked around and people watched, ate at cafes, talked with people at our hostel, and hung out. 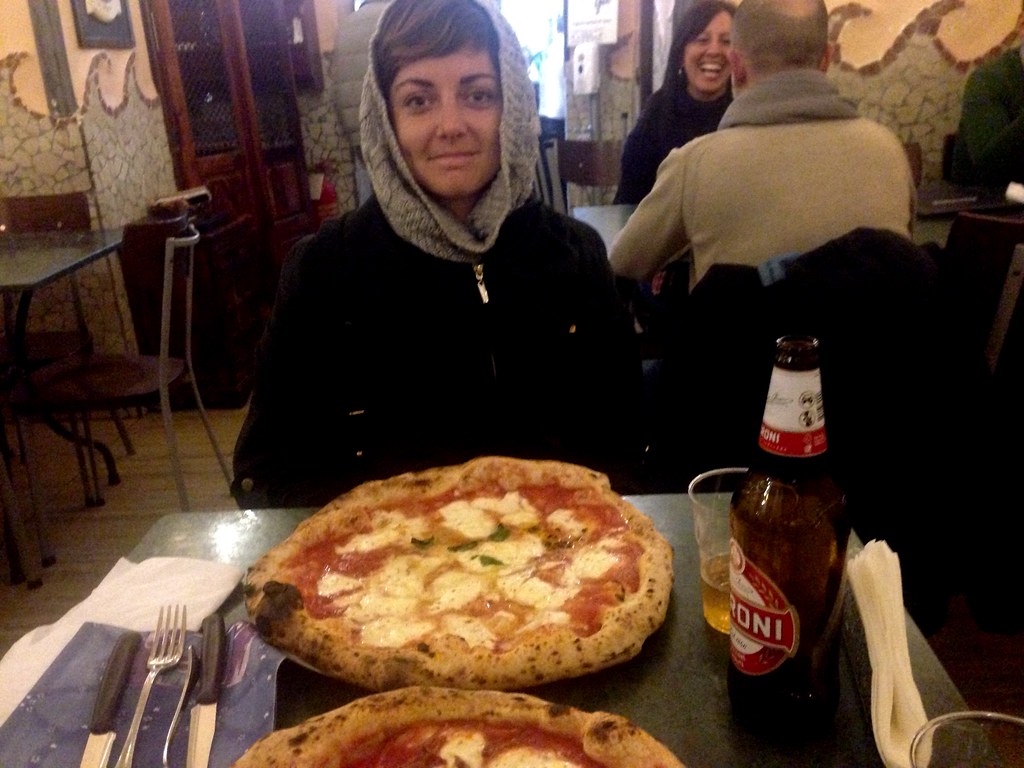 One other highlight was cooking. One night Lindsay and I (more I then Lindsay, but she was working on planning the next phase of our trip!) made “traditional” bolognese sauce (like we learned in our class!). It was pretty good, and I’d say fun to do. There was an AMAZING grocery store (sort of like in Rome, but a bit fancier) and we went there twice to look around and buy food for cooking/eating. They had these cured legs of various animals that you could buy that were stored in what looked like a fancy soft guitar case. (Photos to come, I hope, if I can find them).

For the sake of documentation, the fourth night we ended up having to sleep in a different hotel. It was the hostel owners “cousin” (when I hear this I generally think, “yeah right” because in India and many other places with touts you hear this constantly, “oh please visit my brothers shop” “oh my cousin has a shop next door with great prices” “oh let me show you my mothers shop”, etc). It actually may have been the cousin, but regardless it was in a pretty shady area of town. And the hotel itself was a bit on the “prostitutes come here” side of things. But honestly, that’s not fair, because the place was actually totally fine. If you haven’t spend the last 8 months traveling or camping or doing something similar, then you might say it was a bit rundown or perhaps grimy, but the sheets felt clean enough to me, and the towels, while grey and dingy, smelled clean enough. Bonus: the rooms had themes, like the America Room with a mural of native americans. Etc. Our room, sadly, seemed theme-less. Though we did have a reasonably nice balcony, and there was an amazing pizza place nearby! 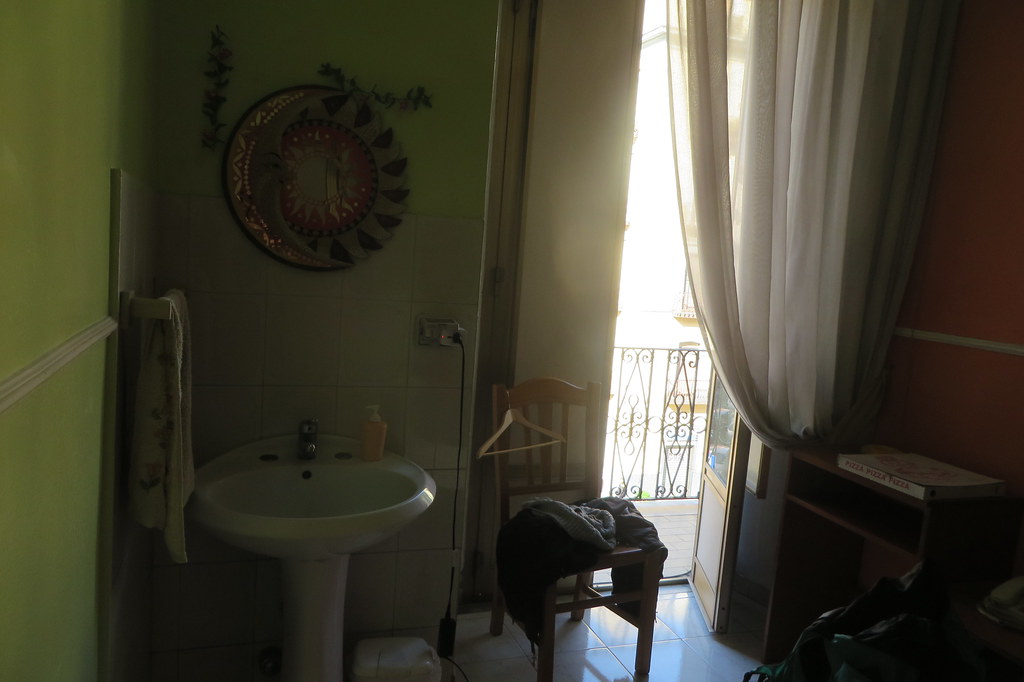 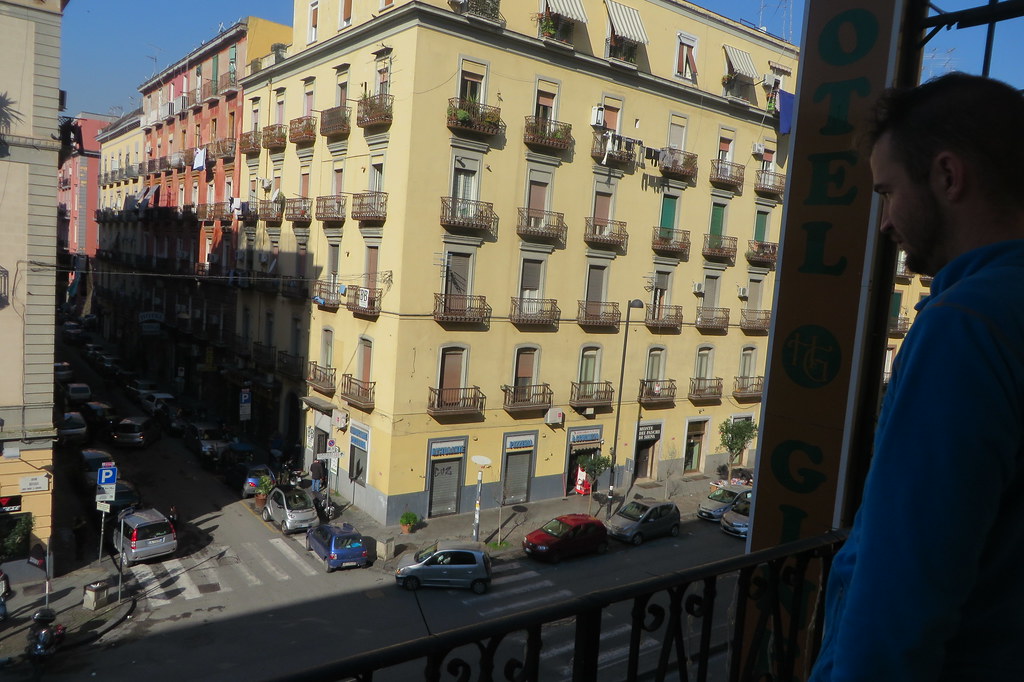 We ate pizza in Naples literally until the last minute. We ate pizza from Naples as we left Naples, on the train. Here Lindsay is standing with a pizza waiting for the train to Reggio Calabria. 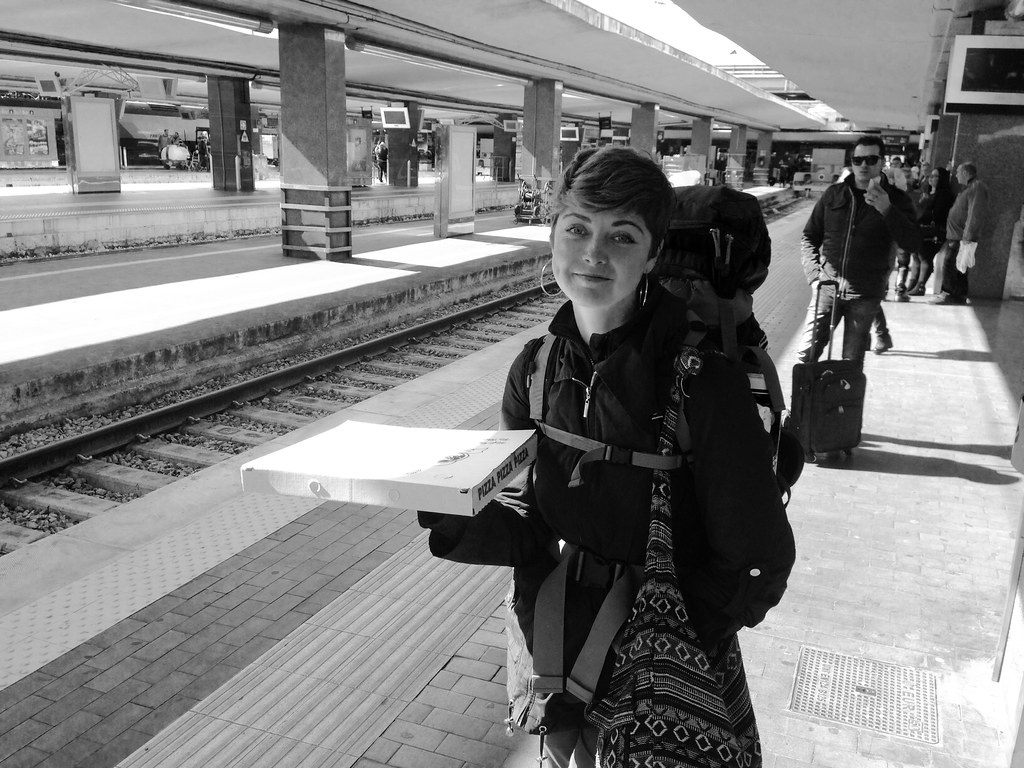