So, needless to say, we were pretty excited that my parents were coming to visit. We ended up coming in to Lisbon via bus around 11pm the night before their arrival, and were picked up by the world’s most hospitable host (yet another Airbnb success story). Right off the bat, we were feeling quite spoiled, as it has not been the norm for us to have someone PICK US UP from anywhere, let alone in a car. Normally we’d be dealing with following our GPS god-knows-where and walking normally 1-4ish km from our stop to our place with our packs in whatever city it was that we happened to land. The fact that we had a real, live person meeting us to ease our transition into Lisbon was pretty damn awesome to say the least, especially after the 8+ hour bus ride in the back of a giant, bumpy bus with no air. On top of him being just a really wonderfully warm person, he also bought us dinner after explaining that he remembered “how difficult it was, traveling in the past, when [you’d] get somewhere late, and were starving and everything was closed…. ” Honestly, if there could have been a more perfect way to enter a new city, bellies full, warmed with the kindness of this man who we were only paying $22 per night to stay with, well, I don’t know what it would have looked like other than this.

We fell asleep around 1 and woke up early to walk a few miles to the metro to buy cheaper public transit fares for my parents when we planned to pick them up from the airport later that afternoon. Walking back, we stopped at this great little coffee shop on the corner which only sat about 4 people, and fumbled through various greetings and pleasantries with the guy behind the counter. Shaky hands, and caffeine ripping through our veins, we headed back, packed up our stuff and walked a few kms up some ridiculous hills in the heat to find our bus to take us to the place we’d be staying at for the next 3 days.

Hopping off the bus, we were pretty excited about the neighborhood. We stayed in Barrio Alto, known for it’s music and late-night party scene (not that we did much of that :)), which was full of cobbled streets, street musicians and great pasties de nata (local sweet treat) shops galore. We walked down the street, took in the beauty of the city, and stopped by a diner on the corner where we had a few beers (at like 10 am) and ate some grub. The sun was shining and it was hot and the beers, despite the hour, hit the spot. Shortly after, we hopped on the metro, and headed for the airport!

After picking up my parents, the rest of the day was kind of a blur. We hopped back on the metro for home and climbed the 4 flights of stairs carrying their bags, and enjoyed a few small treats (Palm Sunday baskets, we called them :)), we had brought for them from Italy, France and Spain. They were exhausted and jet-lagged, and while they tried their best to stay awake, they cashed out for a few hours. When they woke up, the sun had set, but we walked around and checked out the neighborhood. We had dinner (me, squid, Dad – octopus, Mom and kKev – cod) and tried the cherry ginja (a Portuguese liquor made by infusing ginja berries in alcohol and adding sugar) from chocolate cups, and came back to watch/listen to Kyle’s basketball game, as his Godwin students were playing for the finals. After their big win, we all went to bed for the night. 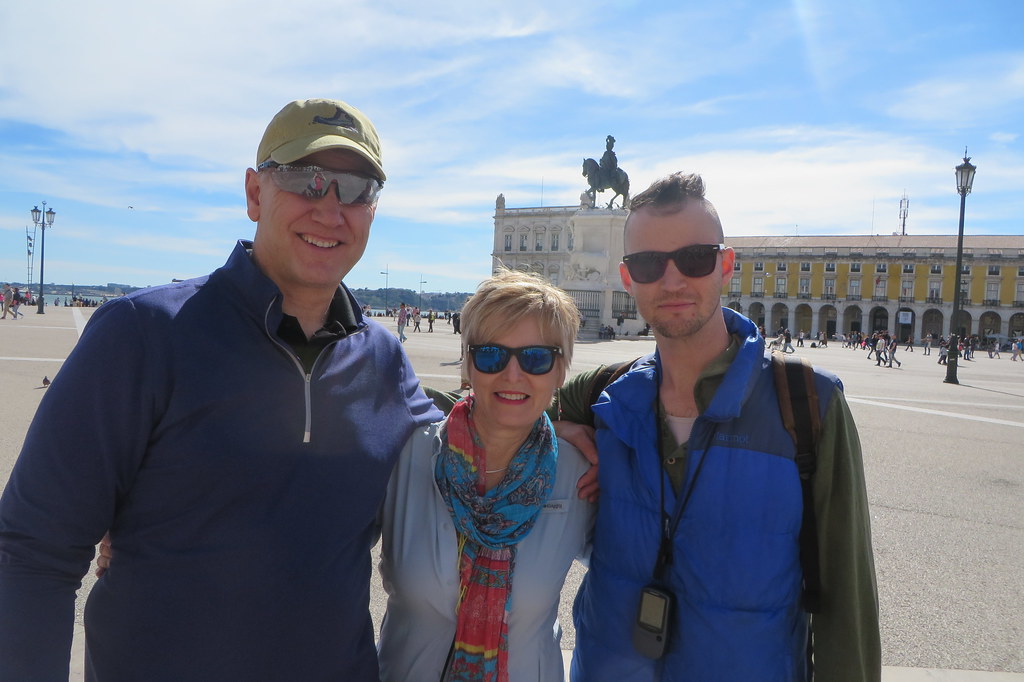 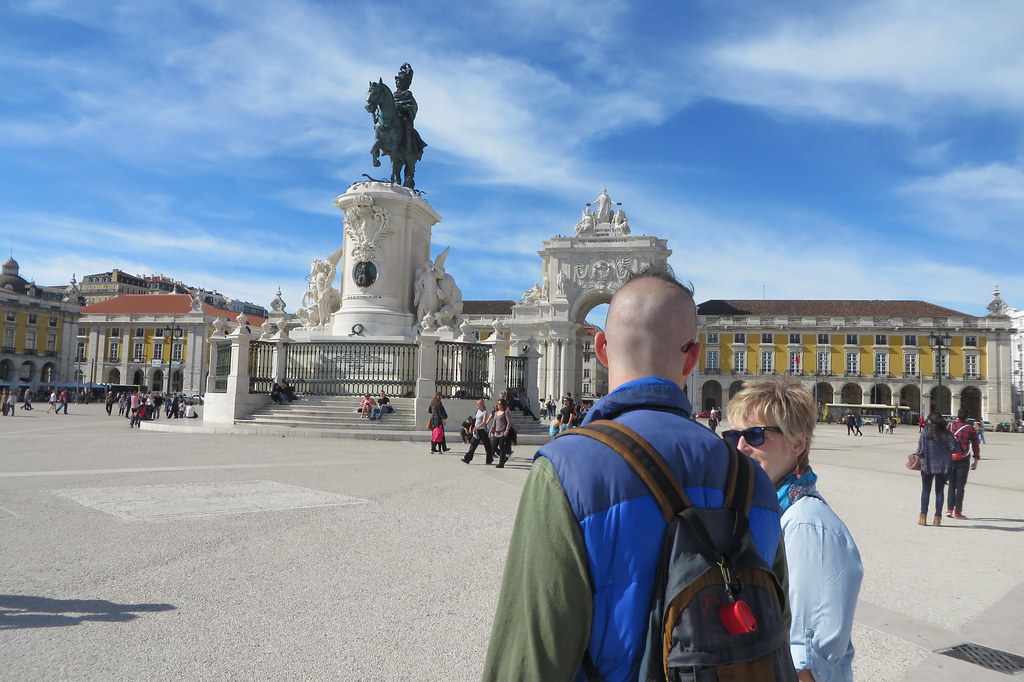 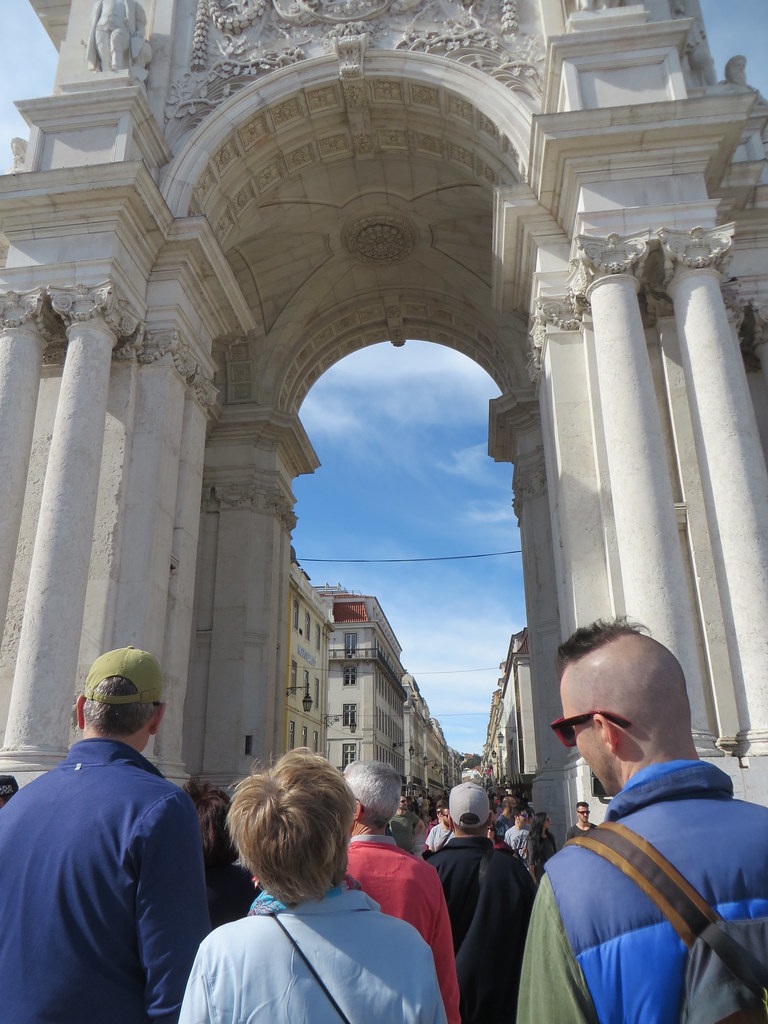 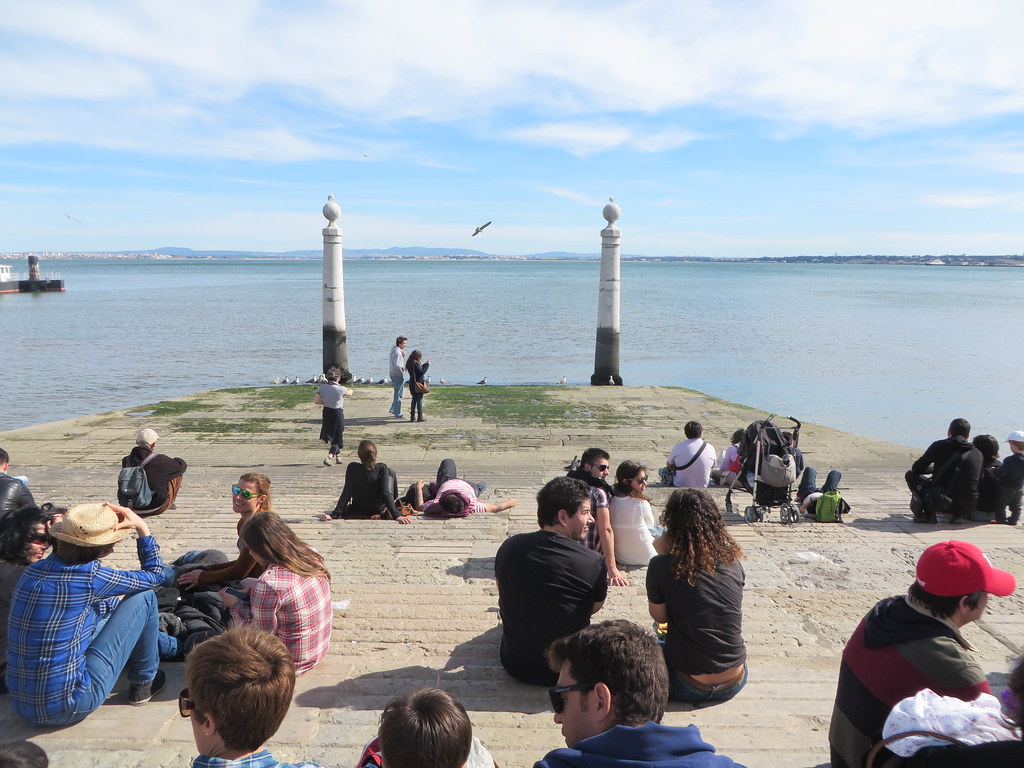 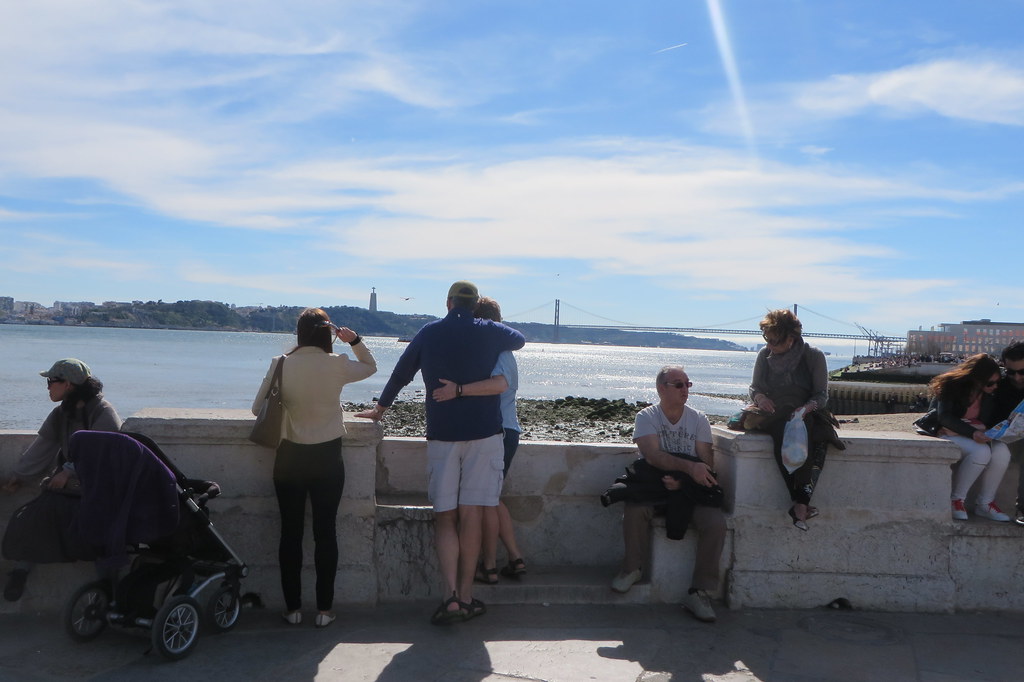 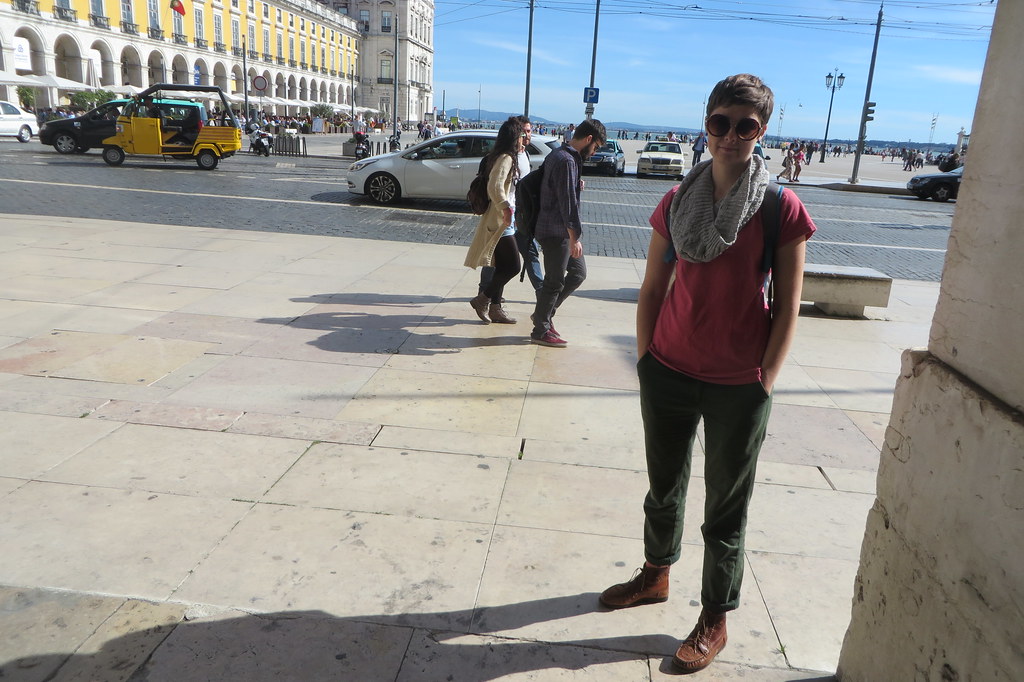 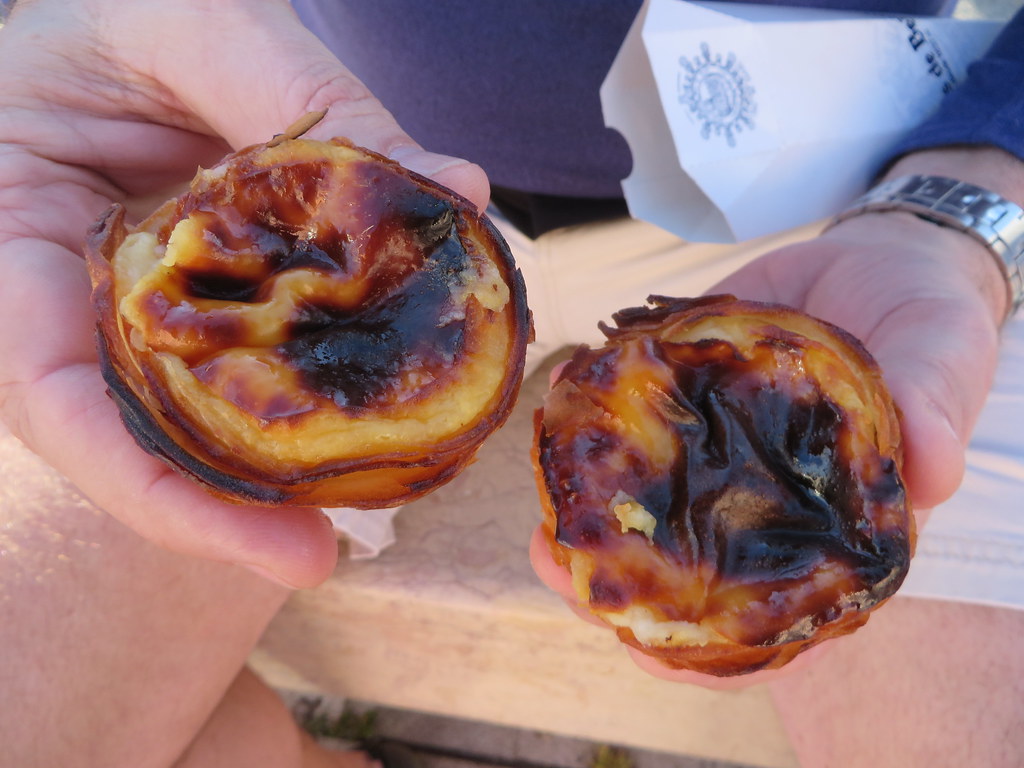 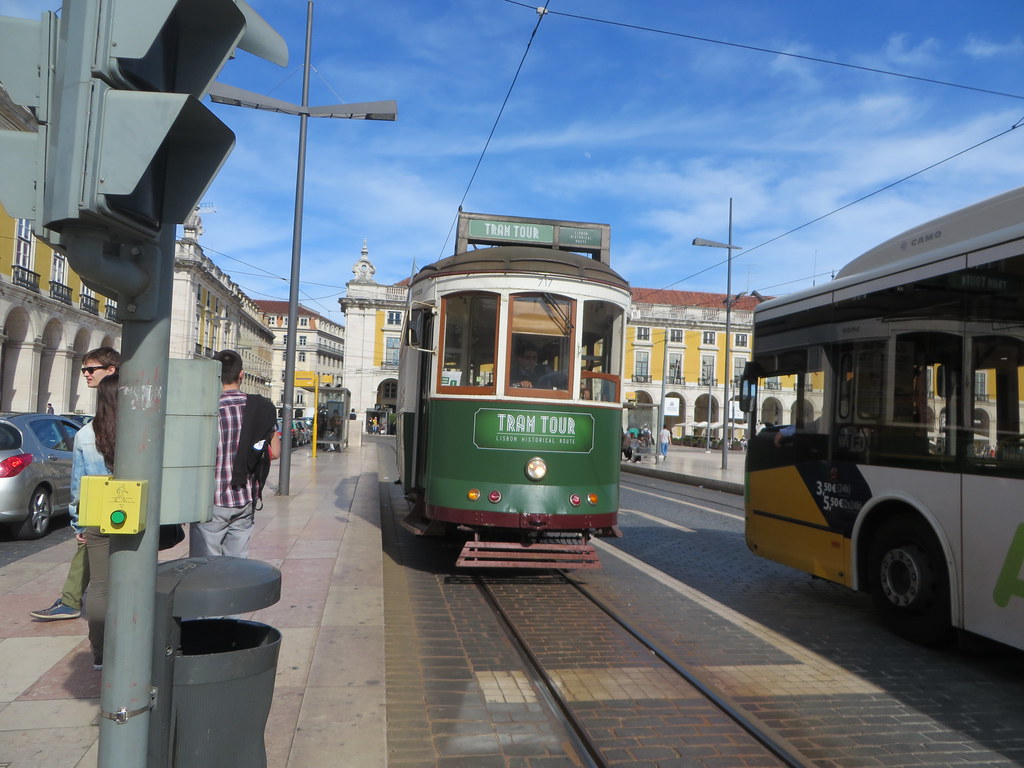 The streets all over Portugal were paved in this insanely awesome black/white patterned cobblestone. The patterns changed, but the beauty never did. My mom was especially impressed by this, and decided she wanted her own piece to take home, as you can see below. 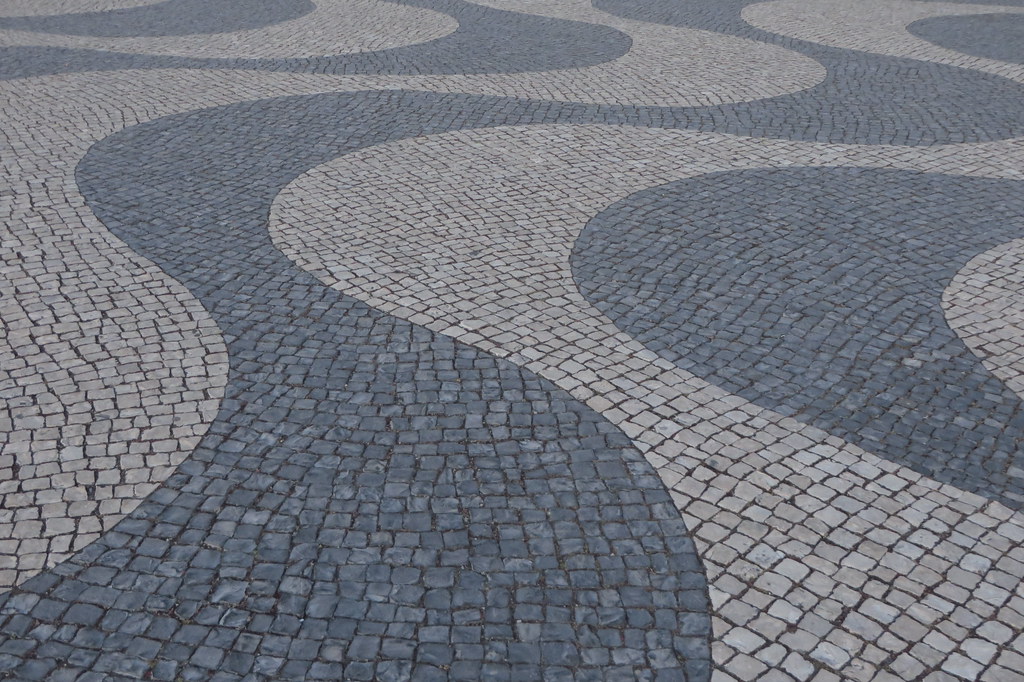 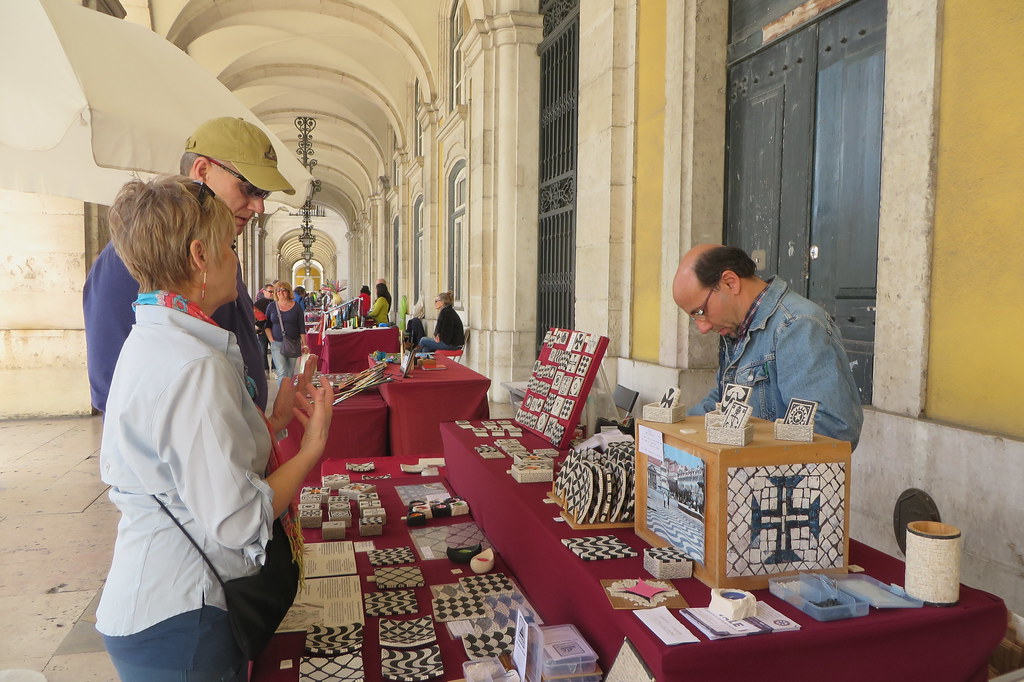 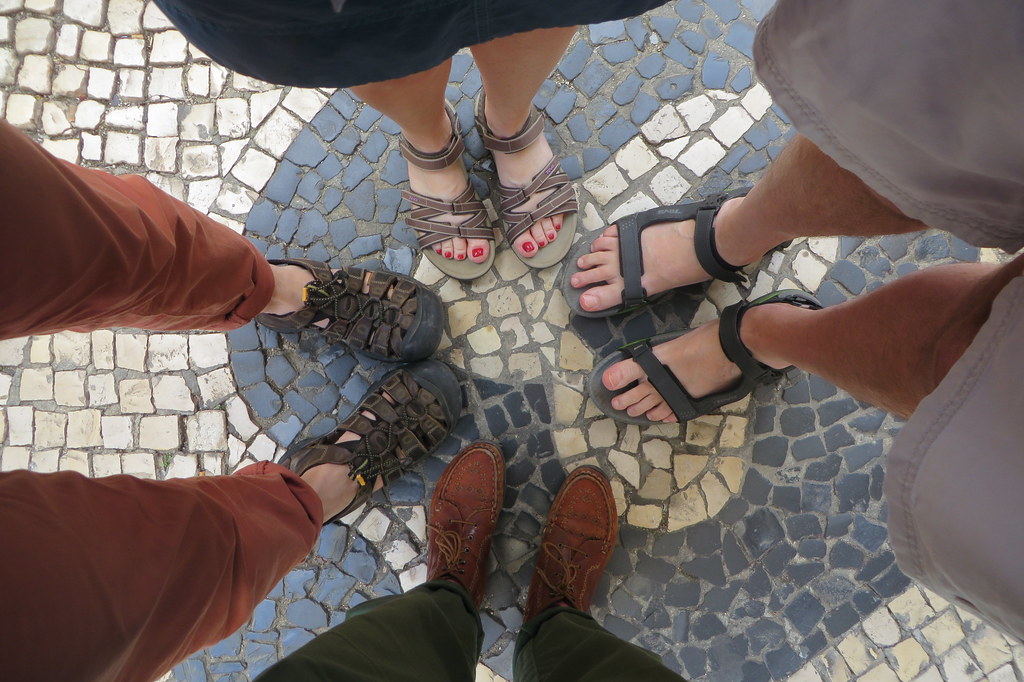 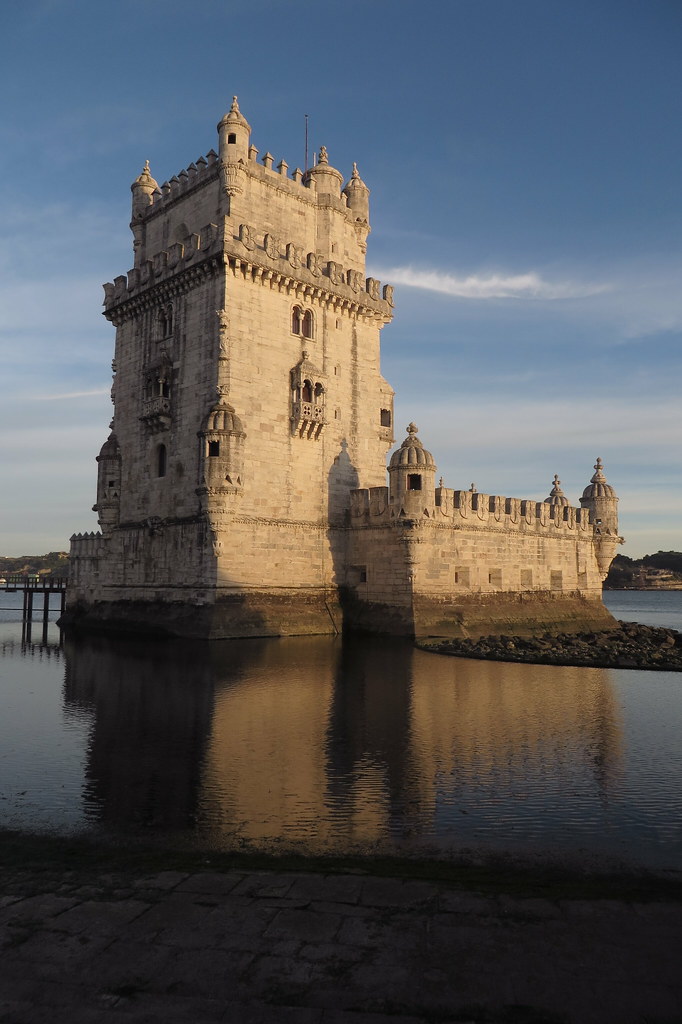 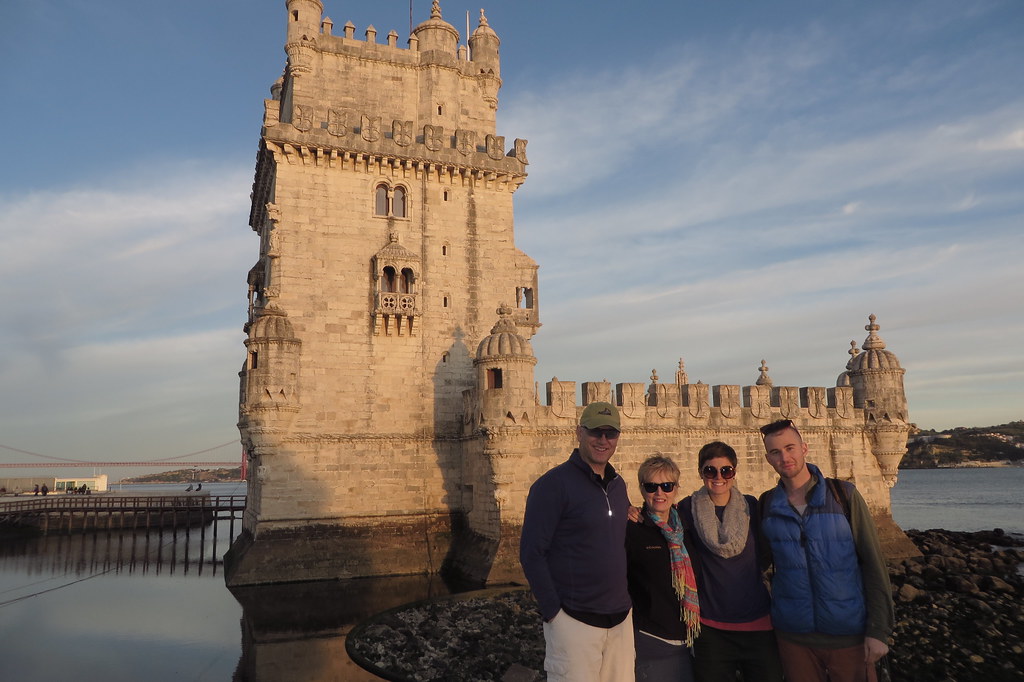 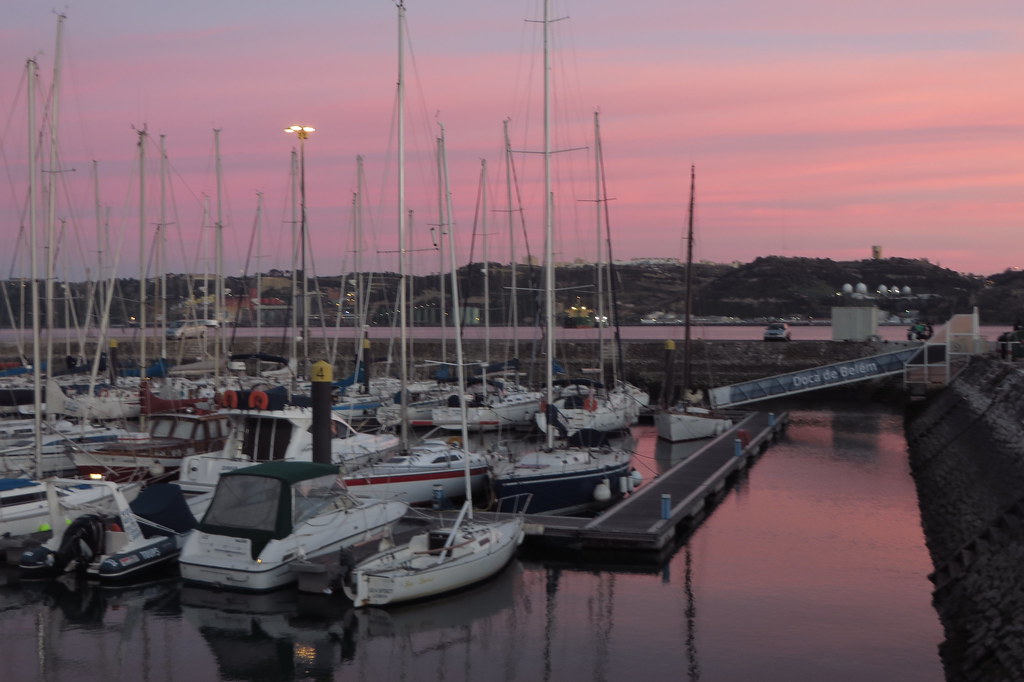 Day 2, my parents did a tour with “We Hate Tourism, Tours” and met these great people from Germany who were in Portugal because they were planning a bike trip from the south of Portugal into Spain. My parents really hit it off with them, and we randomly ended up meeting them at this really cool little brothel-turned-bar for fancy gin and tonics and “green wine”  – another Portugal specialty. After our drinks we headed to this great tapas bar where it just so happened there was a Poetry slam – so we sat, not understanding a word – listening as person after person poured their hearts out on stage. It was a pretty cool experience. I don’t have any pics of either thing, but was definitely a night to remember.

On our last day, we walked around a few more neighborhoods, ate bifana sandwiches and just enjoyed Lisbon. 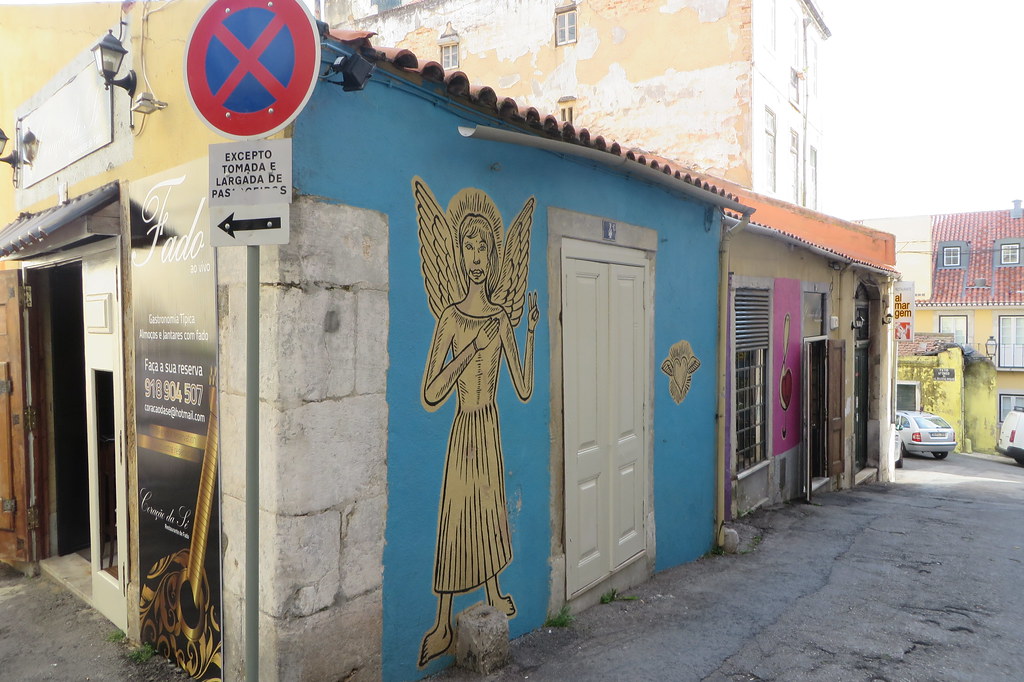 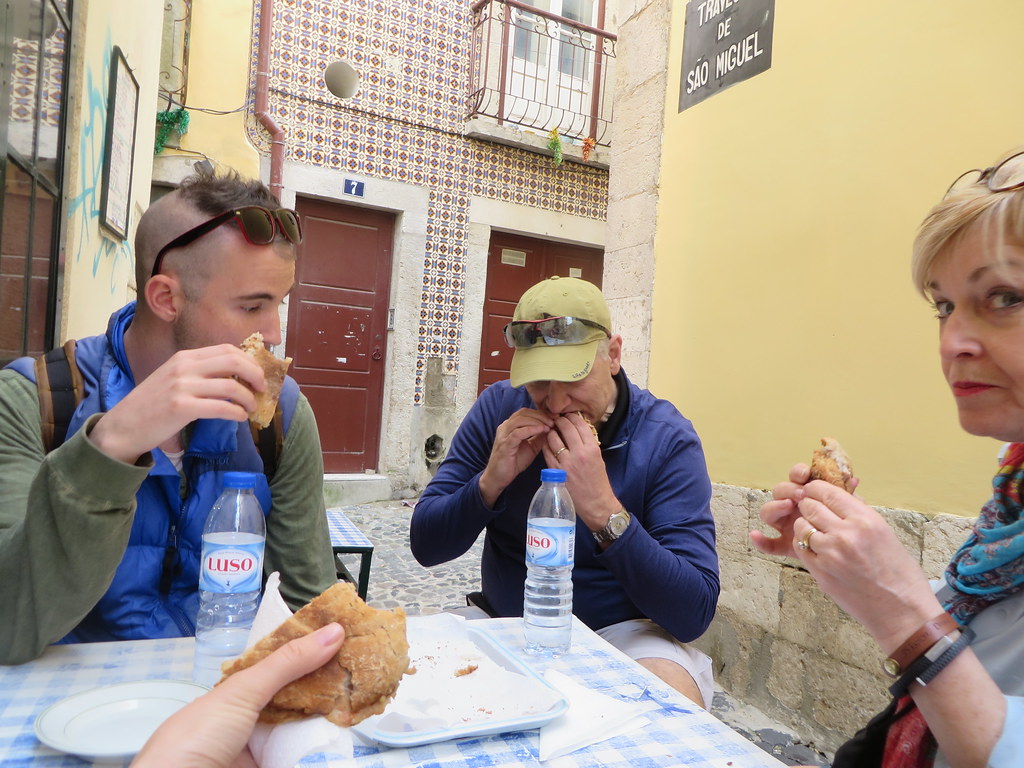 The next morning, we picked up our rental car for the rest of our trip, and were off! We made a quick pit-stop at the amazing sports store, Decathlon, and then to IKEA because, well, Kev can’t go past one with needing to stop, and then headed south to our next destination, Foupana, as a way to Tavira and Ihla de Tavira!