This past weekend Lindsay and I drove down to Morro Bay to do some camping and diving before next weekends big bug grab. The “bug grab” being a live-a-board dive charter we are doing with a bunch of friends (Nick included!) down near/around/on Catalina Islands off from LAish area.

So we got in, setup camp (and by camp I mean the tent) and were in bed by around 1am. This is around the time that the raccoons really seem to come out. This campground is actually really awesome (we went a few years ago with Nick and some of his other LA friends) but the number of raccoons that live here and come out at night is probably off the chart, if you were to chart the number of raccoons in all campgrounds with a reasonable upper limit drawn.

Anyway, in the AM after a semi-restful night of sleep Nick, Beau and I took off for the docks (Beau had some work to do and found a coffee shop). Lindsay would have come, but we ended up having two dogs for the weekend and sadly it was too hot for the dogs to be left in the car/tent. Lindsay if you read this I love you and am sorry you didn’t get to dive! That message to Lindsay aside, I think the first dive we did would have probably been something Lindsay wouldn’t have exactly loved anyway. The dive was to ~70-80 feet, with maybe 10 feet visibility. Shawn, our dive boat captain and dive master and really the only other guy we went diving with, tells us that even for the relatively poor visibility in the Morro Bay area, this was particularly bad vis. So that was a bummer. On the bright side though, we did manage to dive in what I’m guessing (and hoping) are significantly more difficult dive conditions then we will dive in next week, so it was good practice! 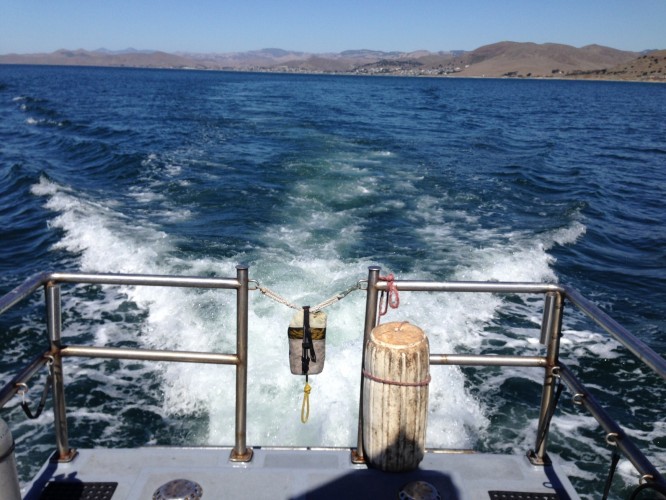 The second dive, was awesome. The visibility was still not great, but we went spearfishing! Which, although I haven’t posted about this yet I don’t believe, is something I’ve wanted to do for a long time! And something I want to do again! It was awesome. Shawn had a speargun which he let us borrow, and he showed us the proverbial ropes. Not sure if that’s a proverb or not, about ropes, or whatever, but anyway he showed us how to shoot fish. Turns out it’s not so hard, and WAY more my style then fishing with a hook and line I think. You are down there, looking under rocks, watching out for sharks (not really), finding some great fish, BAM shooting them, reeling them in, and putting them on your stringer. Honestly it was pretty awesome. Especially for a perhaps less then super beautiful dive, it makes the visibility not so important because you’ve got a task you are working towards.

We only had a single speargun, and we shared between the three of us, but I was able to get a reasonably sized black rockfish. Perhaps not the most awesome looking fish, but it tasted great. Honestly next time I fish I think I’d go for more rockfish because I thought they tasted the best.

Anyway, we ended up taking 2 cabazon, 1 lingcod, and 1 black rockfish. Honestly I think we could have probably had 10 rockfish but we were only shooting what we could reasonably eat (and even the four fish we got were plenty for two meals). 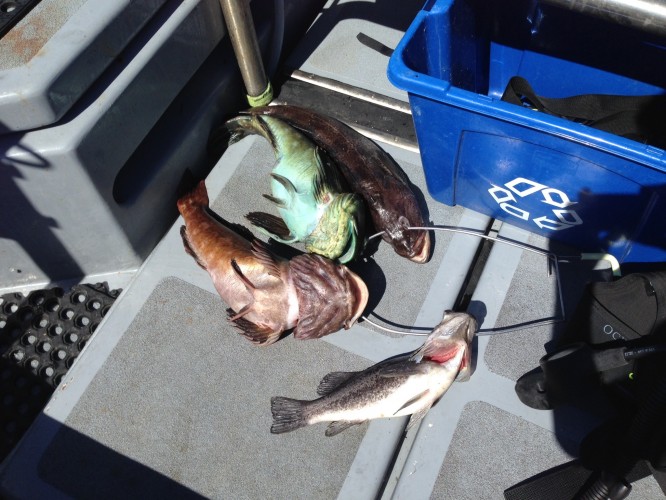 When we got back, Shawn cleaned the fish for us (taught us as well). Then we went back to camp, picked up Lindsay, ate some lunch, at some ice cream, then went home and cooked up the fish.