After leaving the Ashram, Lindsay and I went back up to Cochi (aka Kochi aka Cochin). We really wanted to get to Darjeeling, but Darjeeling is way in the North of India and it was going to take 50-60 hours (straight) via train to get there, so we opted for a flight.

Cochi itself is actually a pretty nice city. We ended up spending two nights there, and in that time we went to a fancy mall (Lulu) where I bought a shirt at Wildcraft (India’s version of REI?), we went to the nicest super market yet and tried some different foods (mainly deserts), we watch some traditional fishing (giant nets one a crane type device that four people lift out of the water), we had some great food, and we generally just hung out and walked around. It was nice to go to a slightly slower paced place. We walked around the night market also, which again was slower paced and felt friendly. Our first Indian park/night market/thing as well. Nothing too crazy, all of these things I’m mainly mentioning for my own memory.

Anyway, then we had a flight. Our flight was a mix of good and not ideal. We had three separate flights actually, and then an 18 hour layover! The flights were 1 hour, 2 hours, and 1 hour. So, 4 hours in the air, saving us roughly 4 days on a train or in a train station. We flew with Air India, and were served food on each flight. Which was awesome actually. After our first two flights, we ended up in the rather nice (not as nice as major US airports, but still nice) Kalkata airport around 6pm. Sadly, the way the flights work you end up outside of the security checkpoints. And with an 18 hour layover, that sucks. They wouldn’t let us back into the main airport (even the main lobby, they have guards with guns at the doors to the airport and require you show them your boarding pass before you get in. Basically, it’s a bit difficult to explain, but spend the first 2 or 3 hours sitting in uncomfortable chairs in this strange limbo part of the airport that was cut off from the main entrance (where you’d check in, etc) as well as the security cleared/gate area.

I’m rambling a bit. Basically, we eventually talked our way into the main check in area of the airport, where we could at least get some dinner. Then we found some chairs, and we tried to go to sleep in the bright/surprising cold airport. My back hurt very bad, and I think I got the most sleep at around 5 hours. Lindsay had around 2 or 3 hours of sleep. A highlight of the night: it’s common here for men to hold hands, lock arms while walking, put their arms around each other, etc. Men in camo with AK47s are no exception, and it was interesting to wake up in the middle of the night because two army guys with loaded guns were walking by hand in hand.

In the morning, around 6am when I wasn’t able to sleep again, I went to check us in. Turns out, our flight was cancelled until the next day! Luckily (VERY, i would have cried I think) they put us on a different flight (Jet Air or something similar), actually a few hours earlier which worked out really really well.

Eventually, we arrived in the city of Bagdogra (which is really difficult for me to pronounce correctly, btw). Like all of our India travel experiences so far, Bagdogra SEEMS like it should be a quick 30 minute drive from Darjeeling (our actual destination), but it ended up being an hour long taxi ride (for 10 bucks, which is a lot for our current standards), followed by a 4 hour process of locating a shared jeep, then waiting in the shared jeep for an hour for enough other passengers to buy a seat so we could leave, followed by a 3 hour trip (76km!) up a mountain to Darjeeling! That included an unscheduled 20 minute stop for the driver to get lunch.

But here is the real point of this post: The drive up the mountain (hill?) was amazing. It’s honestly near impossible to describe, but basically narrow, terrifying roads, at a steep incline, for 2.5 hours, most of the way through mist/fog, making the whole experience quite magical. Any amount of beauty/magic/steep lush green/colorful houses on cliffs/something from a movie/etc that you can imagine is likely not enough to do the experience justice.

Also, it got cooler and cooler as we ascended. When we arrived in Darjeeling, which for our purposes is a series of winding, dirty, but nice streets running parallel, connected in various places by series of nearly hidden steps winding through various strange allies/houses. It’s a bit difficult to describe honestly, because whatever you might imagine is likely not quite right because I’ve never seen something like this before. I’m hoping I’ll be able to get decent enough internet to upload some photos, but we’ll see. The buildings/roads/etc are just so amazing. Everything is super tight together, and walkways/paths between “major” streets are stairs/dirt paths/etc that are sort of just jammed wherever they could fit.

Anyway, when we arrived we first went to a guest house whose name I don’t exactly remember (“Sai N…..something”). Like most guest houses/hotels we’ve been to, they are generally not super clean, but OK. But, when you walked into this little dark/damp/dank/dirty room, you had a window that you could open, and when you looked out you basically just saw the edge of a cliff with mist surrounding you. When the mist leaves, you can see mountains in the distance, and to either side/below (down the steep cliffs) you see colorful houses, moss, tea plantations, green. Something like in a movie, that seems to awesome to be real. 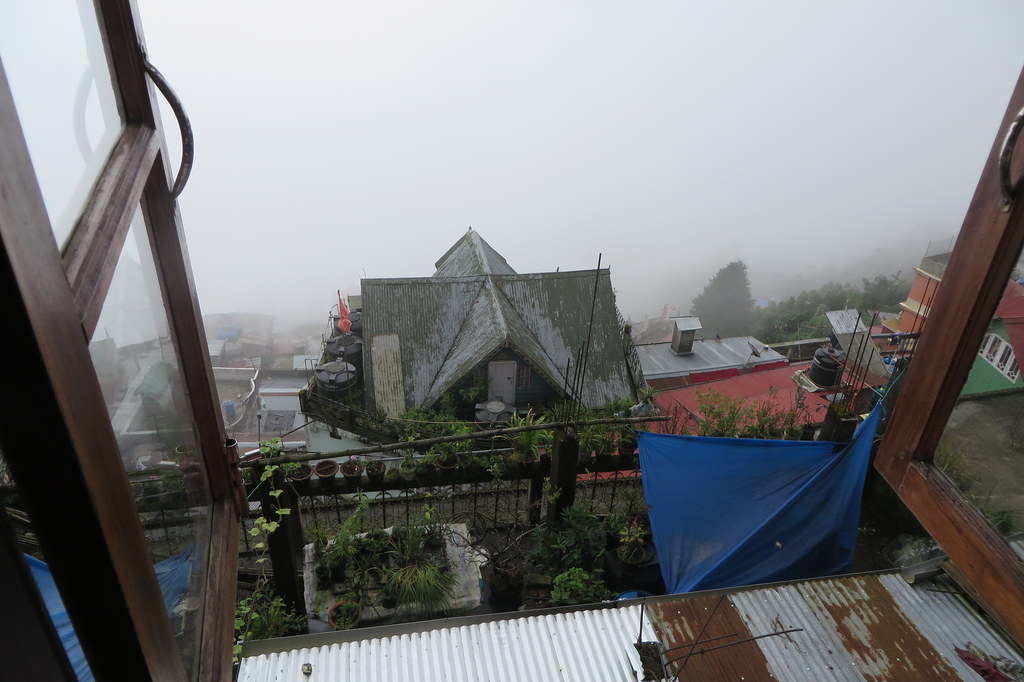 I have enjoyed imagining on foggy/cloudy days, when you can’t see below the edge of a cliff where I might be drinking tea with Lindsay, that we are on a floating island up in the sky. It’s very very easy to do. 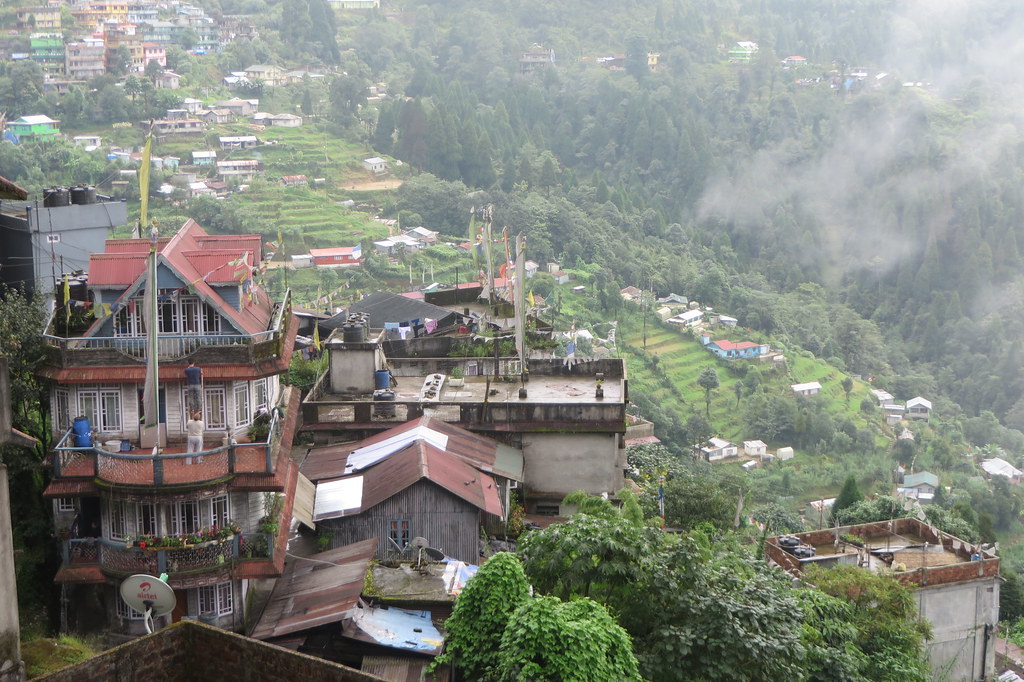 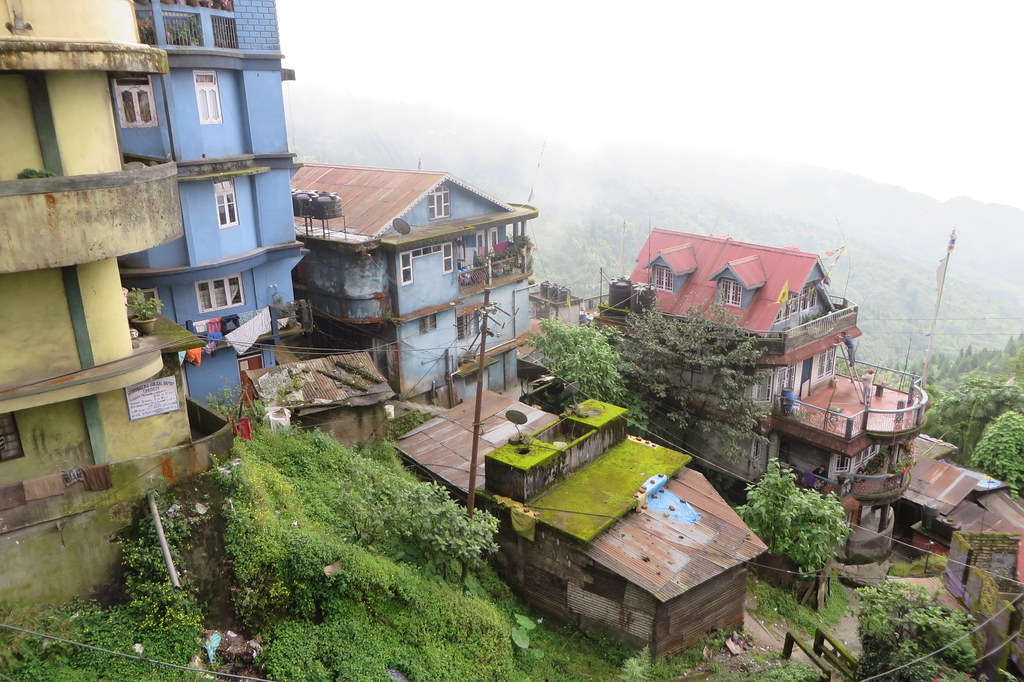 (Lindsay and I agree that this is our dream house, the one with the dude doing something with the roof. We’d like the top two floors, and we’d like it in the same location except closer to home.)

And, there is Tasty Hasty! Tasty Hasty is, so far in India, my favorite place I’ve eaten, with my favorite foods. In particular, every time I go there I got either the North Indian Thali, or the “Special” Thali. A Thali, btw, is basically a small amount of a wide variety of different curries/sauces/”curd” (yogurt)/etc, and includes rice and chapati (chapati being more common than naan, so far, in our experience). Anyway, it’s amazing, and it costs 1.50, and is enough for Lindsay and I to share. But, we also get other stuff to try/experiment. Tonight for instance, we got a paneer (cheese) dosa, which is sort of like a GIANT crepe that is fried crispy on one side, then rolled into a loose tube with a filling. And also we got another thing, whose name I forget, but is basically like a super puffed up elephant ear (looks sort of like a pita pocket that has been filled with air, except is made with a fried dough instead). This place is amazing, and the people that work there are awesome, and we get TONS of amazing food (and we eat it all!) and never spend more then 5 bucks. We could easily get more then enough food for 2.50, but again we try lots of different things. 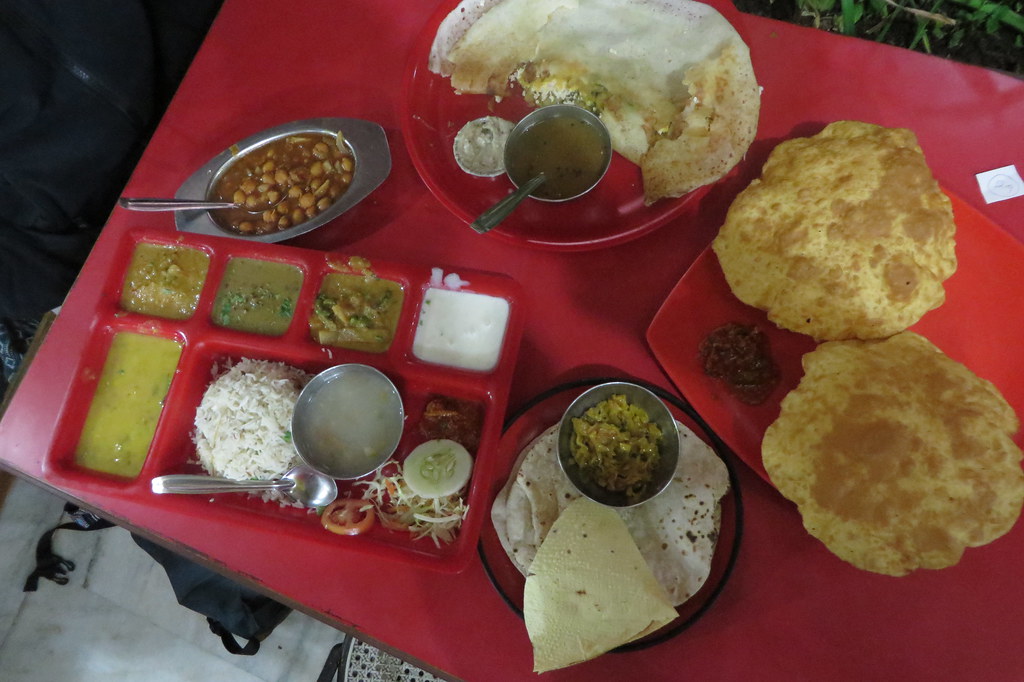 Other highlights from Darjeeling so far: 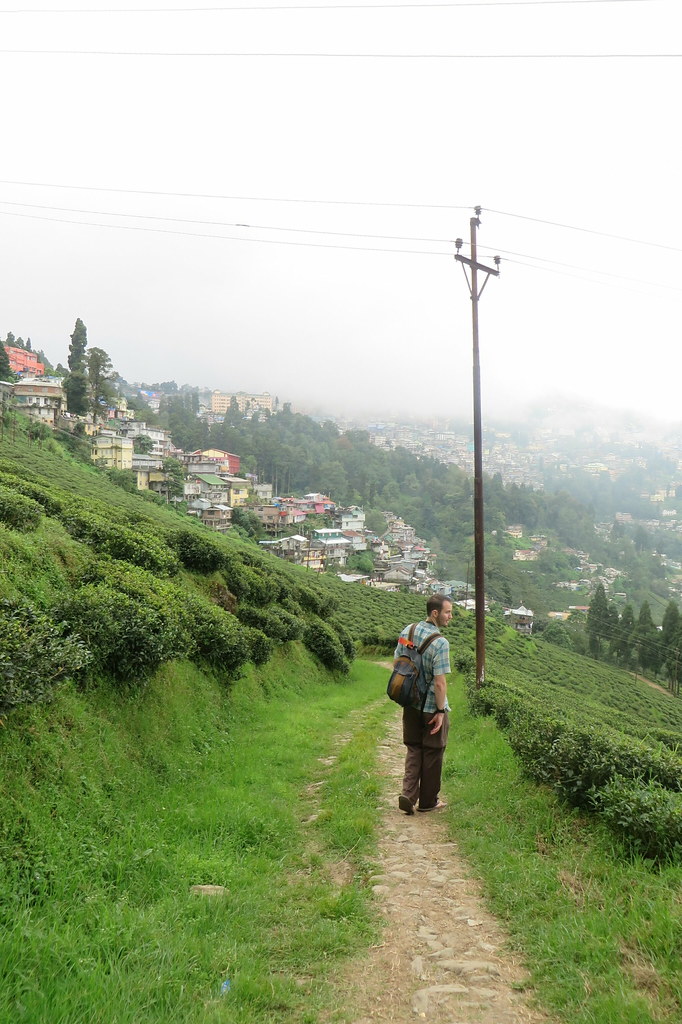 So, for now, that’s sort of an idea of what’s going on. I actually went to bed before this paragraph, and now I’m back up and awake on this paragraph, but I don’t remember exactly what I was rambling about. So.

I guess I’ll say that today, I took a shower with our hot water heater, which was amazing. It took roughly 30 minutes for the water to heat up, but once it did! My hair feels clean for the first time in a long time, because although I’ve been taking showers, they’ve all been cold showers which just doesn’t seem to do as good of a job.

Hello to Infield Design if anybody reads this. I miss you guys! I’m actually waiting at this very moment for a new vagrant box to start up – I miss programming and am going to install Magento and see if I have any free time in the next few days to do some old fashioned programming. Or maybe I’ll just browse the default store. One problem I’m facing currently is only half of our 12.5″ screen on the laptop is working. So I have to resize all windows to be half of the screen. This has been annoying, to say the least. On the bright side, it lets me see the responsive versions of most webpages, which is nice (not really).

I’m asking Lindsay after I type this sentence what we should do now, and will write her answer here:

“I’m going to email my parents and tell them where we are, then we can do anything. What time is it? (I told her 10:30am) I’d like to get some tea maybe. (I mention that we need to get our laundry) We could go check out the tiger hill thing, and we need to make copies of our passport for the train.”

So, that’s our current plan. The passport copy thing is because we weren’t able to reserve a train from NJP (the nearest train station) to Varanasi (our next destination) when we went to do this, and have to come at 6am tomorrow (this sounds like hell to me, btw) and wait for 4 hours in a line to get a “last minute” ticket for the next day, which for whatever reason requires a passport. I think because they save a certain number of tickets for last minute tourist purchases perhaps (??) and the passport is to prove that we are in fact tourists.

I’m not sure if I mentioned this above yet, but Darjeeling is amazing and we are incredibly happy here, and feeling very lucky. It is a place that I would recommend anybody come if you have the time to get here. I’m looking outside (now morning) from where I sit, for the first time, and I see mist and fog and interesting buildings and it’s pretty great and magical.

Love and miss you all!

p.s. I’ve uploaded a few photos, the internet is pretty slow despite having actual wifi, and I’m just going to sort of put the images randomly throughout this post as best as I can… sorry if they lack context!

5 Replies to “Darjeeling (and some other things)”