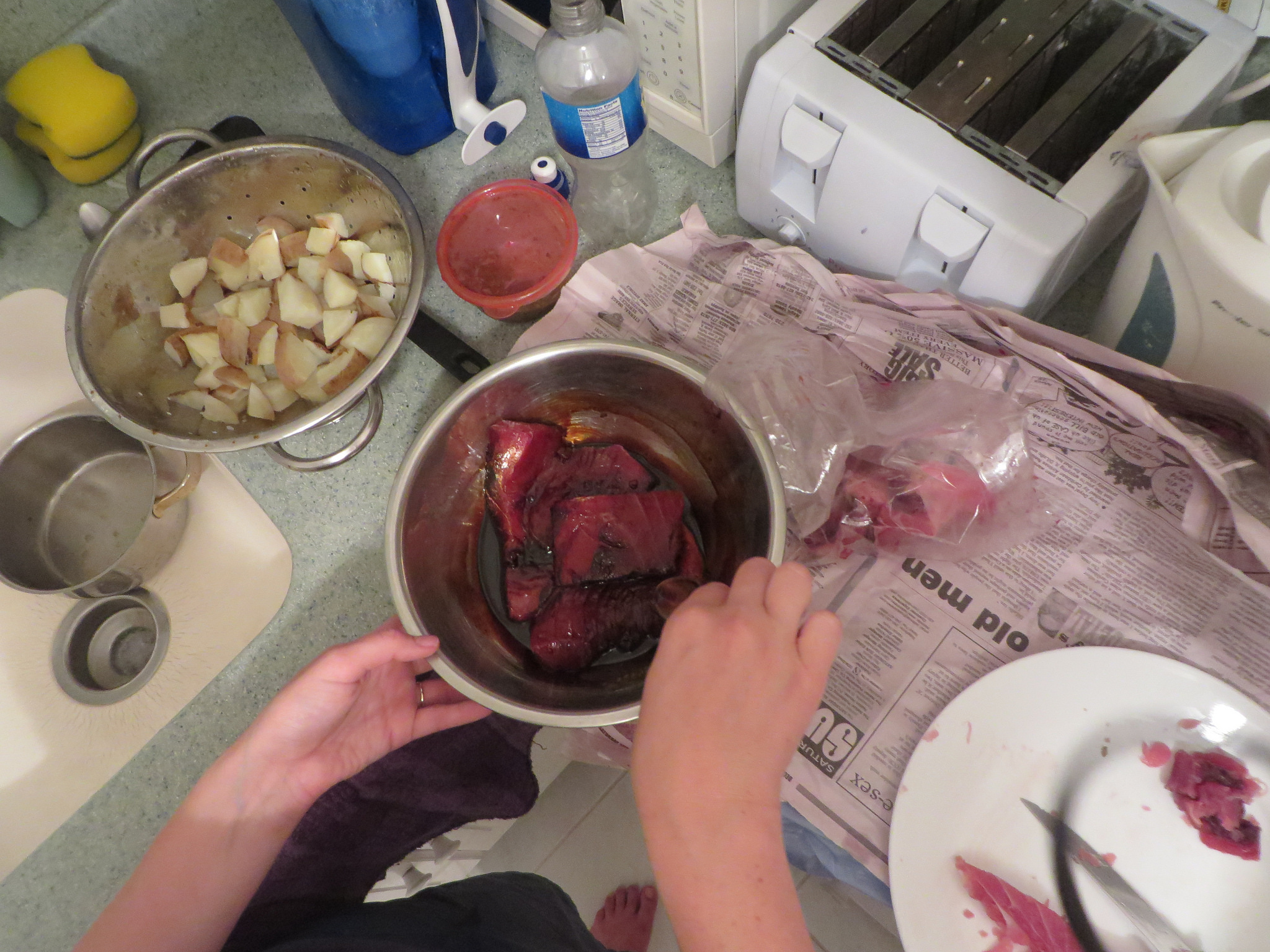 As you may recall (I’m actually not 100% sure we talked about this on the ol’ blog), the choice to come to Barbados was based on a few things.

First, we had expected that sometime in this year of travel we’d have had some opportunities to swim around in some beautiful water somewhere. India we figured that Goa would be this experience, but Goa was not exactly that experience, and we quickly ran into fall and winter in Asia and Europe without ever having any “go to the beach and go swimming” experiences. So, we figured on the way home we’d stop somewhere tropical. 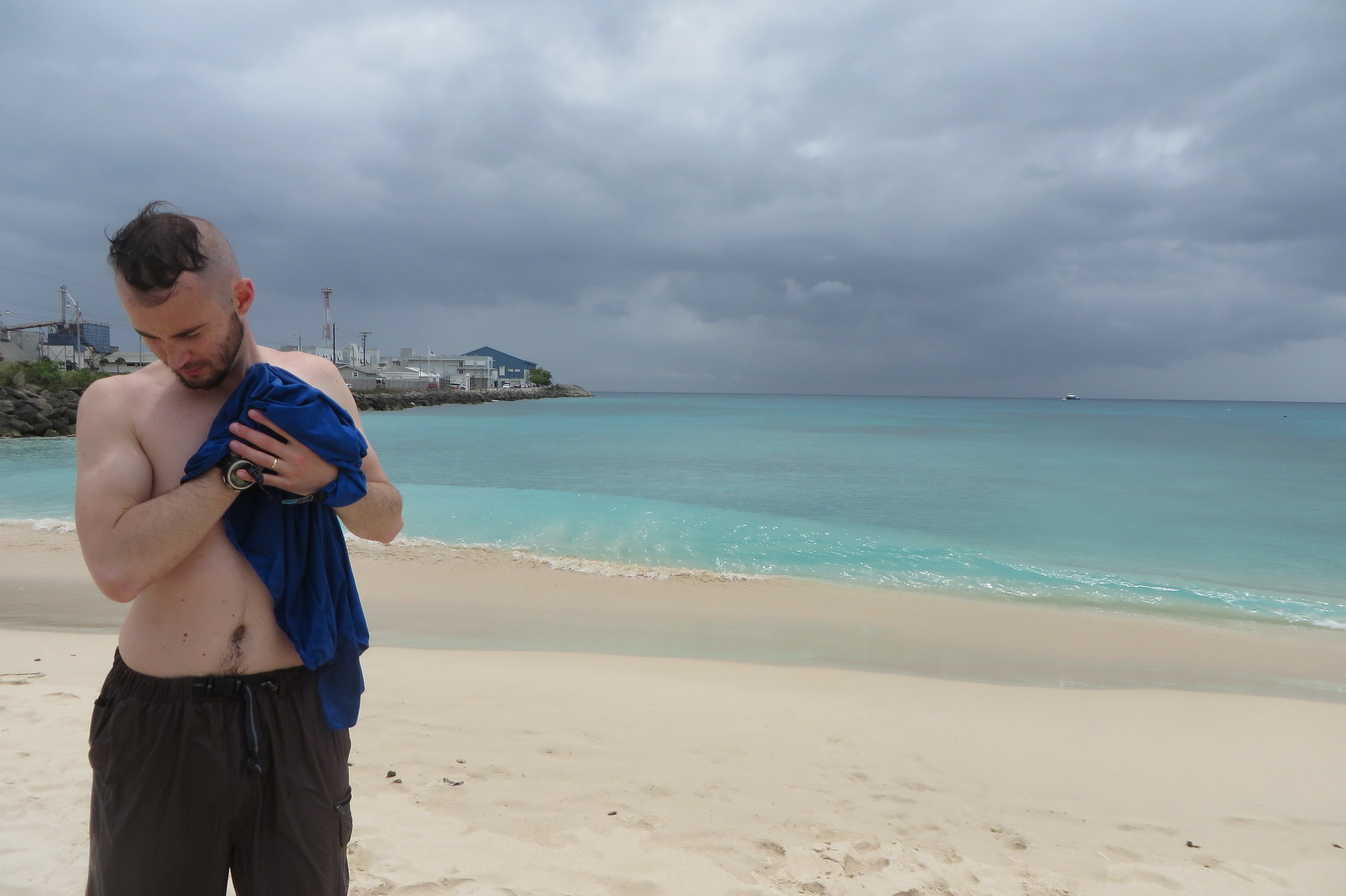 Second, my 30th birthday was in April and I decided I’d rather be somewhere on an awesome trip then hanging out in my parents basement (although Mom/Dad, I love our basement!).

Finally, and this was a requirement and a big part of the reason we chose Barbados (which isn’t the absolute BEST Caribbean island), we wanted to find a tropical destination that wouldn’t cost us much to fly to or travel around. Lindsay ended up finding an awesome deal on a flight from Lisbon to Barbados and so Barbados it was.

The flight it turns out was cheap at least in part because it was pretty brutal in terms of the actual travel. We flew Lisbon -> London, which was a 2 hour flight or so, but we then had an almost 6 hour layover in London. Then we flew from London -> Toronto (yes, only a 5 or 6 hour drive from home!), where we had a 12 hour layover. Then we had another 4 hour flight to get to Barbados.

Turns out Toronto airport isn’t such a bad place to sleep actually. We had a nice comfortable place to lay down. It was probably one of the best airport sleeping experiences I’ve ever had actually. Which was good, because we had a nearly identical 12 hour layover in the same airport on the way home.

When we got to Barbados (eventually) we were greeted with a great, hot and humid day. We immediately started out budget minded trip by skipping the lines of taxis and walking down the nearby street to wait with some locals for a bus. One of the things that I was immediately pleasantly surprised to find was how great the people living on the island were, and how great it was to once again be able to speak english with everybody. We asked one of the ladies at the bus stop waiting with us if she knew when the next blue bus was coming. She asked where were going, and then immediately recommended taking a “reggae bus” (possible misnomer) to our destination. We did this, and found that this was a great and liberating experience. These are basically mini-vans that often play loud music. 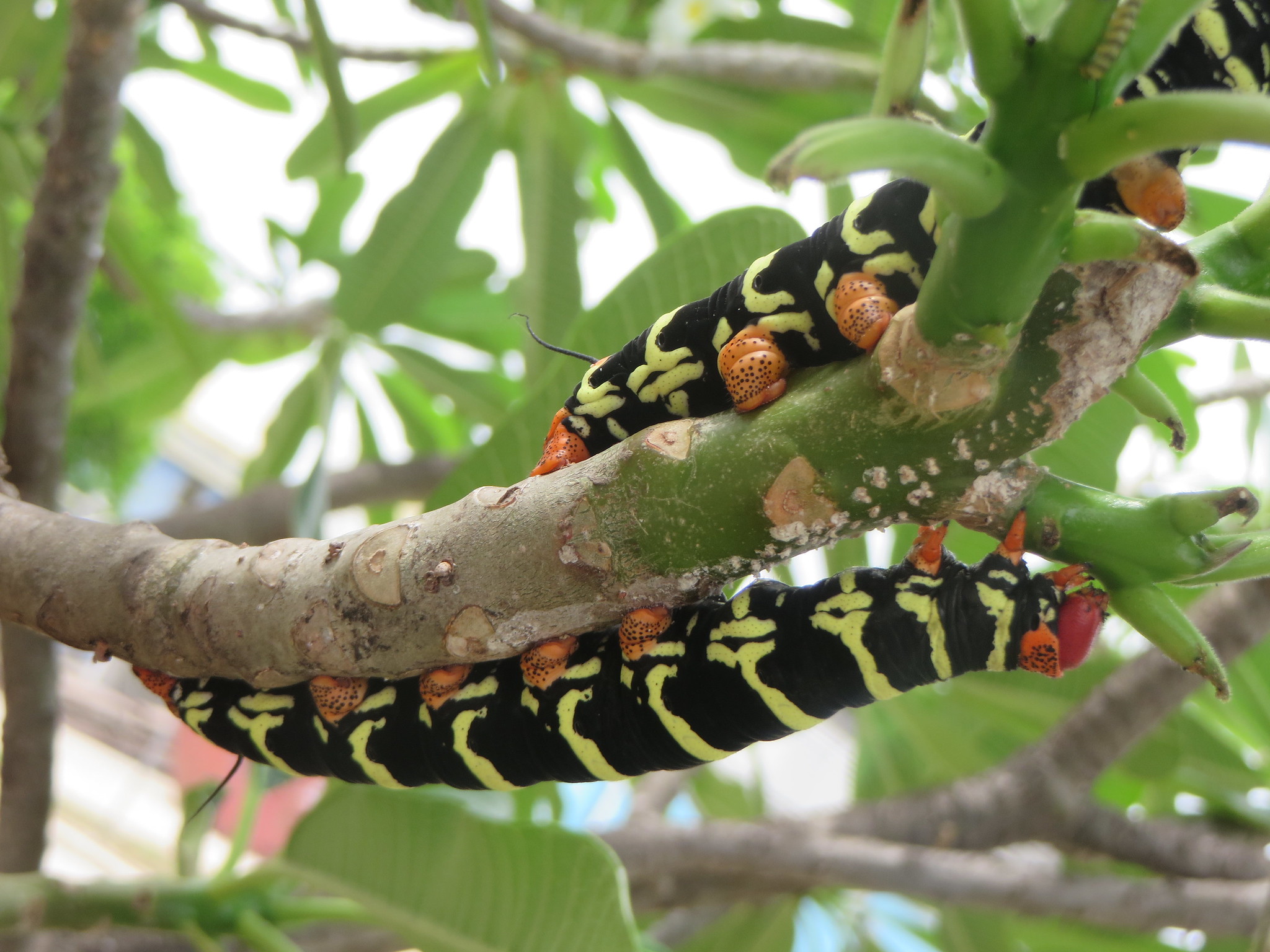 After the bus ride and a mile walk or so we got to our AirBnB place. It was a nice apartment/duplex, and we were staying with an older German host who ran a number of AirBnB/guest houses. She was very nice (though somewhat opinionated about things like what times it was safe to go out to the beach), and I quite enjoyed talking with her. I ended up spending an afternoon helping her get her Facebook pages for her various properties setup and configured like she wanted, and she seemed very appreciative which made me feel good/useful.

We had the upstairs of this apartment nearly to ourselves. In the interest of saving money we brought something like 10 pounds of muesli from Portugal, plus a number of other small food items, including the bottle of Port I purchased in Porto. We also brought some coffee and our trusty drip coffee filter. To be honest I figured it might be a bit rediculous to bring all of the food we did but in the end I think it was an incredibly smart thing to do. A small box of junk cereal cost something like USD $5 or $6 bucks. We had enough muesli that we ate a nice full breakfast and had nice coffee for the entire 8 or 9 day period that we were on the island. I’m guessing that saved us 50+ dollars.

So, what did we do on the island besides eat muesli.

There was a fairly nice, white sand beach within a 5 minute walk from our apartment, and we spent quite a bit of time at the beach swimming and reading. It turns out that unfortunately there was some sort of algae/seaweed-raft issue in the water surrounding Barbados and so the water clarity on the beach near our house was pretty terrible. But, the water was incredibly wonderfully warm and so we spent quite a bit of time just swimming in the water and walking along the beach. Lindsay ran on the beach.

We also went to a few of the local grocery stores, including one of the bigger stores (that we took a taxi to), and we bought some various foods to cook dinner. We had fresh fish a few nights, which was surprisingly cheap and wonderfully delicious. Lindsay made jello, which was terrible.

There was this somewhat shady little area where they had food stands/huts setup that was close to our place, and we went there a number of nights to have great fried chicken and macaroni pie. The chicken was seriously so good. And it’s a pretty nice experience to be sitting there at the little counter of this dirty little food hut, while the locals (and a few tourists) are sitting around talking and drinking. I mentioned it’s a somewhat shady place with a somewhat questionable vibe, largely because it sort of felt like a place where younger local men entertained older tourist women. And also all the people trying to sell me marijuana and harder drugs. Part of the experience of course.

On my birthday I had planned a spearfishing trip. This turned out to be awesome, though full disclosure, I didn’t end up getting any fish (despite what the photo above looks like – I actually hooked this particular lion fish with a single barb through one of it’s fins but it go off). BUT, man, the spearfishing and the water was BEAUTIFUL! As I mentioned the water near our place was pretty miserable in terms of visibility, but the guy that I went spearfishing with took us to the very North West part of the Island and the water was seriously beautiful. This guy and I dove for around 3 or 4 hours, until the sun started to set, and Lindsay enjoyed the much more beautiful water to snorkel and swim and read. Despite me not getting any fish, the guy I went with got two decent sized Lionfish and he filleted them up and gave us them for dinner. On the way home he drove us to this amazing local outdoor fresh fish market and we bought a few pounds of fresh from the boat tuna and 10 flying fish fillets. Lindsay and I cooked this up when we got home and had an amazing birthday feast. 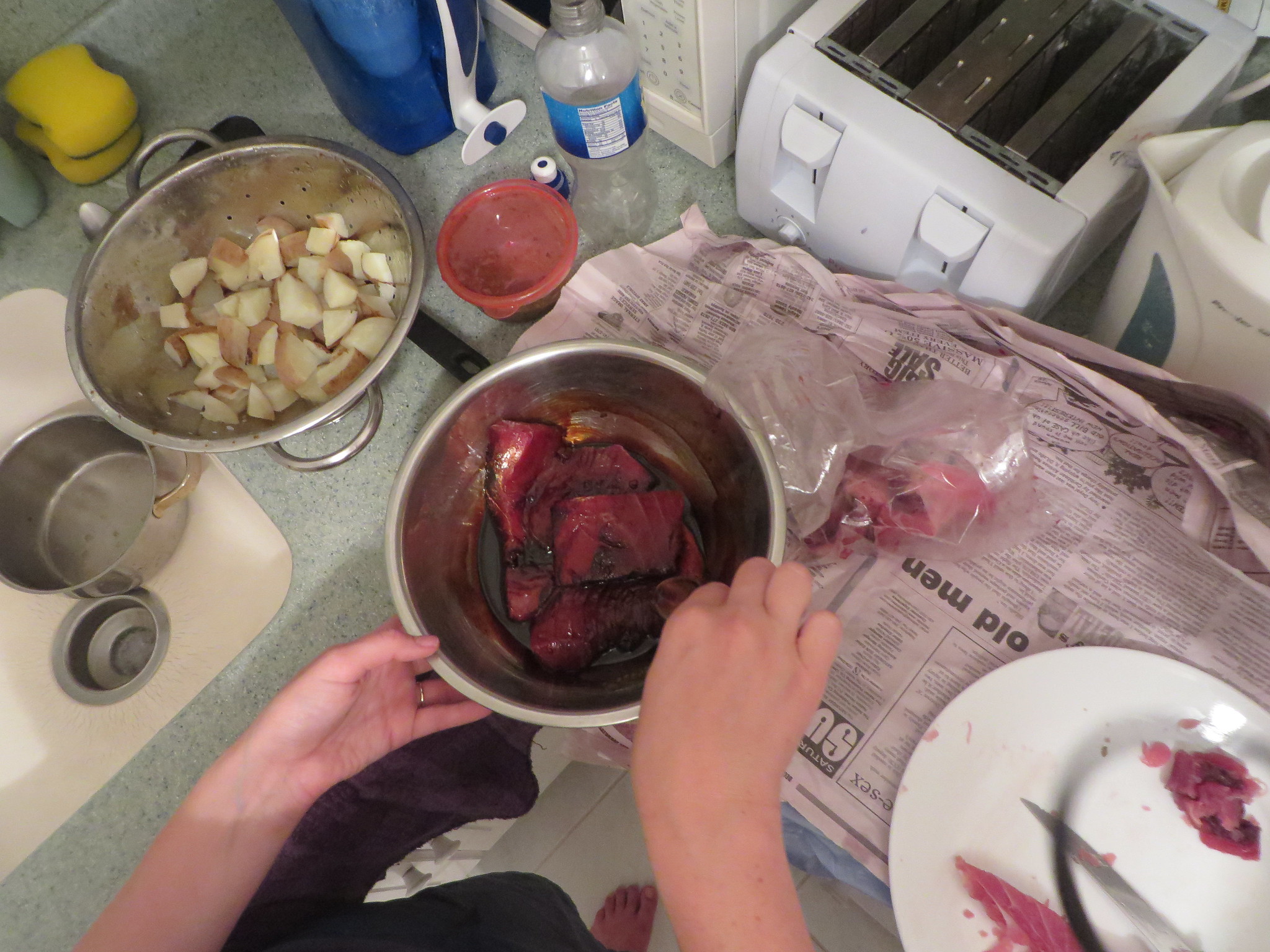 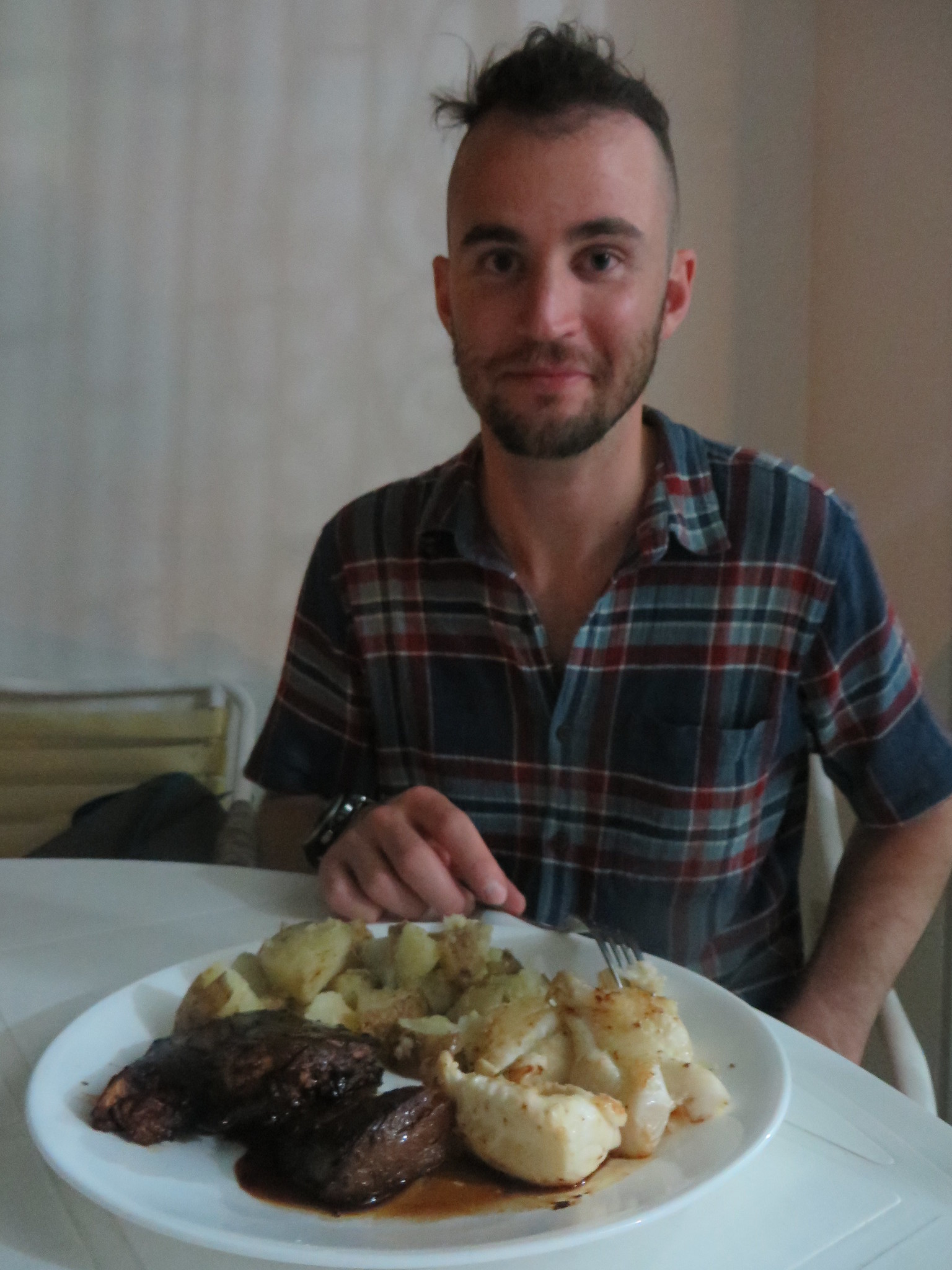 Lindsay had a great pudding pack birthday cake for me. I managed to blow out all 30 candles without any issue (almost too easy!). After the festivities (Lindsay brought me THIRTY kinder eggs for my birthday, from all around Europe, which is you know how big kinder eggs are and how her pack is, was truly an amazing thoughtful and difficult gift to give. She also bought me a VERY VERY nice Patagonia vest to replace the vest that I love very much from Alicia), we sat outside and talked. Lindsay attempted to get me to go do some hardcore 30th birthday partying, but honestly I was so incredibly sore and tired from the days freediving (it doesn’t seem like it’d be a lot of work, but it’s pretty physically and mentally exhausting) that we ended up just spending the rest of the night together on the deck talking and drinking some of my fancy 3 dollar port.

One day I heard about a website that showed what local activities were going on around the island and I found that there was a talk at a local community center in the main/only city of the island. The talk was on mental health issues on Barbados. We decided to go, because frankly after so much travel the “normal” tourist stuff like “drink rum punch and lay on the beach and go to the bar at night” thing was not so exciting. This talk ended up being probably the coolest thing we did the entire trip. We first took a mini-bus to where I THOUGHT the event was (Queen’s College or something), only to find out that there was another event (not ours) taking place there. We asked the person there how to get to the correct building and she explained the directions to us. But not 5 minutes after we started walking, some random girl in a car drove up along side us and told us that the women who had given us directions had mentioned to her that we were walking and she was going that direction anyway so she offered to give us a ride. That might be a confusing sentence, sorry. Basically, a random stranger was really really kind and found us a ride. When we got to the community center it was really an amazing thing. All of these local, normal, kind, but different people were gathered to hear this talk. The talk was pretty good, but afterwards the women who had given us the ride to the event had gone around and found us another person who was going towards our apartment to give us a ride home! We stayed a bit to socialize, and met a bunch of really nice and friendly people.

The biggest thing is I realized how much more there was to the island then just the normal tourist stuff. People really lived there, and there was a real community there. I felt very lucky to have been able to see a glimpse of this “real” part of the island, and to be among the locals in such a normal, non-touristy setting.

We did the Mount Gay Rum tour, which was OK (the rum was good, the tour was pretty tourist and boring). 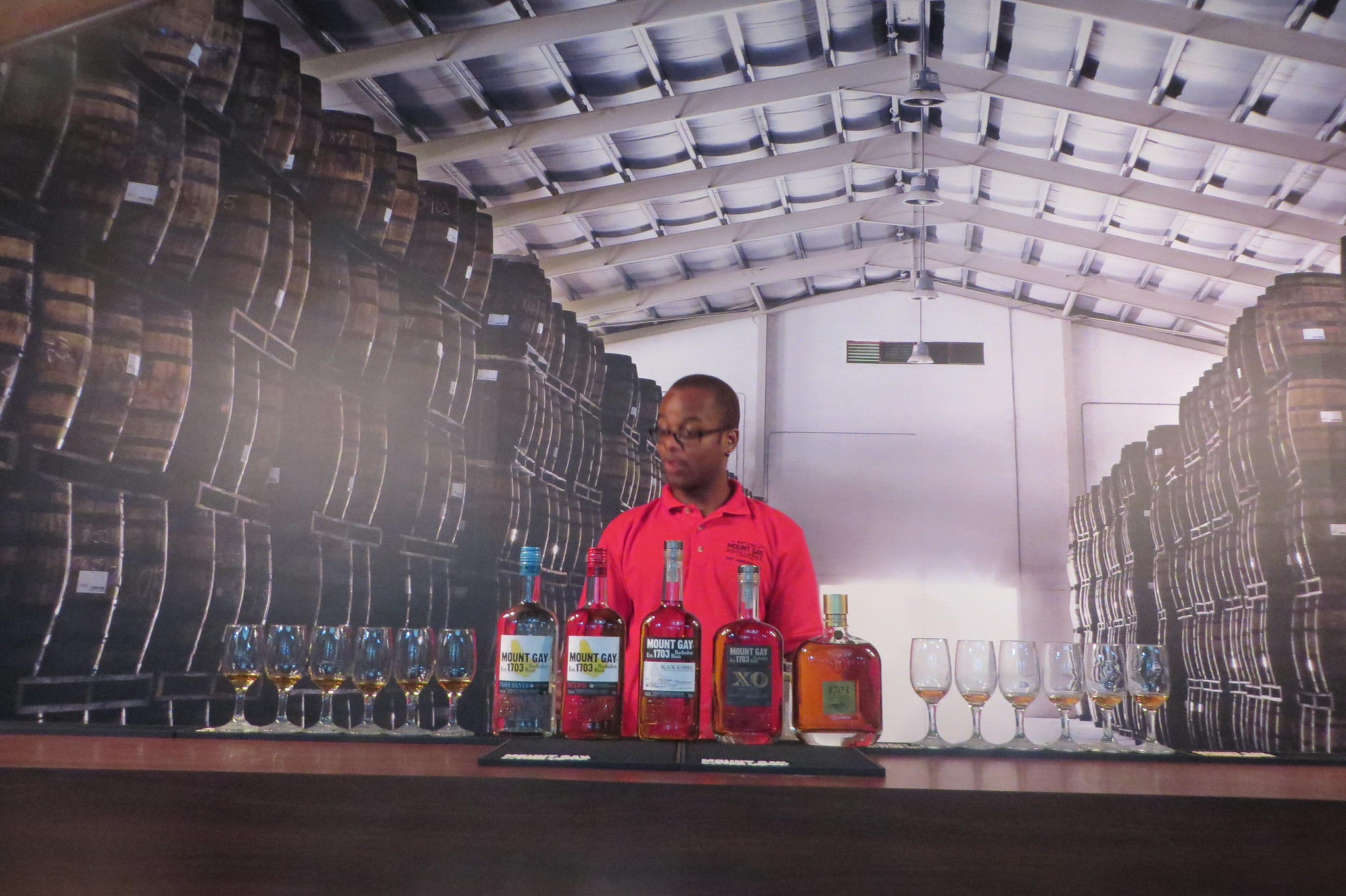 A few days after the spearfishing, once we learned how great the West/North beach/water was, we spent a day taking a bus to the same area again. We met some peoples from NYC and spent a good part of the day hanging out with them and swimming/snorkeling around the water. Beautiful, warm water. Lots of tropical fish, and even some reasonably nice coral and fans.

I think the thing I’ll miss most from Barbados, and from the trip in general, is simply the number of mornings I got to sit with Lindsay, with nothing but time and new adventures in front of us, drinking our coffee and eating our muesli. Our last day of our trip, and our last day on Barbados, we did this. Luckily the sadness and feelings of loss of our adventure and travel days was tempered with our excitement to see our families. Still, I knew that last morning together was significant even if I didn’t feel the full weight of things.

The last day after breakfast we swam once more, took a shower, and headed for the airport. We had an uneventful trip to Toronto, where we spent another night in the airport, and the next day we were in Detroit by 11am. Mom picked us up and we were at home in Michigan by dinner time!

One final thing: as luck would have it, we got home on a Monday. Tuesday, the very next day, Lindsay had an interview in Chicago already at the school that she (after 4 interviews) JUST got a job at. So, it was pretty crazy. One life finished, and immediately another began.