I can barely walk today – today is Monday. Last night we returned home from Sykes hot springs, where Lindsay and I completed (yaaa!!!) a 2 day, 20 mile hike. This is my second (Lindsay’s first) hike-in backpacking trip (the first being much shorter, only a few miles, into Joshua Tree), and for whatever reason we decided that it would be a good idea to start our backpacking experience together with a trail rated “difficult.” See everytrail.com for details if you don’t believe me.

We started out Friday. Lindsay picked me up from work and we drove straight to Big Sur Station, which is roughly 2.5 hours, perhaps a bit longer (and MUCH longer going the other way with Sunday traffic!). We slept in the Yaris (in retrospect I wish I had gotten a photo of this) which I would call a small car (wikipedia calls it a subcompact). Surprisingly we both slept pretty well in the car. We put the back seat down to make a flat-ish surface, then pushed the front seets forward so we had some room for our feet to dangle. With our camping mats underneath us and our camping packs in the foot wells to give us something to rest our legs on (well, in theory) I would not hesitate to sleep in the car again.

Saturday morning we woke up a little before 8 am, packed up our stuff and headed off. For anybody curious, an approximate list of items we brought include:

So anyway, we headed off with that stuff!

As I mentioned, this trail is marked “difficult” and about a mile in I realized just how true this is. The first ~3 miles is exposed and almost 100% uphill. Sometimes gradually uphill, in the good spots, but other times “this is really terrible” uphill. Not so bad that you had to scramble up or CLIMB up anything, but uphill. It was very beautiful, but honestly those first three miles I think we were really just trying to keep walking.

After the first three miles things got a bit easier. The trail NEVER really is “flat” (the entire time you are winding up/down the side of a mountain – at least I think it’s a mountain. In Michigan it was a lot easier to tell because there were not mountains, so you always knew you were dealing with a hill. In California, it’s a mixed bag. I’m going to call it a mountain.), but you don’t have such a clear feeling of dread when you do have to go up. 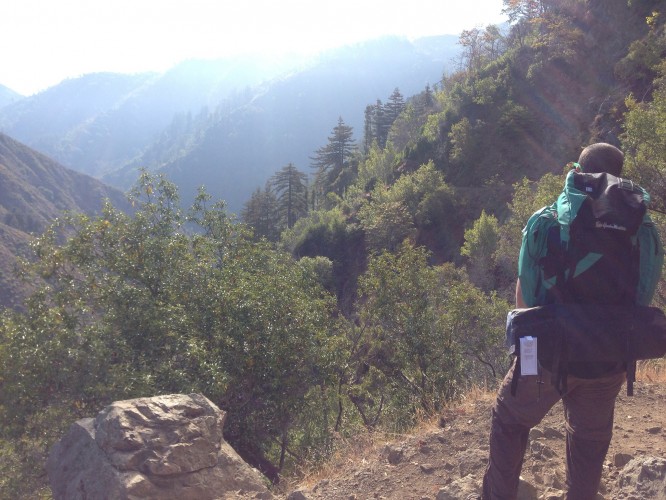 At mile five is a campground (whose name I forget) and you have your first real encounter with the river/stream that runs through the canyon/trail. If I were to do this hike again, I might stop here for the night to break up the walk a bit. 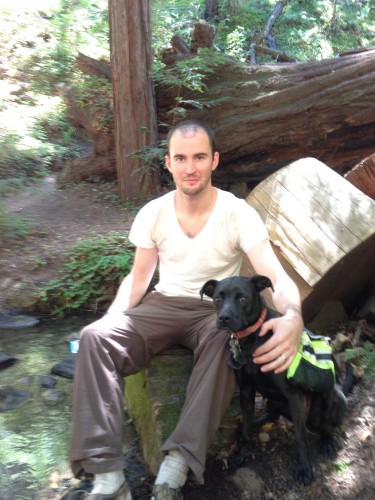 Around this point in the trip (ok, I’m lying – it was actually about 3 miles back) we started to encounter people on the trail walking back from Sykes who had encountered a hornets nest. The first couple we talked with claimed to have been stung something like 10-13 times EACH. Every single group we encountered after that had also been stung, for a total of something like 6 groups of people. The idea of being stung by a bunch of hornets wasn’t particularly exciting and unfortunately added to my general feeling of “man I wish I was done with this hike!” but oh well. 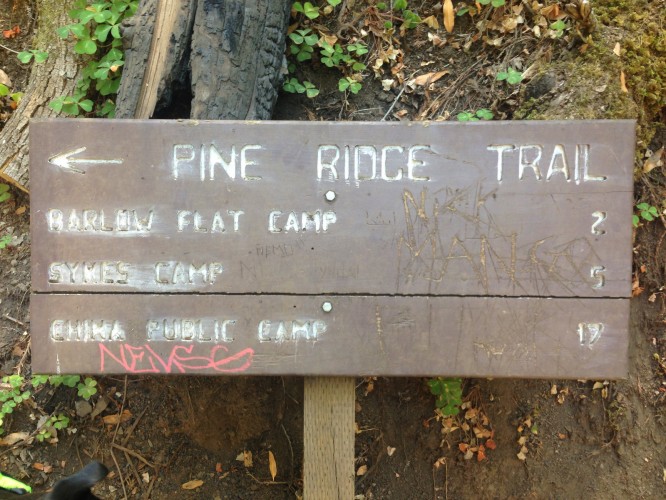 Around mile 7, which is Barlow Flat Camp, we started to hit a lot more downward sloping trail. This is perhaps one of the first times in my life that I ever have had a serious problem with my body in a mechanical sort of way. Basically my left knee started to hurt. Part of this is likely thanks to the fact that I was wearing Keens without socks and had a bunch of blisters on my right foot and was likely walking funny, but regardless, it started hurting. Honestly, my knee hurting was a major theme of the next two days, but it’s sort of boring so I won’t dwell on it.

OK, so finally we get to Sykes! It’s amazing! Green/blue pools of water in the stream. Etc. It’s wooded. All of the camping is along this river, so no matter where you put down your tent you have the sound of the river at night. And the hot springs are right there also. 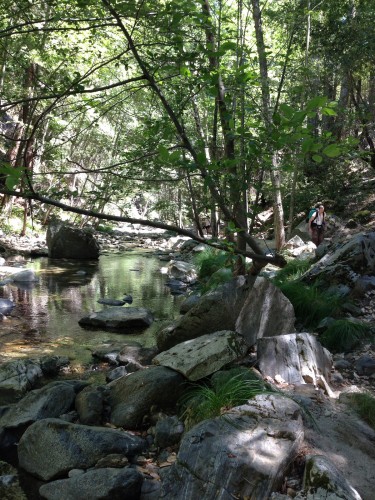 I’d never really seen such a nice hot spring to be honest. There were basically two “tubs”, one you had to climb up to get into, and another that was directly beneath that collected the draining water from the first tub. The top tub was rock, and was deep enough you could easily sit and be covered with water. The water was the PERFECT temperature (well, in reality I would have probably preferred a nice cold pool).

So Lindsay and I sat in the hot spring tub for a while, then quickly jumped into the river to get rid of the sulfur smell. After that, it was back to camp (400 feet away from the springs, though it felt like a lot more with the pain in my knees/legs). Lindsay took a short nap and I read some of my book. I noticed the sun was just starting to go down, so woke Lindsay up and we made dinner. 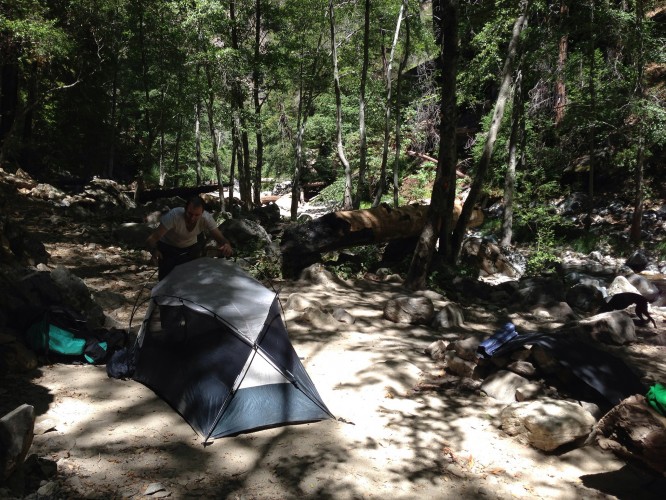 Dinner (which if you read the list of packed items you already know about) was two freeze-dried backpacker dinners. They were not very good, but to be fair I believe I did a poor job mixing up my pad see ew. It wasn’t until after dinner that I realized there was a pocket of untapped flavor (basically ALL the flavor, by the taste of it) powder that I had failed to stir up. This stirred up some emotions in me. Mainly disappointment I’d say, because I was so hungry but dinner was so unfulfilling. On the bright side, the chocolate mousse was pretty good. 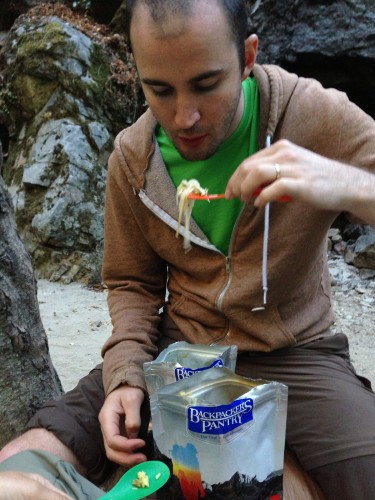 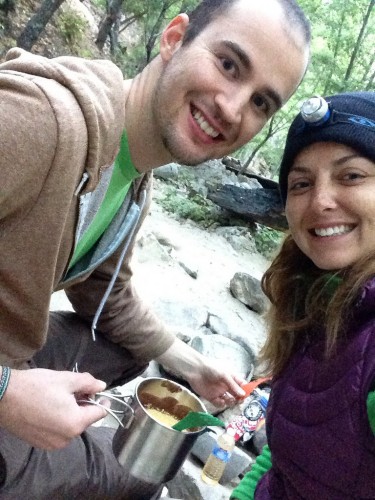 After cleaning up dinner (take only photographs, leave only footprints) we sadly went to bed. It was around 9pm. I think if we did it again, and if we had a day to recuperate, we would have probably went into the hot springs again at night. Frankly it would have been awesome. The stars were beautiful, I imagine.

I slept pretty well throughout the night. There was one time that I woke up and could smell skunk (note that bears were not an issue at this place apparently, but skunks were) but I just went back to bed. Sai woke Lindsay up a bunch of times (growling at random sounds outside) but overall the night passed without incident.

In the morning (Lindsay’s birthday!) we woke up and I made coffee for us. We skipped breakfast (possibly a dumb idea) and quickly packed up camp. I think by 8:45 we were on the road. And by on the road I mean making our way to the trail head. It took us a good 30 minutes to walk that first half mile on account of having to remove shoes to talk through the river at multiple spots. Etc.

It’s worth noting that at this point my knees BOTH started hurting again. I can’t really describe the feeling of dread I had at this point, knowing that we were JUST starting but had 10 miles to walk, with my knees already killing. But we walked on! Around two miles in we ran into the wasps we had missed the first time around, this time Sai was stung five times, Lindsay twice, and me only a single time (in the leg, to add insult to injury). This wasn’t so bad, other then the momentary fear that Sai was going to run off the mountain as she was panicked and trying to get the hornets off of her.

Miles 3-6 were relatively painless actually. Mile 6-9 were murder again. There was one moment when I remember wondering if I was actually going to make it, literally hobbling along. I walked backwards for a good mile I’d say, any time the trail went steeply downhill, to try and save my knees. It’s worth mentioning that Lindsay helped me not die. 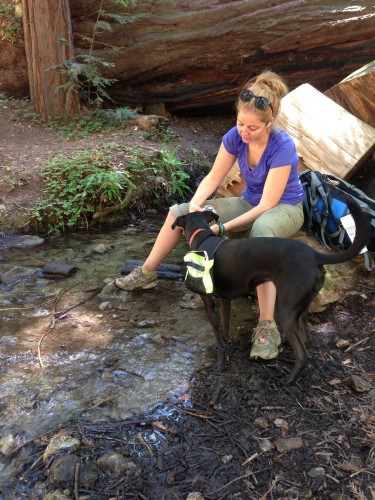 When we finally got back to the car, we were both really happy, but also very tired. Sadly, I’d say we were tired enough that we felt more like we wanted to just sit and be quite with the AC on, then celebrating and highfiving. High-fiving. High fiving. Fiving-highly. 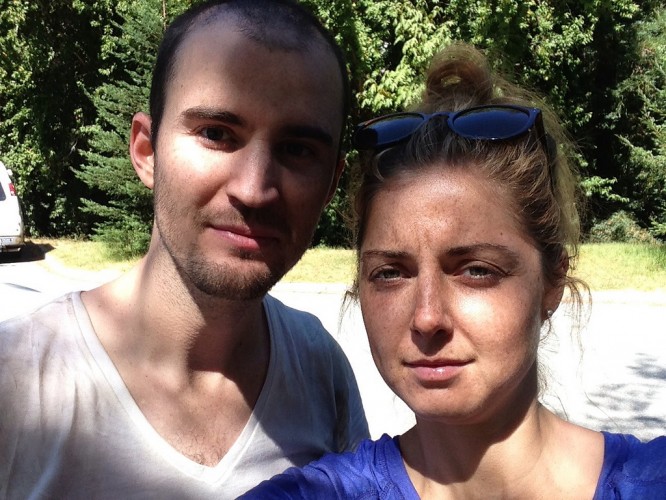 Then, I ate a chocolate flavored pretzel and had a strange sensation that my throat was being cut to pieces. I have no idea what the hell is going on, but as I type this (two days later) my throat is still killing me. I’m not sure if I have some sort of allergy thing going on, but it hurts.

Now, I’ve done a fair amount of complaining here, but at the end of the day, the take away from this trip has been that 1. I am really happy that Lindsay and I did this together.

We drove home (4 hours in traffic!), went to Round Table Pizza for the first time ever to get some perhaps not super awesome quality but awesome tasting pasta as well as a “cake” aka frozen cool whip – Lindsay didn’t want a store bought cake) and 28 candles for Lindsay to blow out. Due to my throat hurting I wasn’t able to eat much food, but I sang Happy Birthday and Lindsay blew out her candles and all in all it was a successful birthday weekend. 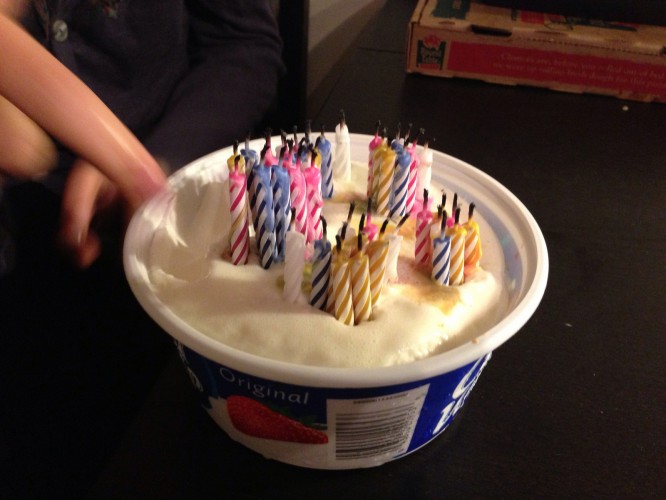