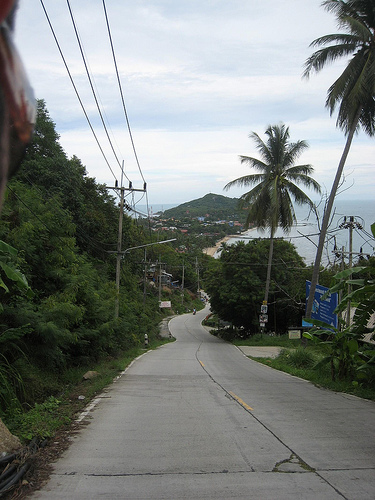 update: here is another sweet video 🙂

Very quick update as Lindsay is hungry and she gets like Nick when she is hungry.

Today was perhaps the best day we’ve had thus far, we rented a scooter and rode around the south end of koh phangan all day long. it was honestly amazing, like out of a movie. We’ll post more about it later, but for now check out flickr for a few photos from the bike. sadly the photos don’t do the experience justice, so we took a few videos, unfortunately they were too big to upload right now (well, not really, but with lindsay’s hunger in the picture no way she’ll last another 20 minutes while the video uploads!), but there is a small one in which you can at least see the bike.

http://www.flickr.com/photos/shoelessone/2684625779/ (edit: it’s posted below actually, hopefully. These computers are from 1993 I think, so things don’t always work.)

p.s. here is a view from the bike: