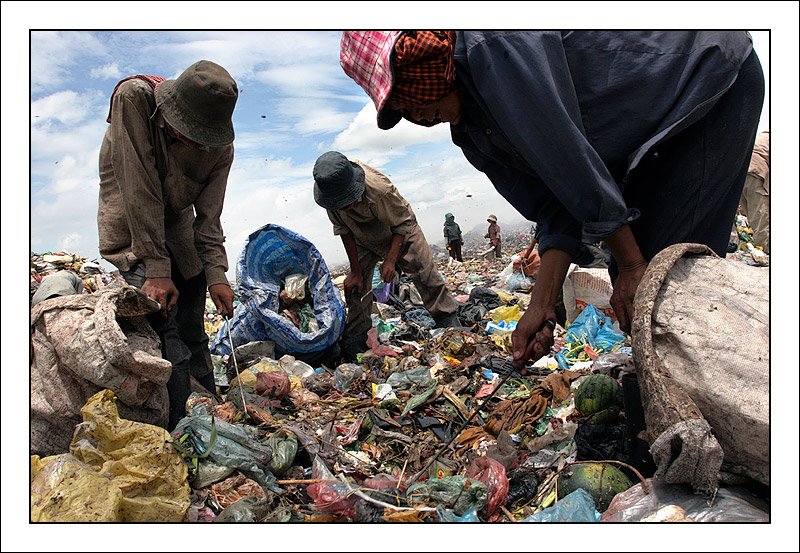 thus far, cambodia has been somewhat of a hard place to travel. not for any real reason, besides the pace is so much slower than Thailand, and the people seem so much poorer. we’ve been staying in Phnom Penh, and for the life of me, i can’t wrap my head around the fact that this is in fact a CAPITAL of a country. people beg on the streets all day, everyday. í know it could be just a gimmick, but it’s been extremely hard for me, knowing full well that no number of riel that we could possibly afford to give would really help all that much. it’s tiring. for the last few weeks, i have resorted to carrying around carrots and various other food items in my pockets to hand out to the street kids that beg for food (i would carry around a backpack chock-full of food, but we’ve recently heard about a large upsurge of bag-snatching, both in broad daylight and at night; in crowded streets and deserted ones alike. the victims are almost entirely western women riding in tuk tuks or on motorbikes, so i’m sticking to carrying stuff in my pockets! :)). giving money (or so i’ve heard) makes them extremely vulnerable to explotation, which is expected. it’s hard. Phnom Penh alone claims to house 40,000 street kids. 40,000! it makes me sad, frustrated, helpless and angry every time.
the other day, we visited Tuol Sleung Prison (s-21), which was about a block from our guesthouse. the prison was once a highschool which was converted into Cambodia’s most important and secertive prison in 1975. More than 14,000 people were tortured here before being killed at the Killing Fields south of Phnom Penh; only 8 prisoners made it out alive. what really made it disturbing for me though, was the fact that this prison is truly in the heart of Phnom Penh’s suburbia (if you could have ever called it that). apartment buildings and shops surround the walls of the old highschool, just as they would in any major city. the fact that 14,000 people were tourtured among streets bustling with street vendors, shop keepers and city residents blows my mind. it’s sick. really makes you wonder what’s happening in your own backyard. oh, not to mention that it happened almost within my lifetime. it’s one thing to read about hitler in history class. it’s another to see tourture rooms still stained with blood, the thousands of battered mug-shots on the walls, and the men and women, who could be my parents, on the street, knowing full well that they are probably survivers of a horrific genocide which happened less than 25 years earlier. it’s things like this i know i must see to truly know what a country is all about. it leaves a mark though, for the good or for the bad, and is something i know i’ll never forget. it makes me angry.

(i’ll post pictures when the internet connection isn’t so slow).

Stung Meanchey Municipal Waste Dump is located in southern Phnom Penh, in a district of the city of the same name, Stung Meanchey. it is a part of the city with low-income neighborhoods and slums. the dump itself covers about 100 acres, or almost 6 hectares. it’s flanked by private property on which rubbish pickers build makeshift huts and are charged extortionate rents by landowners. roughly 2,000 people, about 600 of which are children, live and work there. it’s nicknamed “Smoky Mountain” because of the miasma of smoke that the dump constantly gives off. It is literally on fire; the waste creates methane as it rots and the methane burns. in monsoon season and throughout much of the rest of the year, the surrounding area is swamped and the children live and play in fetid water. most of the rubbish pickers at Steung Meanchey are either from Phnom Penh or came to Phnom Penh looking for work and ended up in the slums. many of the approximately 600 children have parents or relatives who also work on the dump and look after them. some of them go to school, but most do not – at least not on a regular basis -and it is safe to say that virtually none of them ever completes a primary school education. the school fees are too high and their families need them to collect rubbish to contribute to the family income. adults earn, on average, 4000 to 5000 riels (US$1.00 to $1.25) a day; children earn on average about half that amount. (source: The Centre for Children’s Happiness ) it makes me angry.
we’re leaving tomorrow for Siem Reap (home of the infamous, Angkor Wat) for a few weeks before we regroup, and go visit Tri in Vietnam, which frankly, we’re really looking foward to. i’m planning on volunteering at a school teaching English in one of the Angkorian temples in Siem Reap, which i’m really quite excited about. i’m calling the principal tomorrow to confirm everything, but it looks like it’s going to work out. i cannot wait to see how a classroom is run, and experience something new.
the internet joint is about to close, so i gotta jet.
love and miss you all. xxxlgt